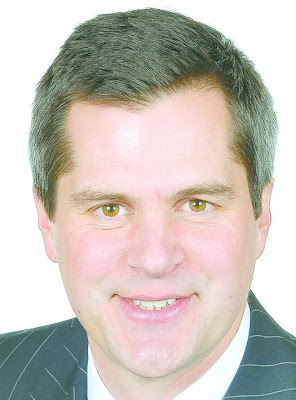 Despite his mezmerizing, hypnotic eyes and robotic serial-killer grin, Rob's positions really don't seem crazy at all.
here's a sampling from his website:

Iowa, Illinois and Indiana all profit from riverboat gambling, and we should do the same. Up and down the Mississippi River and elsewhere, this could generate new revenue ($400-600 million a year), create jobs and promote tourism.

Joint Physical Custody – shared parenting time defined as greater than 45% for both parents - should be the legal presumption. Children have the right to have shared time with BOTH parents.

For medicinal purposes, absolutely. Maybe for other forms of use. Loads of potential tax revenue from legalizing all marijuana, and some would argue the war on marijuana has been lost.

Yes. This is a human and civil rights issue, not a religious issue. Legalize them or get out of the marriage business and just issue union licenses to everyone.

I think if I lived in Minnesota, I might vote for this guy. But unfortunately, he lost out in the race for the Independant Party nomination. And his response was to put out this video:

You know, Rob, you had me then you lost me.

Posted by Professor Chaos at 7:55 PM No comments: