What are conservatives outraged about today?


You know, it must be exhausting being a rightie. Having to scour the news and pop culture media searching trying to find something - anything - that you can use to gin up each day's poutrage. Then having to work yourself up into a lather over it. And to keep having to do this over and over, day after day. It must be absolutely draining!

So, what has the right foaming at the mouth today?

First there was a razor commercial.
I know what you're thinking "did this commercial show a gay person shaving?" No. Well, maybe. I don't know who's gay and who isn't. What this ad did was ask men to not let other men get away with being assholes.

“Boys will be boys”? Isn’t it time we stopped excusing bad behavior? Re-think and take action by joining us at https://t.co/giHuGDEvlT. #TheBestMenCanBe pic.twitter.com/hhBL1XjFVo
— Gillette (@Gillette) January 14, 2019

aSo who could be upset about that? Well, pretty much everyone who makes a living being an asshole on TV or online. Like Piers Morgan, for one.


I know. My eyes still hurt from how hard they involuntarily rolled.

Anyway, Piers was the first one I saw taking umbrage at an ad that says "hey, you know, maybe we could do a little better," but not the last. And for some reason, a lot of the umbrage-takers siezed on D-day as a really terrible analogy.

You will never find a woman in pictures like this. Be better, women. Fight on the front lines and put in 80 hour work weeks. pic.twitter.com/jjj5j3lgvb
— Cartman (@EricCartmenezzz) January 15, 2019


The reason we have the freedoms we enjoy today is because of brave masculine men going beyond the call of duty.#TheBestMenCanBe pic.twitter.com/uQdASHISBg
— Katsumoto (@katsumoto) January 15, 2019 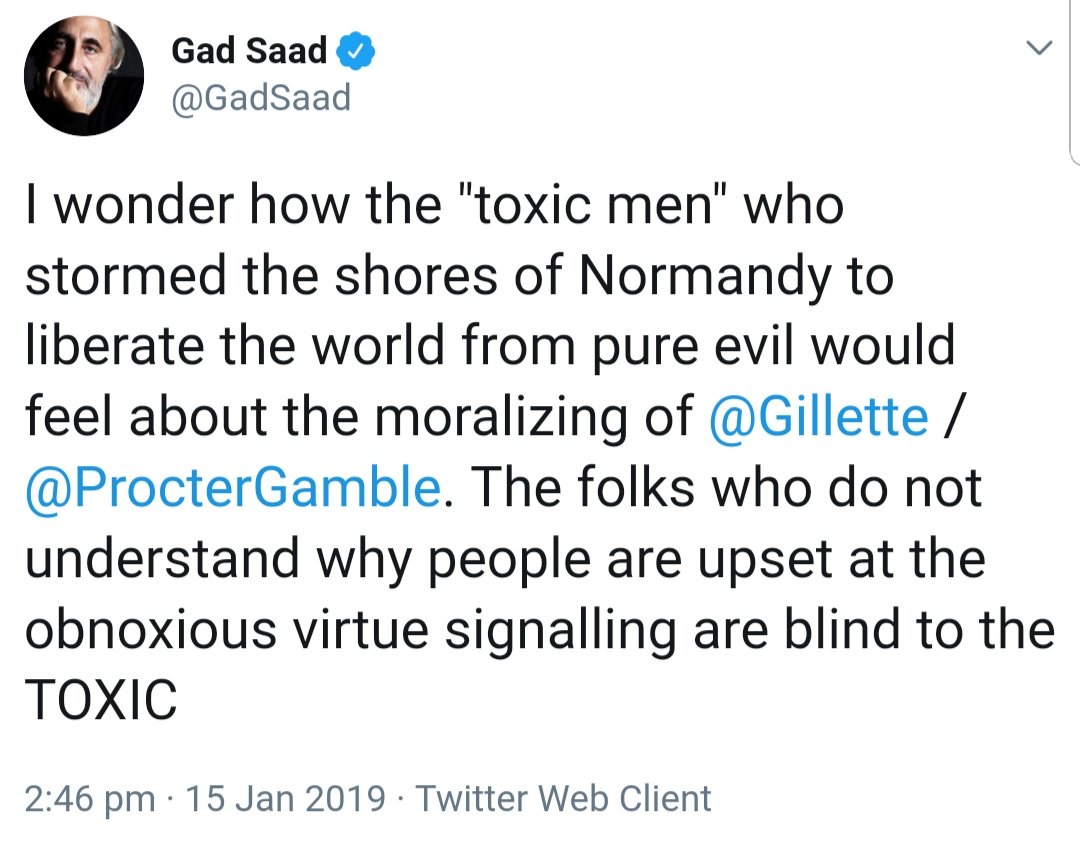 Which makes sense, because when I think of the courage, the valor, the heroism of the Allied troops who stormed the beaches on D-Day, sacrificing life and limb to rid the world of the scourge of Naziism, I think "that's the kind of bravery and mettle that it takes for a man to yell 'shake it, don't break it' at women on the street."

Although, if you're going to use D-day as an analogy, the men in the video who are most not unlike the Allied troops are the ones stopping their friends from harassing women, or chasing the bullies away from the kid they're attacking. They're the ones who are stepping up to right a wrong. Everyone who is upset about this ad. . . you're the Nazis in this analogy.  Great job not understanding fucking anything.

So what else has the right's knickers in a twist?

Apparently, they have found a way to be offended by someone referring to an anti-abortion rally as . . . "anti-abortion."


The "pro-life" movement is literally a movement dedicating to ending the practice of abortion. This is their entire raison d'etre. They oppose abortion. Yet somehow, referring to them as "anti-abortion," is offensive to them? As if it's some sort of disingenuous use of language? To point out the one thing they all oppose?

And it's not only this hack who is Pence's spokesperson or something, but other "pro-lifers" as well.


It’s alright, the next time the Dems propose a tax, I’m sure media outlets will report it as “Democrats propose to steal more money from Americans”
— Bennyboi (@getiinbig) January 15, 2019


Myself and a few other people tried to get someone on this thread to explain what it was that they were upset about. No response.
I assume they don't actually know why they're offended, they just know that they are. They have to be. They NEED to be. They absolutley can not survive without their daily dosage of self-righteous indignation and being in the highest of dudgeons.


And of course, because rule number one for Conservatives remains that no conservative will ever argue anything honestly, she followed up with this nugget:


Because of course she has to pretend that the annual March-For-Life-But-Not-anti-Abortion-Just-Want-To-Outlaw-Abortion is usually ignored in the media. A quick Google search shows that this is not exactly completely accurate.

'You Love Every Child': President Trump Addresses March For Life


Anti-abortion bill passes the House ahead of 'March for Life'

That's just from last year's march. But of course, no one who's following Mike Pence's press secretary on Twitter is going to do the 30 seconds of research required to find this out. Because if they did, they might lose out on some grade A outrage.