Anti-Vax Mom Wouldn’t Take Her Sick Toddler to the Hospital, So Police Intervened


Last weekend Arizona police raided the home of an anti-vaxxer who refused to take her unvaccinated toddler, who had a fever of 105, to the emergency room.

So my first thought was "Good!"
These idiot parents can not be allowed to endanger their children's health because of whatever stupid dumbass beliefs they have.

Then I saw the accompanying picture. 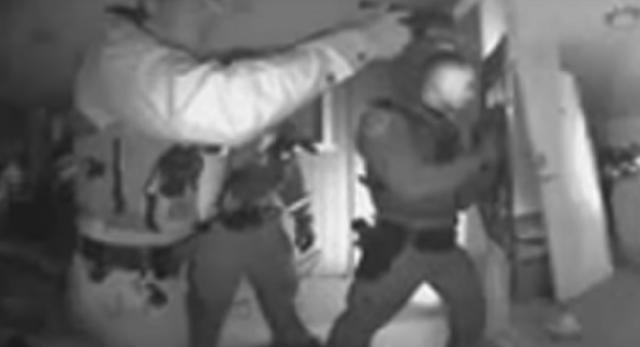 Jesus Christ! We have really come to this.

They kick in the door and storm in, guns drawn, like they're expecting Al Capone to be inside, not a horribly sick child and a couple of  hare-brained parents who aren't trying to harm their child, they're just fucking morons. I'm glad the police intervened. I'm glad the child was taken to the hospital, but how did we get to the point where cops approach every situation like they were going door to door in Fallujah?


Police say that when they arrived at the house with a search warrant, they heard a child coughing inside. After Beck’s husband, Brooks Bryce, refused to let them in, the officers stormed into the home with guns drawn and forcibly removed the sick two-year-old and the couple’s other two children.

But okay. The important thing is that the child was taken to the hospital for proper medical care. The tactics used by the cops can be debated later, at least we can all agree that the end result was a positive.

Well, not all of us apparently.


The incident is raising a lot of important questions about parental rights.

Seriously? people are "concerned" that the parent's rights might have been infringed? Not worrying about the sick toddler, worried about the idiot parents?


Some people, like representative Kelly Townsend, believe that the authorities overstepped. “What has our country become that we can tear down the doorway of a family who has a child with a high fever that disagrees with their doctor?” she said to the Arizona Republic. “What about parents’ rights to decide what’s best for their child?”

Really?
Look, parents have a lot of choices when it comes to how to raise their children. They can choose what, if any, religion to bring them up in. They can decide how strict or permissive to be. They can even infect their kids with horrible political beliefs. But they do NOT - DO NOT - have the right to sit back and watch their child die because they think they know better than their doctor.
"What about parents' rights to decide what's best for their child?" Well, once you decide that what's best for your child is to not have his 105-degree fever treated, you have proven that you are not capable of making those decisions. You have forfeited that right.
And Kelly Townsend feels so upset about these poor parents whose only crime was "disagreeing with their doctor?"
Look, if you don't think that your doctor's advice sounds right, you should absolutely get a second opinion. FROM ANOTHER DOCTOR. You should not just decide that you don't like that advice so you're going to ignore it. I mean, if you're the patient, you're an adult, you can certainly feel free to say "no, I'd rather take my chances with chicken soup and warm thoughts than take medicine," but you do not get to make that decision for your child. You do not have the right to sacrifice your child on the altar of anti-intellectualism. (Praise Jenny McCarthy!)

Where did this idea come from in the first place that a parent automatically knows what's best for their child? There are a lot of stupid parents out there. There are parents who are insane. No matter how well you know your child, you do not know more about her medical needs than her pediatrician. It's absurd!

So, anyway, who is this Kelly Townsend?

I had no idea, so I Googled her.
And I found http://www.electkellytownsend.com/ which is her campaign website. 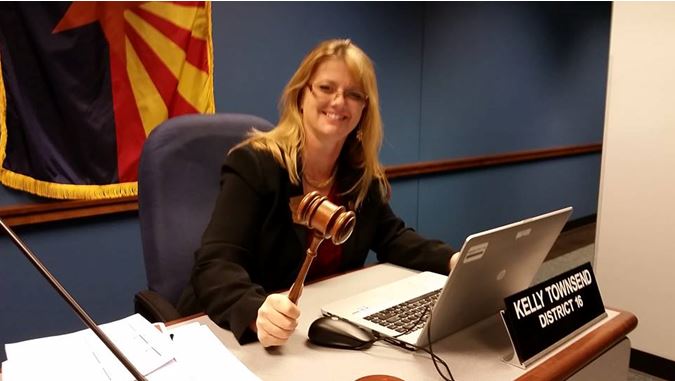 Top and center of the site is an endorsement:

"Kelly is a leader among leaders"
Garrett Humbertson, Convention of States Project


Convention of States Project? That sounds like it might be a bit nutty.
Let's just check the old Googlator. . .

YUP!
Pretty much what you'd think!

WHY CALL A CONVENTION OF STATES?
Simple: to bring power back to the states and the people, where it belongs. Unelected bureaucrats in Washington, D.C. shouldn’t be allowed to make sweeping decisions that impact millions of Americans. But right now, they do. So it all boils down to one question: Who do you think should decide what’s best for you and your family? You, or the feds? We’d vote for the American people every single time.

WHO’S BEHIND THIS THING?

The American people. We thought you’d never ask! The Convention of States Project is first and foremost a movement of grassroots citizens who are fed up with business as usual in D.C. We’re funded by thousands of everyday patriots who have committed their lives, fortunes, and sacred honor to protecting liberty for future generations.

Yeah. They have committed their lives, fortunes and sacred honor. That's a hell of a fancy-ass way to say "signed a petition."

So what are her "Top Issues?"


Did not see that one coming!

And there's this handy illustration of her educational priorities:

I don't know when it became an article of faith amongst the right-wing nutjobs that public schools are teaching kids about "Democratic Socialism."  Has any kid ever come answered the "what did you learn at school today" question with "oh, mommy. Teacher told us all about the pitfalls of unfettered capitalism and how important trade unionism has been historically to the building of a strong working-class identity!"?


Oh. I also found this when I Googled Ms Townsend:


‘Something is in those vaccines’: Lawmaker says mandatory measles shots are ‘Communist’

. . . Republican State Rep. Kelly Townsend, a five-term state representative who is no stranger to making controversial and befuddling statements on social media, took to Facebook on Thursday to bemoan that Arizona was “prepared to give up our liberty, the very sovereignty of our body, because of measles.”


Okay, quick aside here. Kelly Townsend is a Five-term Representative in the state of Arizona. According to her website, these are some of the things she "promotes."


I don't know to how many terms she wants office-holders to be limited, but apparently it's more than five!
Remember when Newt Gingrich and his gaggle of goons brought out that stupid "contract with America?" And one of the things they were going to implement would be term limits? And then it turned out that term limits would only apply to officials elected after the "contract" went into effect? Anyone already in office would be grandfathered in? It's almost as if the people who promote things like term limits actually don't give a single damn about limiting terms. At least not for themselves. Funny that!

Anyway, back to the unhinged rantings of Rep. Townsend.

Townsend demanded that instead of continuing to push for widespread vaccination against the disease, the government and the pharmaceutical industry instead invest money into “discovering what in these vaccines is causing so much injury.”
“The problem is something is in those vaccines,” Townsend said.


Oy. Kelly, Kelly, Kelly. The Communists are not putting harmful things in your child's vaccines. That's crazy. Everyone knows they cause all the harm they need to by putting flouride in the water! It's been proven, wake up, sheeple!

Townsend says her opposition is rooted in her experience. The legislator’s 22-year-old daughter has significant medical problems that she blames on a vaccine she received when she was 10 months old. She says no scientific evidence will convince her otherwise.

Okay, there is something wrong with you, Kelly Townsend. And unfortunately, this something is wrong with a whole lot of Americans these days. You believe that your child's problems were caused by a vaccine. Doctors, scientists, the AMA, the CDC, and the WHO all say that you are incorrect. On their side, they have voluminous research, studies, experiments, knowledge, and education. On the other hand, you have a "gut feeling." And you somehow can't understand that your gut feeling means nothing, while scientific research actually means a whole hell of a lot. See, this is why parents can't be allowed to have complete control over their children's medical decisions. Because too many parents are like Kelly Townsend. And if we let them make important decisions like whether or not to vaccinate their children, or whether or not to take them to the hospital when they are in need of medical care, children will die as a result.

I mean, how irresponsible is it to allow life-or-death decisions to be made by someone who writes something like this?

Representative Kelly Townsend
about a month ago


Our country is sovereign, our State is sovereign, our family is sovereign, our God is sovereign and the most holy and sacred last frontier of sovereignty is our own body.
Dearest friends and people of Arizona, it seems we are prepared to give up our liberty, the very sovereignty of our body, because of measles. I read yesterday that the idea is being floated that if not enough people get vaccinated, then we are going to force them to. The idea that we force someone to give up their liberty for the sake of the collective is not based on American values but rather, Communist.
I have sworn an oath to the Constitution five times, now, and I take that oath very seriously. It was not just something I repeated in order to get sworn in to an office. I do not make my decisions based on my next election or what the populace demands if it violates that oath.
Folks, I am going to ask you to educate your children, educate your family, educate those around you about the fundamentals of liberty and what that means. It seems we have lost those fundamentals along the way and are chasing our fears.
And finally, I am going to demand, as a mother of an injured child from her vaccines, that we insist that we spend the time and money on discovering what in these vaccines is causing so much injury, instead of insisting on taking your liberty in the name of the collective.
Benjamin Franklin once said, "Those who would give up essential Liberty, to purchase a little temporary Safety, deserve neither Liberty nor Safety."
Live free or die,
Rep. Kelly Townsend

Live free or die? Christ, she didn't even get the state right!
Posted by Professor Chaos at 7:03 PM 8 comments: