This week in Magic News

I guess Texas must not have any problems to worry about, because TX Congressman Pete sessions has time to do this:


Texas congressman wants magic to be recognized as a national treasure

Now I assume that when he says "magic" he really means "illusions" because actual magic is, of course, of the Devil and not something that any Republican should be promoting. So, yeah, I'm going to assume he means "illusions" or "tricks."

Anyway, apparently there are no more pressing matters for Congressman Session to attend to, so he's introducing the following resolution:


Whereas magic is an art form with the unique power and potential to impact the lives of all people;

Well, I'll give you it's a unique art form. I don't know how much it is impacting anyone's life.


Whereas magic enables people to experience the impossible;


Whereas magic is used to inspire and bring wonder and happiness to others;

Whereas magic, like the great art forms of dance, literature, theater, film, and the visual arts, allows people to experience something that transcends the written word;


Sure. Although I don't know why you're shitting on the written word, but  -- Oh, right. "Texas."

Whereas futurist Arthur C. Clarke claimed that any sufficiently advanced technology is indistinguishable from magic;

Okay, I'm not so sure that Arthur C. Clarke was all that great a futurist considering that we still don't have the technology he promised us in 2001. Also, I think most people can distinguish technology from magic.

Whereas one of the greatest artists of all time, Leonardo da Vinci, was inspired by magic and co-wrote one of the very first books on magic in the late 15th century;

You're arguing that magic should be a "national treasure" of this nation based on the writings of a pre-Columbian Italian?


Whereas modern cinema would not exist today without the innovative work of the accomplished magician Georges Méliès;


Nothing against Georges Méliès, who was brilliant, but I'm pretty sure George Lucas could have made Star Wars without having seen A Trip To The Moon.

Whereas magicians are visual storytellers who seamlessly interweave elements of mystery, wonder, emotion, and expression;

I don't know how much emotion or storytelling is involved in the phrase "pick a card, pick any card."


Whereas the American magicians Harry Houdini and David Copperfield have been the most successful magicians of the past two centuries;

Whereas David Copperfield, introduced to magic as a boy growing up in New Jersey, has been named a Living Legend by the Library of Congress;


Um, is this turning into a commercial for David Copperfield?


Whereas David Copperfield, with 21 Emmy Awards, 11 Guinness World Records, and over four billion dollars in ticket sales, has impacted every aspect of the global entertainment industry;

Also, wait. David Copperfield has impacted "every aspect" of the entertainment industry? Really? Are there a lot of pop songs written about making the Statue of Liberty disappear? Are there lavish Broadway musicals about sawing ladies in half? I'll stipulate that he's great at what he does, but has he really impacted the world of premium cable TV dramas? Or sitcoms? Or stand-up comedy?

Whereas David Copperfield, through his magic, inspires great positive change in the lives of Americans;


Oh my God, again with Copperfield? Why not just propose giving David Copperfield landmark status, or the Kennedy Center honors or whatever? Also, I'd love an example of someone who made positive changes in their life due to being inspired by the magic of David Copperfield.

Okay. But it really sounds like she was already pursuing dance. She certainly didn't get good enough to book a show after just 3 months. Also, I've been to Portland, and pretty much anyone can dance in Pioneer Square. It doesn't make you a dancer. 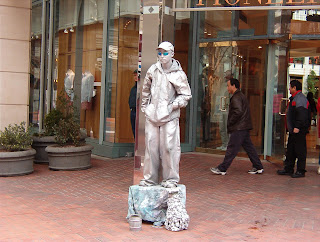 
Whereas people consistently leave David Copperfield’s live magic show with a different perspective than when they entered;


Really? How? How has anyone's perspective been changed by watching a magic show? Do they not know it's a trick? Smoke and mirrors, whatever? Do people actually leave a Copperfield show thinking "wow, I never realized that magic really does exist. Thank God I witnessed this powerful wizard at work! Perhaps I should re-apply to Hogwart's."

Whereas there is not an effective national effort to support and preserve magic;


Sure there is. It's called Kid's birthday parties!

Resolved, That the House of Representatives—
(1) recognizes magic as a rare and valuable art form and national treasure; and
(2) supports efforts to make certain that magic is preserved, understood, and promulgated.


Understood? If you understand it, doesn't that take all the fun out of it?
And one would think that Congress might be more interested in preserving and promulgating, oh I don't know, clean drinking water? The nation's manufacturing base? The middle class?

You know, Congressman Sessions, it's not too late for you to become a magician. It seems obvious that you are a frustrated illusionist. Why not resign from Congress and pursue magic as a second career? God knows you aren't doing anyone any good in your current position.

P.S. For the record, I love magic.
Sorry, "Illusions."