God Gets a Copy Editor

The tongue-speaking, snake-handling, rapture-awaiting fanatics who brought us "Conservapedia" (to combat Wikipedia's obvious lefty bias) apparently took a little time off from thumping their Bibles and actually read a little of it. And they weren't happy with what they found.
"Hey, you know this Jesus fella we're always shouting about? Turns out he was kind of a hippie-dippie pinko. Always talking about loving your neighbor and helping the poor, and not judging people."
So when you discover that your political viewpoint is not really supported by the book you claim to follow, what do you do? Simple. Re-write the Bible. 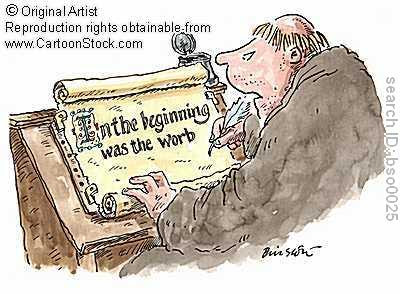 They're calling it the Conservative Bible Project, and they are dead serious!

As of 2009, there is no fully conservative translation of the Bible which satisfies the following ten guidelines
So, yeah. The idea is that in the 2000 or so years since the New testament was written, no one has ever written a good enough version. They keep portraying Jesus like this: 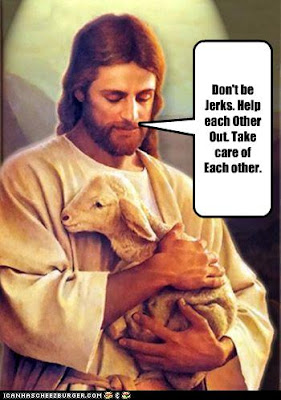 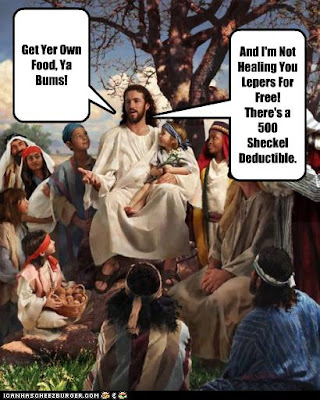 This is how serious these guys are about fixing the Bible:

Jesus said, "Father, forgive them, for they do not know what they are doing."

Is this a liberal corruption of the original? This does not appear in any other Gospel, and the simple fact is that some of the persecutors of Jesus did know what they were doing. This quotation is a favorite of liberals but should not appear in a conservative Bible.

That's right. If Jesus says something that doesn't jibe with your right-wing world view, then obviously it's Jesus who's wrong. So remove that verse from the text.

Now this is fine if you are not a Christian. A non-Christian person could expect to find lots of things in the Bible he disagrees with and can assume that the Bible is wrong. That's perfectly rational. But you can't be a fundamentalist Bible-Thumper and then say, "well, Jesus was the Holy, infallible Son of God, but obviously he was way off on that one!" Either you worship the guy or you don't. If you believe that Jesus was just a rabbi who attracted a large following, then was killed by the Romans, then of course you can say, "Jesus was right about that but wrong about this," because of course, as a mere mortal, he would be wrong about a lot of things. But then you can't turn around and say, "Oh, and also, he was God."

At Luke 16:8, the NIV describes an enigmatic parable in which the "master commended the dishonest manager because he had acted shrewdly." But is "shrewdly", which has connotations of dishonesty, the best term here? Being dishonestly shrewd is not an admirable trait.

The better conservative term, which became available only in 1851, is "resourceful". The manager was praised for being "resourceful", which is very different from dishonesty. Yet not even the ESV, which was published in 2001, contains a single use of the term "resourceful" in its entire translation of the Bible.

So it's not important which word is the more accurate translation. What matters is which word has a more conservative feel?

Socialistic terminology permeates English translations of the Bible, without justification. This improperly encourages the "social justice" movement among Christians.

For example, the conservative word "volunteer" is mentioned only once in the ESV, yet the socialistic word "comrade" is used three times, "laborer(s)" is used 13 times, "labored" 15 times, and "fellow" (as in "fellow worker") is used 55 times.

This is just head-hurtingly stupid. First of all, it may surprise you to learn that, although no one really knows exactly when the Bible was written, it was definitely written prior to the Bolshevik Revolution. So the word "comrade" probably wasn't being used as a pro-Soviet term.And honestly, if you have a problem with the fact that Jesus talked a lot about workers or laborers, you should probably take it up with him. Here, you can borrow my time machine. Yes, I know it looks like an abandoned refrigerator, but trust me, just get in, close the door, and you'll be talking to Jesus in no time! 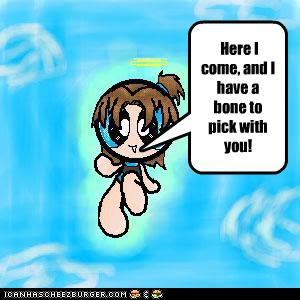 Framework against Liberal Bias: providing a strong framework that enables a thought-for-thought translation without corruption by liberal bias

That doesn't really seem to mean anything. I think maybe it's just there so the list adds up to ten.

Not Emasculated: avoiding unisex, "gender inclusive" language, and other modern emasculation of Christianity

Not Dumbed Down: not dumbing down the reading level, or diluting the intellectual force and logic of Christianity; the NIV is written at only the 7th grade level

So number three seems reasonable, except when compared to number ten:

Prefer Conciseness over Liberal Wordiness: preferring conciseness to the liberal style of high word-to-substance ratio; avoid compound negatives and unnecessary ambiguities; prefer concise, consistent use of the word "Lord" rather than "Jehovah" or "Yahweh" or "Lord God."

So the translation should not be "dumbed down" (because God forbid a seventh-grader be able to understand your religious teachings) but also written as simply as possible. Good luck with that!

Utilize Powerful Conservative Terms: using powerful new conservative terms as they develop;[4] defective translations use the word "comrade" three times as often as "volunteer"; similarly, updating words which have a change in meaning, such as "word", "peace", and "miracle".

Oh, and hey, while we're at it, let's replace the word "Jesus" with the word "Reagan," and instead of "disciples" let's call them "teabaggers."

Yeah, if the King James Version I grew up with had used the term "register" rather than "enroll," I probably would have grown up to be a FOX watching Republican.

Accept the Logic of Hell: applying logic with its full force and effect, as in not denying or downplaying the very real existence of Hell or the Devil.

because, you know most translations include the phrase "hey, don't worry about it, there's no hell or devil." Also, what exactly does logic have to do with the existence or non-existence of Hell? Logically, it would seem like if God loved his children, he probably wouldn't have a lake of fire to cast them into. 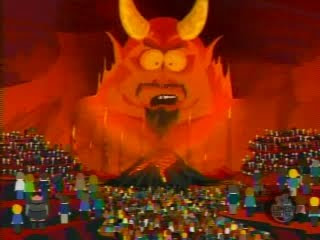 I seem to recall that most of the parables had to do with people getting into Heaven or not getting in, but yeah, obviously that has to do with the free market!

Exclude Later-Inserted Liberal Passages: excluding the later-inserted liberal passages that are not authentic, such as the adulteress story

The adulteress story? Okay, I'll click on the link to see what story they're talking about.

Oh, the "whoever is without sin cast the first stone" story. Yeah, let's get rid of that story, then we can throw stones at people whenever we want!

Credit Open-Mindedness of Disciples: crediting open-mindedness, often found in youngsters like the eyewitnesses Mark and John, the authors of two of the Gospels

Since when is open-mindedness considered a positive virtue by these people? Don't open-minded people sometimes question the dogma they are given? Maybe the term has a different meaning in Insanistan.

So, to summarize, I think the point of the Conservative Bible Project is this:

The Bible would be a really good book, if we just took that Jesus guy out of it.