People who need to sit down and shut up

On Friday, perhaps after celebrating with a few green beers, Clarke took to the official Facebook page of the Sheriff's Office to have his tantrum:
Comment from Sheriff Clarke in response to Barrett’s recent remarks about the sheriff:
“The last time Tom Barrett showed up at a crime scene he got his ass kicked by a drunk, tire-iron-wielding man who beat him within inches of his life. The milquetoast mayor trying to play cop foolishly thought he could simply talk the man who beat him senseless into backing down. Bet he won't try that again!
Timid Tom should leave policing to the professionals like me, and stick to coming up with a plan to reduce the violence, carjackings, random shootings that leave children dead, and the burglary ring currently plaguing the north side of Milwaukee.. . . Whoever told Barrett it was a good idea to come out of hiding and take shots at me gave him some bad advice. I will give Tom "Mr. Peepers" Barrett this much credit however - he would know what a crime scene looks like because Milwaukee is full of them. If you had to call for help, who would you rather see show up, me or timid Tom? Time to crawl back into your hole Tom, unless you want some more of this because I have some.”

Okay, first of all, if you're gonna swagger around like a tough guy, threatening him with another round of mockery is pretty weak sauce.
Secondly, it's pretty pathetic to complain about how crime-ridden your city is when you're the fucking sheriff!
And third, I don't think that a man who confronts an angry, tire-iron-wielding criminal can really be described as "timid." Democrats long complained about the way Republicans treated President Barack Obama. When Republicans refused to cooperate on legislation, when they threatened to shut down the government, when they stonewalled his Supreme Court nominee, Democrats lambasted them -- and justifiably so -- for dereliction of duty. Yet now that Donald Trump is in the White House, Democrats are threatening to adopt the very same tactics, concluding that they need to fight like Republicans. In other words, it’s their turn to act irresponsibly.
Of course, what goes around comes around, and the hunger for payback among Democrats is understandable. But the rule we all teach our children applies to Congress as well: Two wrongs don’t make a right


Ugh, I am so sick of this shit. I am so goddamm sick and tired of Democrats/Progressives/Liberals being told that we have to be the bigger person. It's like a parent telling the older child to just let the younger one have his way so he'll stop throwing a tantrum.

And this isn't even about the need for one party to be the grownup in the room so that some sense of decorum or maturity or whatever can somehow be restored to Washington. This is about the future of our country. This is about a Supreme Court justice that will serve for a generation, creating precedents and upholding or striking down laws that affect peoples' lives. And the only reason that this Gorsuch is even a possibility is because Republicans threw the tantrum of all tantrums and, in an unprecedented display of fucketry, refused to even consider any nominee from the last administration. Some even stuck out their lower lips and said they were happy to let the seat go unfilled for four more years should Hillary Clinton be the next President. And they got away with it in part because the Democrats felt obligated to be the bigger persons. The Democrats felt the need to be the mature adults in the room. They should have been in front of every camera and microphone they could find screaming bloody murder over this sickening display of rank partisanship, this utter disdain for 200 years of process. And the President could have and should have put Garland through as a recess appointment, or had Biden gavel in the Senate before the new members were sworn in just to vote on the nomination, but he didn't. Because he had to be the bigger man. And look where that got us.


So when a patrician little pipsqueak like Mike Bloomberg who won't personally feel the effect of any Supreme Court decision on his life, wants to tell the Democrats to be the grownups, I have just one thing to say to him:

HUCKABEE: Well, it's springtime. It's time for the snowflakes to melt and accept the fact that Donald Trump is president. And if that is her message, she can be very honest and say look, we don't have to like what he proposes. We don't have to like him, but we have to accept that he is the president and we have to respect the office of the presidency.

Don't you mean it's time to pretend that the president isn't an American citizen? Or that it's time to accuse the President of being in league with terrorists? Or of being a gay-married, abortion-supporting enforcer of Sharia Law? Because you can't seriously be calling on people to "accept" the President and "respect the office" after the way you and your FOX buddies spent the last eight years.

If she would say that, then I'll believe she's trying to bring us together. If all she's going to do is raise her fist in the air and say resist, well look, it's too late to resist. That's what we do every four years. It's called an election. Donald Trump won and people need to accept it. Again, they don't have to like it.


This is America. We're free to disagree. But we're not free to try to delegitimize the duly elected president of the United States.


Wow. "It's too late to resist" is probably the most terrifying thing I have ever heard a public figure say.

And as for "we are not free to delegitimize the president," I don't know what's worse. The stunning level of hypocrisy, or the utter failure to grasp how the 1st Amendment works. Either way, sit down and shut up, Gomer! 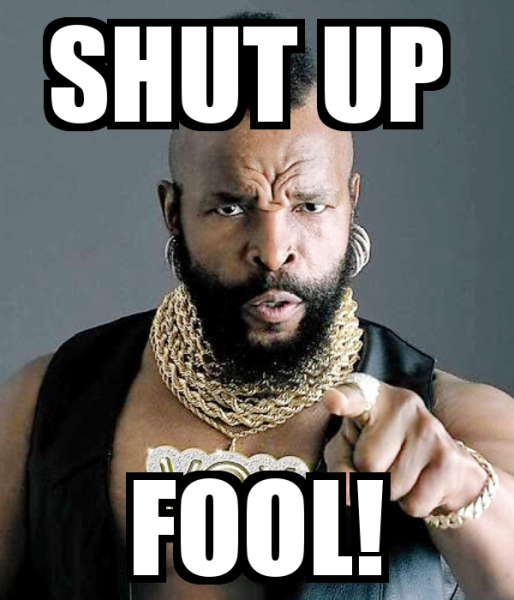 In this town, I’m not kidding, you gotta be real careful around here, you know, you can get beat up if you don’t believe what everybody believes. This is like ’30s Germany! I don’t know what, I don’t know what happened. If you’re not part of the group—“You know, what we believe is right … ” I go, “Well, I might have a problem with that.” I’m a comedian—I like going on both sides.


No.
Jeezus Christ, you right-wing crybabies have no perspective.
"Ooh, I didn't get the part I was up for. This must be what it was like on the Trail of Tears!"
"My agent isn't returning my calls. Now I know what the Bataan Death March was like!"
Being a conservative in Hollywood is like 1930s Germany? Fuck you it isn't.

Who has gotten "beat up" by Hollywood liberals? I know you haven't. You haven't even had trouble finding employment. You're the "star" of yet another awful sit-com despite your one-note, two-dimensional "acting" style and utter inability to be at all funny.  You haven't been persecuted. And neither have Kelsey Grammer, Jon Voight, Patricia Heaton, or any of the other Hollywood conservatives. When you keep getting paid huge sums of money to appear in movies and tv shows, it's pretty pathetic to whine about how tough you have it in Hollywood.
And even if you were being blackballed from showbiz, even if you did find it socially uncomfortable to express your conservative vbiews, no one is herding you poor, beleaguered right-wing actors onto train cars headed for death camps which is ACTUALLY WHAT HAPPENED TO PEOPLE IN 1930s GERMANY YOU GODDAMM PIECE OF SHIT!