The Pope is coming! And the imminent arrival of his eminence gives us yet another opportunity to take pride in America! Or not. . .

. . . last week, four House members — Democrats Dan Lipinski (Ill.), Juan Vargas (Calif.), and Republicans Jeff Fortenberry (Neb.) and Tim Murphy (Pa.) sent a letter to House Speaker John Boehner and Democratic Leader Nancy  Pelosi, asking them to put out some sort of guidance “to the House and Senate on the appropriate decorum, protocol and behavior. . . .”
Members could use info on “how to greet the Pope, proper attire [no jeans?] . . . among other matters of etiquette,” the letter said.

No jean?
Jeans?
You really have to ask about jeans?

I'm not Catholic, so correct me if I'm wrong,  but I'm pretty sure Pope-meeting protocol is not that difficult. I'm pretty sure you are no longer expected to kneel and kiss his ring, although if you are a practicing Catholic, that might be a nice gesture. Basically, he's the head of state of the Nation of Vatican City. You treat him as you would any visiting head of state, except instead of "your highness" or "your excellency," he is generally addressed as "Your Holiness," as befitting his position as Head of a major religion. Same as you would if you met the Dalai Lama.Or Joe Montana.


We are hearing that Boehner and Pelosi are indeed now working on a “guidance card” of some sort to members to, as the letter notes, ensure “proper respect for the Pope” and “avoiding anything that could be construed as politicizing or making a spectacle of his visit.”

Okay, it really doesn't seem like this should have been neccessary, but here are a few do's and don'ts when meeting the Pope:

1. No High-fiving the Pope. Also no fist-taps or chest bumps.

3. It is perfectly acceptable to refer to the pontiff as "Il Papa." Do not, however, point to him and shout "The Ill Papa in the House!"

4. He's German. Don't mention the war!
(Rule no longer applicable since the resignation of Benedict I)

5.  Do not try to ingratiate yourself with His Holiness by telling him "the one about the Jew, the Muslim and the Protestant."

6. Do not nail anything to his hotel room door. (Looking at you, Lutherans!)

7. It is perfectly acceptable to offer the Pope a cocktail. However, should he decline, do not suggest that he "stop being a pussy."

8. It is a grievous breach of etiquette to ask the Pope, or indeed any member of the clergy, if he has been "gettin' any."

9. The Pope speaks fluent Spanish. However, do not attempt to deport him.

10. NO JEANS! You are a member of Congress greeting a foreign dignitary. not some college kid at Bonaroo. Jeezus!


Full disclosure: The Missus and I did wear jeans when we were granted an audience with His Holiness Francis I, but we are just a couple of humble pilgrims, not representatives of the United States Govenrment, so I think it was probably okay. 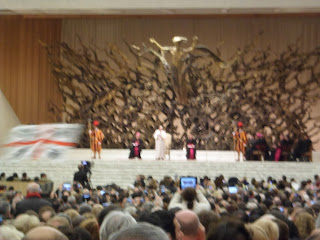 Not sure who Alexander Wang is, but this is from his latest "Do Something" ad campaign:

Do something? And your model is Kim Kardashian? The woman who has made a lucrative career out of doing nothing?
Seriously, what has she ever done? She lets cameras follow her around while she flits about her mansion prattling about nothing.

The other folks in this campaign make sense:

"The Weekend": I had to Google him, but apparently a successful musician.

Jhene Aiko: I had to Google her, but apparently she's a successful singer and songwriter.

Kanye West: Enormous bag of douche, but very talented and successful rapper.
Maybe Kanye insisted they include Kim?  He does seem to have a lot invested in keeping up the illusion that she has some sort of talent or ability or is in some way not a waste of space.