When did society go this far off the rails?


Long a lightning rod for conservative criticism, the Girl Scouts of the USA are now facing their highest-level challenge yet: An official inquiry by the U.S. Conference of Catholic Bishops.

Really? Is that true? Have the freakin' girl scouts, the adorable little darlings who bring us cookies, been attacked by right-wing loonies before this year? I guess I shouldn't be surprised  by anything anymore, especially anything that involves right-wing religious nuts being afraid of anything female.


At issue are concerns about program materials that some Catholics find offensive, as well as assertions that the Scouts associate with other groups espousing stances that conflict with church teaching.

Some of the concerns raised by Catholic critics are recycled complaints that have been denied by the Girl Scouts’ head office repeatedly and categorically. It says it has no partnership with Planned Parenthood, and does not take positions on sexuality, birth control and abortion.

But they could, the point is that they could partner up with Planned Parenthood and teach little girls about abortion, so I think it's important that we go ahead and fly into a blind, stupid rage right now just in case.

But what's to stop them from becoming this:

Although that's not as scary as the idea of a girl playing baseball, apparently.


PHOENIX -- Instead of playing in a championship baseball game, Paige Sultzbach and her team won't even make it to the dugout.

A Phoenix school that was scheduled to play the 15-year-old Mesa girl and her male teammates forfeited the game rather than face a female player.

You know, that might make sense if it was football or wrestling or something, but baseball? Why would you refuse to play against a girl in baseball?


Paige, who plays second base at Mesa Prep, had to sit out two previous games against Our Lady of Sorrows out of respect for its beliefs.

Yeah, I'm pretty sure that those are not beliefs worthy of respect. Why should the girl have to sit out because of the other team's idiocy?


Officials at Our Lady of Sorrows declined comment. In a written statement Thursday, the school said the decision to forfeit was consistent with a policy prohibiting co-ed sports.

The statement also said the school teaches boys respect by not placing girls in athletic competition, where "proper boundaries can only be respected with difficulty."


Also, we don't really understand what the word "respect" means.

So basically, proper boundaries means what, exactly? Boys and girls shouldn't be within 60' 6" of each other? 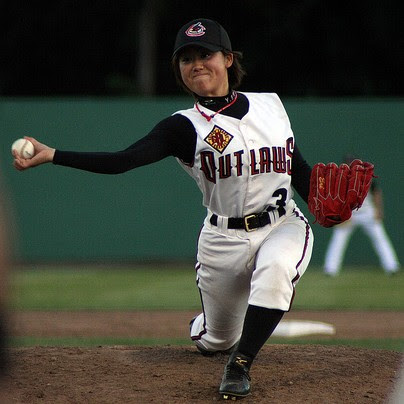 Actually, that is pretty scary!

The bill features Queen Elizabeth II, who is celebrating her Diamond Jubilee this year, on the front of the note. The back pays tribute to the sacrifices of Canadian men and women in military conflicts with an image of the Canadian National Vimy Memorial.

However, some people have called elements of the bill "pornographic," while others have noted a resemblance to the Twin Towers that used to stand in lower Manhattan.

How can it be pornographic and also bear a resemblance to two buildings?

This is the bill in question:

So, yeah, the two monuments on the right bear a slight resemblance to the WTC, as do any 2 rectangular objects.

Not cool, man. Too soon.

But where's the pornographic part? Goddammit, I did not go all the way to Canada to come back with freakin' PG-13 money!﻿

The part of the memorial apparently causing some Canadians to blush is a depiction of some of the most senior figures, a group of women — sans clothes — known as the chorus. One person said the naked woman is going to "offend someone." Here's a close-up of the provocative image, depicting the Vimy figures: 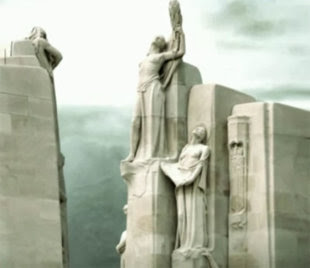 How in the hell are we more bothered by tits now than in 1936? We are less sophisticated than we were in 1936! Think about that! No, don't, it'll make your head hurt.

But the biggest problem may be that the Vimy’s double-columned design, draped with semi-clad classical figures, manages to evoke both the ill-fated Twin Towers of New York City and softcore porn. “When you quickly glance at it, and if I didn’t know any better, it looks like the Twin Towers,” one focus group participant said, according to documents from Toronto market research firm The Strategic Council obtained by Canadian broadcaster CTV News. Critics called special attention to the figures draped revealingly across the top of the monument, meant to represent Justice and Peace. “It’s too pornographic,” a cash handler in Toronto told researchers. “What is the woman on the top holding?”
Read more: http://newsfeed.time.com/2012/05/11/dirty-money-is-canadas-new-20-bill-pornographic/#ixzz1uciBbFpd

And that's in Toronto. Toronto is a major metroploitan um, metropolis. This isn't the Canadian version of  Sisterwife, Utah or something.


We're not only less sophisticated about the female body than we were in 1936, we're more prudish than they were in 100 BC!


For fuck's sake, when did society become so terrified of anything female?
Posted by Professor Chaos at 11:50 PM 3 comments: