Headlines that Show America is Fucked.


I saw this on Twitter or Tumblr or something earlier today:

[A] group of 43 senators — 29 Republicans and 14 Democrats — wants to implement a law that would make it a felony for Americans to support the international boycott against Israel, which was launched in protest of that country’s decades-old occupation of Palestine. The two primary sponsors of the bill are Democrat Ben Cardin of Maryland and Republican Rob Portman of Ohio. Perhaps the most shocking aspect is the punishment: Anyone guilty of violating the prohibitions will face a minimum civil penalty of $250,000 and a maximum criminal penalty of $1 million and 20 years in prison.

Okay, that can't be true, right? I mean, I know that US politicians all feel some pathetic compulsion to kiss Israel's ass in order to placate the tongue speakers and snake handlers who are afraid that the apocalypse might not be able to happen if Israel isn't restored to its Old Testament boundaries or something. I know that, but this has to be a misunderstanding, right? I mean, there's no way that you could actually think you could make a law banning private citizens from participating in a boycott, right?


Wait, what? That's actually what the bill is called? But it can't really mean that people can't choose whom to support with their dollars, right?

The bill prohibits U.S. persons engaged in interstate or foreign commerce from:

Here is a list of the bill's co-sponsors, which includes shining lights of the Democratic Party like Chuck Schumer and Claire McCaskill and a bunch of other bums who ought to be getting primaried in the next election: https://www.congress.gov/bill/115th-congress/senate-bill/720/cosponsors

Then I saw this headline that is as good an indication as anything of the depths to which this country has sunk and what a struggle it is going to be to restore a tiny bit of sanity:


Trump voters don’t think Donald Trump Jr. met with Russia, even after he said he did: poll

How. . . how is that even possible? He's not even denying it, and they still think it's #FakeNews? How is that possible?

It's like if everyone in town is whispering about their wife having an affair and they say "no, not my wife, she would never!" and then she comes to them and says "honey, I have to confess, I've been sleeping with your friends, all of your friends, all the time, every chance I get," and they're still sitting there going "no, my wife would never be unfaithful. Not her!"

The survey by Public Policy Polling found that, even though Donald Trump Jr. has admitted to meeting with Russia to get dirt on Hillary Clinton, only 45 percent of Trump voters believe that that meeting actually occurred, with 32 percent claiming that it never happened and 24 percent saying they aren’t sure.

Despite Donald Trump Jr.’s own emails including an admission by a Kremlin-connected lawyer about how “Russia and its government’s support for Mr. Trump,” only 26 percent of Trump voters will admit that Russia was pulling for Trump to win the election, while 44 percent support the baseless belief that they wanted Hillary Clinton to win and 31 percent saying they’re not sure.

If basic facts can no longer be accepted as being basic facts (and they apparently can not, see: the world is getting warmer) how can we possibly continue as a civilization? If everyone gets to choose their own reality, how can a society function? We're fucked.


Yeah, but not really, though. Right? Right?


Mike Cernovich is the sort of person that makes you question whether the internet is a good idea. An outspoken promoter of the false claim that a pizza restaurant in Washington, D.C. was a front for a pedophile ring involving Hillary Clinton, Cernovich offers men advice like “misogyny gets you laid” and “the hotter the sex, the more closely it resembles rape.”

Ah, fuck! It is him. Mike fucking Cernovich. And a candidate for the US Senate is throwing in his lot with this sick piece of shit. In 2017. God damn it!
This guy: 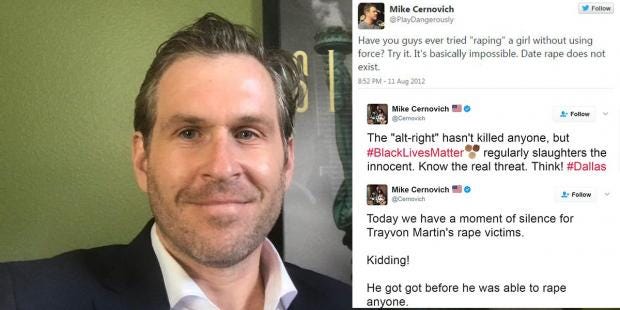 Of course, this is the guy that Don tRump Jr. said should win a Pulitzer, so I guess I shouldn't be so surprised.
Still, though, it really seems like supporting a sick twitch like Cernovich would be beyond the pale even in this degenerate political climate.

This is the guy the White House is promoting today, in case for a second you thought this wasn't all a dumpster fire. pic.twitter.com/iiVdxPWLBf
— Kyle Foley (@KFoleyFL) April 4, 2017

Apropos of nothing, Fuck Joe Scarborough. Morning Joe pimped tRump's candidacy as much as any FOX show. Joe kept inviting tRump to be a guest on his sow after he said that Mexicans were rapists. He kept promoting tRump after he mocked a disabled person. He kept letting him call in to spew his bullshit after he complained about Megyn Kelly having "blood coming out of her wherever."
But once Il Douche throws alittle shade at Joe and Minka, suddenly, Scarborough's all "hey, maybe this isn't such a great guy!" Hey, maybe an incompetent, senile failed businessman with a long history of racism and misogyny isn't the best choice to lead our nation." Fuck you, Joe. After all the shit Cheeto Mussolini said and did during the last year or so - insulting P.O.W's, talking about his tiny dick during a Presidential debate, encouraging his supporters to beat up protesters - all that and you had no problem with him, but suddenly you're going to get your back up because he insulted your wife and now you're, what, joining the #Resistance? Get off the air, you hack.