Ye, Micheal Jackson was a terrific singer and a hell of a showman, but what the hell good has he been for the last, oh, decade or so? What was the last decent song he put out? "Black or White"? Honestly, the guy peaked in what, like 1975? Yeah "Thriller" had like 500 hit singles, but admit it, they all sucked.
Look at some of these lyrics:

"Showin' How Funky Strong Is Your Fight" What the fuck is that even supposed to mean?

"They'll Kick You, Then They Beat You, Then They'll Tell You It's Fair" So these gang-bangers are going to take the time, after beating and kicking you to explain that, although it may seem unfair, by their code of ethics, this ass-kicking was actually fair?

"'Cause This Is Thriller, Thriller Night.There Ain't No Second Chance Against The Thing With Forty Eyes." Wow!

"Someone's Always Tryin' To Start My Baby Cryin', Talkin', Squealin', Lyin'" This must be the most hated woman on the planet! People are constantly trying to make her cry!

Anyway, the poor guy's been a slow-motion train wreck for the past 20 years at least, he's going to be remembered more for being tabloid fodder than for any of his musical accomplishments.

But that's not even the point. The point is, why are we all supposed to be so broken up about the death of a man that we've never met? Why is it assumed that we all are supposed to feel some sort of intense personal connection to a total stranger just because we've seen him on TV and listened to his records? What does this say about us as a society when all our 24-hour news channels can just put the wars, the economy, and everything else on hold because a singer died?

The only upside is that jackson died just in time to save us from the Let's-pretend-to-
care-about-Farrah-Fawcett-festival that would otherwise have been in store for us.

For you younger folks out there, farrah Fawcett was an alleged actress and alleged beauty who starred for four years in a ridiculous Aaron Spelling detective show, then several lousy made-for-Tv movies. But she is most well-known for having had nipples: 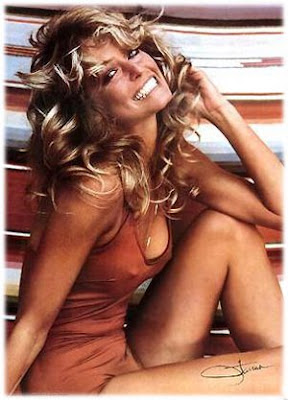 Apparently, we all mourn her passing.
Posted by Professor Chaos at 12:08 AM No comments: