Ratchetting up the Crazy

See, the problem with building a movement around paranoia, is that it's just a matter of time until the paranoids turn on you. I swear, this is her picture from her website!

Glenn Beck, think before you preach

Something very disturbing happened today on FOX. Glenn Beck, who has, for the most part, steered clear of jihad, sharia and Islamic supremacism, put his toe in the water, and for the first time since I started fighting the long war, I got nervous.

Okay, Glenn, I don't know what you said, but something convinced Pam Geller that you are flirting with jihad, sharia, and Islamic Supremacism. What did you say? "Allahu Akbar?" "Death to America?"

Okay, I didn't know who that was, either, so I looked it up.

From the London Daily Telegraph:

Geert Wilders, the far-right Dutch politician, has used a visit to London to launch an attack on Islam.

And the Guardian refers to him as:
Geert Wilders, the Dutch far-right anti-immigrant maverick

According to his Wikipedia page, Wilder has proposed:

Replacement of the present Article 1 of the Dutch constitution, guaranteeing equality under the law, by a clause stating the cultural dominance of the Christian, Jewish and humanist traditions.

A five-year ban on the founding of mosques and Islamic schools; Foreign imams will not be allowed to preach.

So, referring to him as "far-right" or even "fascist" doesn't seem like a real radical departure from other mainstream views of Wilder.
So, what's the problem?

What is he doing?

Why would he stigmatize Wilders this way? Wilders is the embodiment of what our founding fathers extolled. Individual rights. Freedom of speech. Not sharia law.

Freedom of speech. Except for foreign-born Imams. Individual rights, except the right to build a house of worship of your choosing. Sounds just like John Adams!

Beck is out of his depth in this. You cannot get up to speed on Europe in one crash course. The Islamic/left-wing fringe is everywhere, but what right fringe is he talking about in Europe?

Really! I don't think there is any right-wing fringe in Europe! 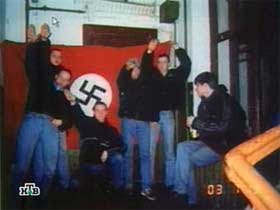 
Aaaanywayy. . .
You think it's just one crazy lady?
Here are some of the comments readers have left on her blog:

Haven't you heard Pam? Glenn has taken the blood money and changed sides on us. He now works for the Elites as their newest little bitch. He is spreading all types of lies these days.

He is paid by a muslim so he must make his masters happy. He also now believes in global warming. So defending islam is not even a stretch for him.

I regard both Beck and O' Rielly as sell outs along with Fox.

Glenn Beck is a fraud and a traitor. He scorns those who question Obo's eligibilty.

I'm completely disgusted with Beck. . . what good is he in fighting socialist infiltration of our government if only to pave the way for an islamic takeover?

Since Murdoch and Saudi strengthened their financial ties, Fox News has gone the way of CNN. It's over for Fox News being "fair and balanced." It's going to hell along with Murdoch, Beck, and O'Reilly, who've all sold their souls to the devil.

That's right, Glenn. The DEVIL! You made one criticism of some Dutch nutbag, and in their eyes, you've sold your soul to the devil.
Hell, even inflatable hate doll Michelle malkin has turned on you: http://www.politicususa.com/en/malkin-beck-eric-massa

So, maybe that's why you felt the need to ratchet up the crazy?

On his daily radio and television shows last week, Fox News personality Glenn Beck set out to convince his audience that "social justice," the term many Christian churches use to describe their efforts to address poverty and human rights, is a "code word" for communism and Nazism. Beck urged Christians to discuss the term with their priests and to leave their churches if leaders would not reconsider their emphasis on social justice.

Damn! You know how to bring the freakin' insanity! I can't believe I underestimated you! That is just head-spinning, pea-soup-spitting, cut-your-ear-off-and-mail-it-to-a-hooker CUH-RAZEE!

Churches who try to, say, help the poor, feed the hungry, you know, all that Jesus-y stuff, are really Commu-Nazis? Well, bark at the moon, my friend, you have kicked it up another notch!

"I'm begging you, your right to religion and freedom to exercise religion and read all of the passages of the Bible as you want to read them and as your church wants to preach them . . . are going to come under the ropes in the next year. . . I beg you, look for the words 'social justice' or 'economic justice' on your church Web site. If you find it, run as fast as you can. Social justice and economic justice, they are code words. Now, am I advising people to leave their church? Yes!"

So, if you want the freedom to read the Bible as your church wants to preach it, LEAVE YOUR CHURCH!?!? How do you even manage to wrap your weird little Mormon head around an idea like that? Oh, Mormons. I get it. Leave your church and go to one that doesn't give a crap about social justice, like the Mormons! It's just a marketing ploy for the Mormon Church?

God damn it, Glenn! Now you've got me thinking like a conspiracy nut.
Anyway, attacking churches is probably not going to get you back into the good graces of the lunatic fringe of the far right, but I admire your chutzpah! I believe in football, that sort of play is known as a "Hail Mary." There's a pun in there somewhere, but I can't quite seem to grab hold of it.
Posted by Professor Chaos at 8:09 PM No comments:

Can't We Just Put Alan Grayson in Charge of Stuff?

Alan Grayson is my favorite member of Congress.

Posted by Professor Chaos at 6:04 PM No comments:

Limbaugh sinks to a New Low

So someone called in to the Oxycontin Follies show yesterday asking about Eric Massa's replacement in Congress.

Since Massa resigned mid-term (also known as "pulling a Palin") his replacement will be appointed by sorta black governor David "I fucked everybody" Patterson.

Here's what the bloated sack of contemptuousness had to say on the subject:

"Let's assume you're right," Limbaugh responded. "So, David Paterson will become the massa...who gets to appoint whoever gets to take Massa's place. So, for the first time in his life, Paterson's gonna be a massa. Interesting, interesting."

A "massa" Joke? Seriously, a joke about slavery?
This:

is funny to you?


It will be interesting to see how the dittoheads twist this into their "Rush is not a racist" narrative.

To avoid any confusion, let me state for the record. Rush Limbaugh is a RACIST.
And an idiot.
And impotent (The Smoking Gun)


Oh, and I stumbled on to this a minute ago. Not germane to the subject at hand, but pretty much sums up the axis of arrogance and ignorance that is Limbaugh:

Posted by Professor Chaos at 5:19 PM No comments: