Good news, rape culture is over!


Recently, a fraternity on the Georgia Tech campus got itself into a bit of bother over the occasional rapes taking place in its house and the frat's explicit encouragement of such behavior.


A member of a Georgia Tech fraternity sexually assaulted two women using the playbook described in a "luring your rapebait" email, two lawsuits filed this week against Phi Kappa Tau claim.
The Alpha Rho chapter of PKT turned a blind eye to red flags that brothers were encouraging each other to sexually assault women, the suits allege, including the "rapebait" email, songs joking about sexual violence, and chapter meeting minutes declaring "rape is good." The two suits contain nearly identical allegations but each is filed on behalf of a different plaintiff.

The fraternity chapter has been disbanded, and apparently that has completely solved the problem of on-campus rape culture.  At least according to this guy:

Sarasota speaker: There is no campus 'culture of rape'

And who is this speaker with such expert knowledge of collegiate culture? Why, no less an authority than  Dennis Prager of course!

Because who would know better what goes on in today's universities than this guy?

To be fair, his wife may actually be an undergrad.

So here's what he had to say about rape culture on college campuses:


Well, I guess I might cite the fact that a large number of women get sexually assaulted on campus?

One in 5 women are sexually assaulted on campuses. Do you know what sexual assault means? Did you ever look at what counts? An unwanted kiss is considered sexual assault.


Well, yes. I'm not sure why it wouldn't  be. Well, I guess I'll let the expert explain why not.

An unwanted kiss is considered sexual assault. I’m stunned it's only 1 in 5. Four out of five women have not gotten an unwanted kiss? My wife gets unwanted kisses every so often.
(laughter)

Oh, now I get it! If I kiss my wife at a time when she doesn't feel like smooching, maybe she's annoyed with me or feeling unattracted to me because I look like a potato in a Bobby Cremins wig,

Anyway, that's obviously the same thing as a stranger trying to shove his tongue down a woman's throat like he's Fitzgerald Grant and she's Olivia Pope.  That wouldn't be horrifying at all!

They make light of rape because they redefine these terms. We don’t make light of it. We think it is the worst thing possible short of murder. But they make light of it by trivializing it. Culture of Rape? No. I’ll tell you why it exists on the campus, and that is: a rape of the culture.”

So there you have it. Problem solved! feel free to send your daughters off to college secure in the knowledge that rape culture doesn't exist, it was all just a problem with mis-defining the terms. What a relief!

There is really a special place in hell for people like Prager. I don't understand why these people always feel the need to stand up for the assholes. Or maybe it's just that they feel some need to stand up for the powerful against the less powerful. Whether it's taking selfies in line at Chic-Fil-A or "standing with" the Duck Dynasty creep, these people will always rush to the defense of those who neither need or deserve defending. So of course these scumbags are going to side with fratboy rapists over their victims. It's some kind of sick pathology with people like this. 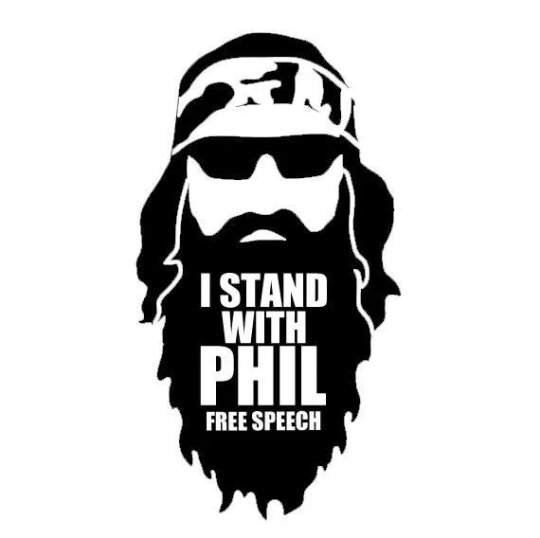 Okay, Phil is a millionaire with his own television show who is regularly given a platform to air his twisted views by various magazines and radio shows. He doesn't need you to stand with him.

Um, Israel has the strongest military in the region because of millions of dollars in US support. Support for Israel is the sine qua non of American foreign policy. Even criticizing Israel can make you a pariah amongst the conventional-wisdom-mainstream pundit class, just ask Jimmy Carter. Israel doesn't need some teenybopper in a T-shirt to stand with it.

Chic-fil-A is an extremely successful company with over 1,800 locations. They are hugely profitable, thanks to using almost no actual chicken in their chicken sandwiches. They are not some poor little mom-and-pop restaurant being bullied by the all-powerful gay lobby or whatever you think they are being bullied by. They don't need your help.
But any time the powerful are in any way challenged by the less powerful, right-wing scumbags will rise to their defense and call it courage. Pathetic!