Good job, American electorate! These are the guys you put in charge! 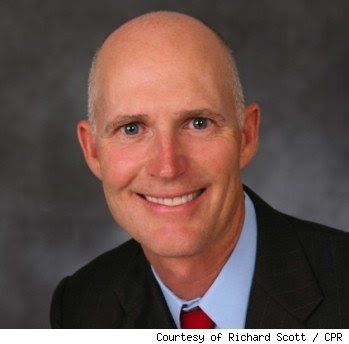 For one thing, look at the guy! Who votes for something that looks like this?

I know, it shouldn't matter what he looks like, but come on! there's got to be some limit.

But anyway, Governor Rick Scott has introduced a plan to subject both welfare recipients and all state employees to mandatory drug testing because, you know,

So what would make this libertarian, small-government teabagger decide to drug test everyone? Hmm, I don't know. Unless it's because he owns a chain of clinics that do drug tests?

One of the more popular services at Solantic, the urgent care chain co-founded by Florida Gov. Rick Scott, is drug testing, according to Solantic CEO Karen Bowling.
Given Solantic’s role in that marketplace, critics are again asking whether Scott’s policy initiatives -- this time, requiring drug testing of state employees and welfare recipients -- are designed to benefit Scott’s bottom line.

Hmmm. . .  nothing suspicious there!

In his defense, Scott has divested himself of his Solantic holdings. He gave them to his wife. Seriously.

The Palm Beach Post reported in an exclusive story two weeks ago that while Scott divested his interest in Solantic in January, the controlling shares went to a trust in his wife’s name.

What? No Good?
And this isn't the first time Scott has proposed a Solantic-friendly state policy:

. . . This raised a groundswell of concern and questions about his health policy initiatives, especially his push to move Medicaid into private HMOs. Solantic does not take Medicaid but does business with private Medicaid HMOs.

It really shouldn't be surprising. When you elect someone to run the government whose core belief is that government is bad, it's not all that shocking that they would see no problem with using their position of power to swindle the government. After all, they've been very clear about their complete lack of respect for government, why would you not expect them to see a government position as a giant grifting opportunity?

So, good job, Florida teabaggers. You asked for it, now you got it. Enjoy.
Posted by Professor Chaos at 5:39 PM No comments:

How Many Ways Can You Be Wrong in an 18-second Clip?

1: "most studies show"
If you're going to make a claim backed up by "studies" you really have to cite at least one. Otherwise, I gotta think you might just be making this up. I could claim that most studies show that I am awesome. Wouldn't you ask "what studies?" And then I would answer: "a survey of my five-year old niece, and 100% of the respondents agreed that I am awesome." Now who looks foolish?

2: It doesn't take "supernatural powers" to survive. Ordinary, not super-powered people survive things all the time. Do you think that Chilean coal miners have super powers? I survived a very treacherous fall down the side of a mountain. Do you think I have. . .well, that's a bad example. Obviously, I do have the kind of powers that you can't imagine. The kind of powers of which most men dare not dream.

3: Believing that you do have supernatural powers is probably going to be detrimental to your survival. If you're trapped in a collapsed coal mine and you convince yourself that you can use your super-human strength to tunnel out instead of waiting for the rescuers, you're probably not going to make it.

4: Even if by "supernatural powers" she's referring to the great feats of strength sometimes accomplished by people who get a surge of adrenaline in perilous situations, you don't have to be religious to believe in that. Atheists know about adrenaline.

5. That hairstyle. That is all kinds of wrong.
Posted by Professor Chaos at 5:11 PM No comments: