Neil Boortz Is a Bag of Scum 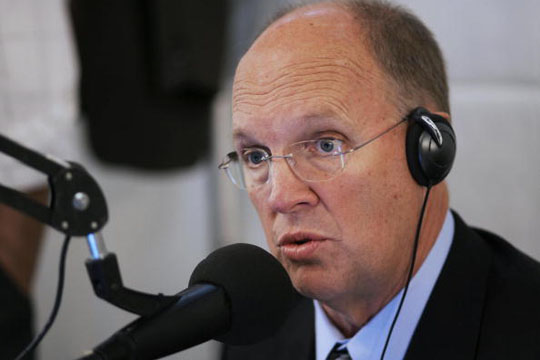 Neil Boortz has always been an asshole. He's the main rpromoter of the "Fair Tax" scam, for instance. But this is just beyond the pale.

"And you do in fact need to carry that gun and we need to see some dead thugs littering the landscape in Atlanta."

He's encouraging his listeners to go Chuck Bronson on any "thugs" they see around Atlanta.

Here's the context, via C&L:

BOORTZ: You know what? I, for one, am tired of putting up with this crap. And you want to know why I moved out of Atlanta and only spend a couple of weeks a year in this town? That's one of the reasons. Carjackings, violence, people getting shot. It's ridiculous. This city harbors an urban culture of violence. And I want you to look around. You drive into the city. The railroad overpass is on the downtown connector covered with graffiti. And that-- That is just an advertisement for everybody coming into this town that we really don't give a damn about those who would screw up our quality of life around here. We really just don't care. We don't care enough to paint over graffiti on the overpasses that come into our city, advertising welcome to Atlanta, here's some of our finest graffiti, from some of our finest urban thugs and their little gang signs. And pick up the paper tomorrow morning. Read about all the carjackings. Read about the innocent people shot for the pure de-hell of it.

This town is starting to look like a garbage heap. And we got too damn many urban thugs, yo, ruining the quality of life for everybody. And I'll tell you what it's gonna take. You people, you are - you need to have a gun. You need to have training. You need to know how to use that gun. You need to get a permit to carry that gun. And you do in fact need to carry that gun and we need to see some dead thugs littering the landscape in Atlanta. We need to see the next guy that tries to carjack you shot dead right where he stands. We need more dead thugs in this city. And let their -- let their mommas -- let their mommas say, "He was a good boy. He just fell in with the good crowd." And then lock her ass up.


Now, I've lived in Atlanta for almost 6 years, and I have yet to be robbed, mugged, carjacked or murdered. But that may be because my muscular physique is so intimidating to the criminals. Maybe it's different for other residents.
Or maybe not. Because C&L links to this chart from the FBI:

Which would seem to indicate that violent crime is on the decline in the ATL. Not that a rise in crime would justify the sort of vigilante shooting spree Boortz is calling for. And in case anyone is unsure of who the targets are, Boortz even drops this lovely hint.


And we got too damn many urban thugs, yo,
"Urban Thugs, YO"

Urban thugs wasn't enough? You had to add "Yo?"

The next time some ass guns down a random black guy in Atlanta, that blood will be on Neil Boortz' hands.
Posted by Professor Chaos at 10:30 PM No comments:

I'm Not Proud of This

But I came up with an Anthony Weiner joke.

I hear Anthony Weiner is probably going to quit soon. I hope he decides to stick it out a little longer.