This thing is a Senator?

Look at this thing.

This is not a senator. This is a cartoon character. And this was the most flattering picture I could find.

And I know, you're not supposed to judge a book by its cover, but in the case of Senator Bill Cassidy, looks are NOT deceiving. Because when he speaks, he reveals himself to be the exact person that his heavy-browed, cloudy-eyed cro-magnon appearance would suggest he is.

Republican senator takes being a Trump apologist to new heights

Really?
The fact that the President of these United States doesn't know shit about what he's doing is aky, because this ignorant lunkhead thinks FDR didn't understand money?

This dunce actually has the nerve to go on television and say that it's perfectly fine for the most powerful person in the US to have no clue what he's doing because FDR and Eisenhower delegated? Because FDR didn't personally write the law that took us off the gold standard, this dim-witted dunderhead thinks he didn't read it and understand it before signing it into law? The mind boggles!

“FDR, as best as I can tell, had no kind of involvement at all in our conversion to the paper currency. You know, we’re going away from the gold standard and we’re now gonna do the do the ‘full faith and credit’ of the Federal Reserve behind a paper bill. As best I can tell, it was brought to him fait accompli and he signed off. That’s a pretty significant change in our economic history, which as best as I understand was not anything he was intimately involved with. It was some fellow playing the guitar at home and the thought occurred to him. And I don’t mean to minimize it. That’s just the way the guy unwound. I think different presidents have different ways of governing. We just have to respect that.”


I can't count the number of times this dullard says "as best I understand" or "best as I can tell" in this interview.  He is "reading" a biography of FDR and as best as he understands it, FDR just signed something his guitarist thought up on a whim. So, in other word, you didn't understand whatever it is you think you read about FDR.

Then Mika asks him about the President's constant. compulsive lying. I mean, she doesn't phrase it that way, but that's what she's asking about. And this blockheaded dullard comes up with "well, the President speaks in hyperbole. . ."

That's not what we're talking about!

Hyperbole? Hyperbole is saying "this hotel is the best, most classiest most fantastic hotel in the world." We know he uses that kind of hyperbole. We're talking about lying.

Lying. Saying something that you know good and goddamm well not to be true.

Lying like saying you have investigators in Hawaii finding out some sort of unbelievable information about Barack Obama's birth certificate.

Lying like saying there is some sort of evidence that millions of people voted illegally for Hillary Clinton.

Lying like saying you'd received a letter from the NFL asking you to re-schedule a presidential debate.

Lying like claiming that Mika Brzezinski was walking around your resort visibly bleeding from her face after plastic surgery.

Lying like making your spokesman go before the National press and claim that your sparsely-attended inauguration was actually the largest crowd in history.


These are blatant, easily-debunked LIES. These are not "hyperbole." These are not "exaggerations."  These are lies. And not even good ones. These are lies like my little brother coming down the stairs Easter morning with chocolate smeared all over his face and caliming "no, I didn't eat any candy before breakfast." Except my brother was like six and he grew up to be an adult who presumably can tell a convincing lie. 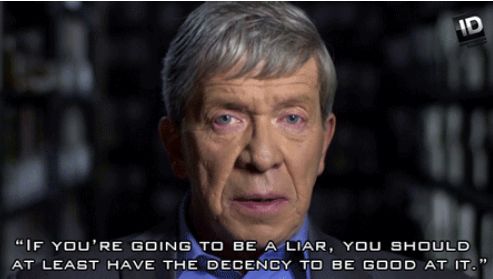 Oh, you don't "focus on that?" Oh well sure, why would you? Why would you waste your time wondering whether the President of the United God Damn States of America is capable of telling the truth? Why would you worry at all about whether the leader of the free world is capable of distinguishing between truth and falsehood? Why focus on whether the man with his finger on the nuclear button is a compulsive liar, or a sociopath who lies for his own twisted mysterious reasons?
Why would you stress about that little detail? I mean, it's not like you're in some position of responsibility or anything, Senator. Oh, wait.