Terrifying Headline of the Day 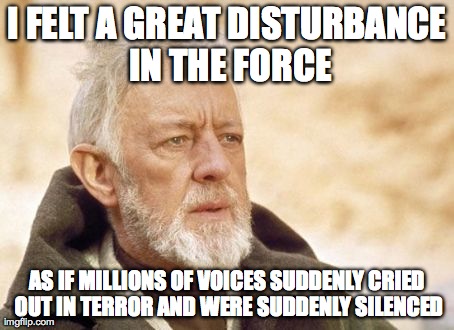 There is no way in Hell that this can possibly be a good thing. Or even a neutral thing. Or benign. There is no way on God's green Earth that Mike Pompeo is looking to increase the number of unalienable rights. Unless yopu are a Christian small-business owner who wants the right to deny service to any people whose existence you find troubling. That might possibly be a new right that this commission discovers. Other than that, though, there is no way that this panel wasn't convened to try to find ways to make current rights a bit less unalienable.

Mike Pompeo is a far-right theocratic lunatic. We all know this. Even the fairly conservative Economist had this to say about him:


Several things have earned Mr Pompeo the reputation of being a kind of latter-day Crusader. One is a video clip in which he argues vigorously that at least some individuals are motivated by their Muslim beliefs, and by things they read in the Koran, to commit terrible violence. . . What is more striking is the remedy of Christian solidarity he proposes: Islam-inspired terrorists “will continue to press against us until we make sure…we know that Jesus Christ is the only solution for our world.”


Then there was this, via The Intercept:


At an evangelical church in his district that specializes in addressing “Satanism and paranormal activity” — and standing in front of a Christian flag — Pompeo in 2015  spoke of the “struggle against radical Islam, the kind of struggle this country has not faced since its great wars.” He warned that “evil is all around us,” citing reports of terror plots, and cautioned the congregation not to be deterred by those who might call them “Islamophobes or bigots.”

The Kansas lawmaker is best known in the national media for his zealous investigations of Hillary Clinton’s response to the 2012 attack on the U.S. government facility in Benghazi . . . He has pushed for broad National Security Agency powers and supports interrogation techniques broadly viewed as torture.

So, yeah, that's the guy you want to put in charge of determining which human rights are "inalienable." The guy who's fine with torture.

Oh, and he's real strong on religious freedom. He totally believes that people should be free to practice their faith as they see fit. Except for Muslims, of course!


Earlier this year, the congressman shocked the Islamic Society of Wichita, a local mosque in his district, by publishing a statement denouncing the group for inviting a speaker he alleged had ties to Hamas. The speaker had spoken four times to the mosque in the past without incident.

But Pompeo, in his statement, released without prior notice to the mosque, charged that the Islamic Society of Wichita’s event was an insult because it coincided with the Christian holiday of Good Friday, and that if the mosque failed to rescind the invitation, they would be “responsible for the damage among religious faiths that is sure to follow.”


Pompeo appeared on Secure Freedom Radio, a program hosted by anti-Muslim campaigner Frank Gaffney, to boast that he had used Gaffney’s organization as a resource to research the speaker. Gaffney is notorious for spreading fears about Muslims, claiming absurdly that President Obama is “still” a Muslim, that Gov. Chris Christie had committed “treason” for appointing a Muslim judge. He runs a website that claims that Islam is not a religion, but a political ideology bent on destroying Western civilization.

So, yeah. A guy who supports Frank Fucking Gaffney, a guy who believes that Muslims should not be allowed to hold any governmental positions, that to appoint a MUslim to the bench is actually "treason," That's the guy who's going to decide who has what rights.

Here are a few excerpts from an interview she gave to Crux, a website dedicated to "taking the Catholic Pulse."

ROME - Former U.S. Ambassador to the Holy See Mary Ann Glendon believes the entire human rights movement has fallen victim to a new form of skepticism that risks bringing it to collapse, with religious freedom being in the most precarious position.

Glendon said her biggest concern is for religious freedom, which she said risks “becoming a second-class right that is regularly, or too often, subordinated to a whole range of other rights, claims and interests,” particularly in the United States.


Oh, good. Someone who thinks that rights are a zero-sum game is heading up the human rights panel.

While it might seem surprising, Glendon said there are a number of prominent legal academics arguing to toss out religious freedom laws on grounds that, with freedom of speech and expression and assembly, a law specifically guaranteeing religious liberty is “a relic of a superstitious [age],” and is no longer necessary.


No there aren't. No "prominent legal academics" are arguing that we should get rid of religious freedom. If there were, she would be able to name at least one. How many does she name?

So what are Pompeo and Glendon saying about their approach to the whole "rights" thing?"


In remarks at the State Department on Monday, Pompeo noted that “words like ‘rights’ can be used by good or evil,” decrying how some have “hijacked” human rights rhetoric to be used for “dubious or malignant purposes.”

Holy shit! Just leading right off with the whole "too many rights are bad" theory!

Glendon, in brief comments, echoed that, telling reporters that "basic human rights are misunderstood by many, manipulated by many, and ignored by the world’s worst human rights violators."

Oh, and here's a couple more things she said to Crux:


Another major concern for Glendon is in developing nations, where “Western-funded human rights organizations are coming in and claiming universal human rights status for their agenda, treating people in those countries as if they are ignorant and they better get with the human rights program.”


“It smacks of neocolonialism, and makes people very angry,” she said, adding that at the moment, “very little is known about the financing of the scores of NGOs that are promoting one right or another.”

Neo-colonialism. Yeah, 'cuz did you ever think that maybe some countries don't want to have rights for people? Hmm? Ever think about that? If some other countries want to kill people with different political or religious views, what right do we have to tell them otherwise? Unless the people being persecuted are Christians, then obviously you have a moral obligation to intervene.

When it comes to church-state relations, particularly the current push for abortion and euthanasia to be declared human rights, Glendon said the debate needs to happen but outside of a courtroom.
“If the issues are decided in the courts, you’re going to get an all-or-nothing decision where it makes the losers very angry and disappointed,” she said.


And she would know, as her people have been on the losing side of these court decisions for a while now. If they had been winning these court cases, I'm sure she would be equally concerned with the feelings of the losers.

Also, yeah, I can see where all-or-nothing decisions about rights might be problematic. I mean, what if the courst just decided that, hey, LGBT people should have all the exact same rights and priveleges ans any other human being? Isn't it better to slowly add in a couple rights at a time? Maybe they can serve in the military, if they don't let anyone know who they are. Then, maybe they can serve openly. Then, maybe they can get married now. Then maybe some day down the road, we make it so that there aren't a couple dozen states where a person can be fired for being gay. You have to approach these things slowly, or otherwise, the bigots will be "very angry and disappointed." And we can't have that. Their feelings need to be considered at least as much as other people's rights.

“If we want to save our democratic experiment, it’s gotta take place in the realm of bargaining, education, persuasion, convincing your fellow citizens of the justice of your cause, and then you vote.”


Yes, if you think you should have human rights, you don't go to court! You have to convince everyone that you deserve to have rights. Then we vote on whether you get to have rights or not. It's called Democracy, people!

Anyway, these people are going to decide what rights we have and who gets to have them. We are well and truly fucked.