When I first saw this headline:

Your request is being processed...

"V" - The Right's New Favorite TV Show, Or Inadvertent Proof of The Ubiquity of The Right's Fables?

I thought, "Geez David Sirota, you're getting awfully worked up over a silly sci-fi TV show."

And when I read : Am I crazy or does this preview make the show seem like a not-so-subtle fringe-right-wing criticism of Obama and Obama followers?

I thought "Geez, David Sirota, you're starting to sound as bad as those nuts over at Newsbusters."

Then I watched the preview:

And I thought, "Geez, David Sirota, I owe you an apology. You were right on about this one."

In questioning Obama's citizenship and heritage, conservatives have always portrayed Obama as an alien visitor. They've also constantly implied that behind Obama's friendly veneer are sinister motives - and they seem to believe that while most of the public are gullible fools believing in Obama as a savior, they and their tea-party protestors see the "real truth" of those motives.

"V" premiers tonight on ABC, check it out and see if David Sirota wasn't right.
Posted by Professor Chaos at 6:48 PM 1 comment:

I Don't See How This Can Not Be A Good Thing.

In what could be a nightmare scenario for Republican Party officials, conservative activists are gearing up to challenge leading GOP candidates in more than a dozen key House and Senate races in 2010. Conservatives and tea party activists had already set their sights on some of the GOP’s top Senate recruits. . . But their success in Tuesday’s upstate New York special election, where grass-roots efforts pushed GOP nominee Dede Scozzafava to drop out of the race and helped Conservative Party nominee Doug Hoffman surge into the lead on the eve of Election Day, has generated more money and enthusiasm than organizers ever imagined.

God, I hope Hoffman wins. Not because I like Doug Hoffman. I don't know anything about Doug Hoffman, but if he's got the support of the tea-baggers, I assume he's a nut or a neanderthal. *

No, I hope he wins so that the super-right-wing nutsos might be emboldened to abandon the Republican Party and form their own gun-nut/anti-science/pro-war/pro-Israel (but anti-Jew) party.

I don't see any bad scenario arising from that. At the least, the right gets splintered into two weaker parties.

At best, the split on the right enables progressive Democrats to split off from the DLC "New Democrats." Maybe the next time a seriously progressive candidate like Ralph nader (But not Ralph Nader) the conventional wisdom won't be that you can't vote for him because you'll be handing the election to the Republicans.

Ideally, I would love to see at least a couple different parties on the left, a couple on the right, and a couple in the middle. Wouldn't it be nice to have actual choices in the election booth? Instead of having to "hold your nose and vote for Kerry because at least he isn't Bush." I would love to have to decide between, say, a Green Party candidate, a Labor Party candidate, and a progressive Democrat without worrying about giving an automatic victory to the Right because they're trying to decide whether to vote for the Old Testament Party, the Ghost of Reagan Party and the Shoot 'em All Party.

“I would say it’s the tip of the spear,” said Dick Armey, the former GOP House majority leader who now serves as chairman of FreedomWorks, an organization that has been closely aligned with the tea party movement. “We are the biggest source of energy in American politics today.”
God, that's a depressing thought. especially since he's probably right. The kooks seem to have an inexhaustible energy and certainly no shortage of funding.

“What you’re going to see,” said Armey, “is moderates and conservatives across the country in primaries.” Party strategists worry that well-funded, well-organized challenges from the right could force Republicans to exhaust precious resources on messy primary fights — or force moderate candidates to adopt more strident positions early on that could haunt them during the final months of the campaign.
So how could that be a bad thing?

The next race on which to keep an eye is the Republican Senatorial Primary in Florida. Tea-bagger favorite Marco Rubio is mounting a challenge to the presumptive nominee, Charlie Crist.

Rubio has won nearly a dozen county GOP straw polls across the state and is rapidly becoming a darling of the tea party movement. Everett Wilkinson, an organizer for the Florida Tea Party Patriots, said his group plans to take part in get-out-the-vote activities and other efforts to deny Crist the GOP nomination, despite the fact that Crist leads both Rubio and Rep. Kendrick Meek, the likely Democratic nominee, by a comfortable margin.

*Oh, yeah. Here he is being endorsed by Frankenberry: 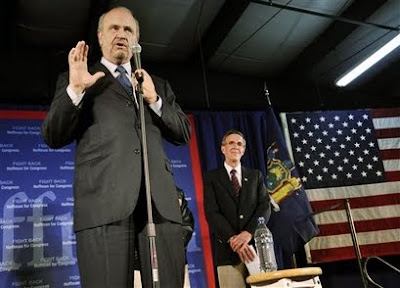