ATLANTA —
While Sunday's thrilling NFL Playoff game was going on inside the Georgia Dome, outside Federal Agents were busy conducting an undercover sting.
Immigration and Customs Enforcement Agents, (ICE) tell Channel 2 Action News they were searching for illegal NFL products being sold by vendors.


Okay, that seems pretty straightforward. But a couple paragraphs in , it gets weird.

At a later date, Homeland Security Investigators are expected to bring the sellers who were detained during Sunday's Falcons-Seahawks game, in for questioning.


Homeland Security. The Department of Homeland Security, which is tasked with, as I understand it, securing the homeland from terrorists, is being used to enforce copyright laws?  Nice priorities, Homeland Security! There are still Al-Queda creeps out there, the right-wing militia movement is gearing up for another 1776, and your big concern is that the Falcons might not be getting their cut of the T-shirt sales? I know I feel safer!

Note: GOPPY is not an actual elephant. He represents the personification of the problem-solving skills of today's G.O.P.


Question #1:
Dear GOPPY, the Bush tax cuts created huge deficits. What should be done to correct this?


Question #2:
Dear GOPPY, de-regulating the banks led them to take huge risks with other peoples' money, crashing the economy and leading to a taxpayer-funded bailout. How can we ensure that this doesn't happen again?


Question #3:
Dear GOPPY,  A bunch of kids got killed with guns.
What would you recommend to prevent this from recurring?

That's an easy one! More guns!


Question #4:
Dear GOPPY, My marriage is in trouble because my husband can't forgive me for having an affair.
What can I do to regain his trust? 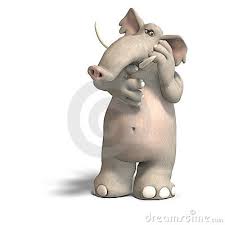 I know! You should fuck a bunch of different dudes!


Question #5:
Dear GOPPY, I think I may be an alcoholic. I want to stop, but I'm afraid I can't. What should I do?

Goppy the GOP elephant! Doubling down on bad ideas since at least 1980.
Posted by Professor Chaos at 2:28 PM 2 comments: