Why I Steer Clear of Missouri 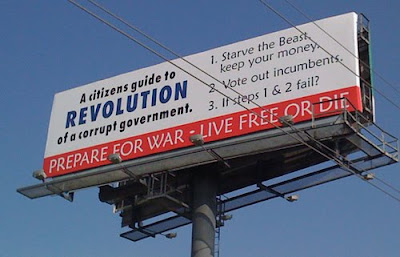 The Lafayette County Republican Central Committee is proudly celebrating a new crazy billboard on I-70 near Grain Valley. It calls for citizens to "starve the beast" and "vote out incumbents" -- and if that doesn't work, "PREPARE FOR WAR." (source)
Apparently, in Missouri it is perfectly acceptable to openly advocate armed insurrection against the government of the United States of America.

And using appalling grammar like "revolution of a corrupt government" is, I guess, one way to show your contempt for those Washington insiders and their grasp of the English language.

And yes, the Lafayette county Republicans are actually bragging about this billboard on their website. Check it out.

New billboard on I-70 replaces the nationally-and-highly publicized "Obamanation" billboard that quickly rose, in recent weeks, to statewide and national fame. (Sign is located east bound on the north side just before the Grain Valley exit).

And their assault on the English language continues unabated on this website of theirs.

Oh, and here is their previous billboard of which they seem to be so proud: 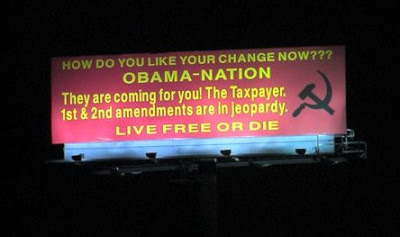 At least that one was just bug-eyed, poo-throwing crazy. It doesn't actually recommend an armed revolution (but only if option 1, tax evasion, doesn't work!)

So that's why we here in the Chaos compound tend to give Missouri a pretty wide berth. Because being in between Florida and Alabama is bad enough.
Posted by Professor Chaos at 4:53 PM 2 comments: