And of course, it's Bryan Fischer leading the way!

He starts out this entry in the looney-toons batshittery championships sounding relatively sane. In football, this is known as a "juke." Gets you thinkin' he's goin' one way, then bam! he's gone the other!

The Medal of Honor will be awarded this afternoon to Army Staff Sgt. Salvatore Giunta for his heroism in Afghanistan, and deservedly so. He took a bullet in his protective vest as he pulled one soldier to safety, and then rescued the sergeant who was walking point and had been taken captive by two Taliban, whom Sgt. Giunta shot to free his comrade-in-arms.

Okay, sounds like a straight news story about a soldier acting heroically. But with the AFA, no news story is ever really "straight." Everything is secretly, villainously gay. The gays, they're everywhere! Help!

Oh, here's the headline we skipped over:

The Feminization of the Medal of Honor
Yeah. He's serious.

But I have noticed a disturbing trend in the awarding of these medals, which few others seem to have recognized.

(here's a good rule of thumb, Bryan. If you're the only one who recognizes a trend, that trend probably doesn't exist. Your track record is really not good in this area.)


We have feminized the Medal of Honor.

How can you be heroic if you're not killing anyone? Just saving someone else's life, that's not masculine. Girls do that! I mean seriously, look at these namby-pamby Mr. Fancypants girly-men: 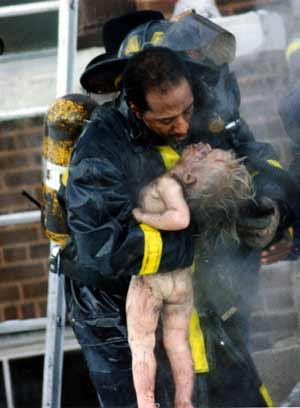 I mean, what is this, a Village People reunion?

When we think of heroism in battle, we used the think of our boys storming the beaches of Normandy under withering fire, climbing the cliffs of Pointe do Hoc while enemy soldiers fired straight down on them, and tossing grenades into pill boxes to take out gun emplacements.

That kind of heroism has apparently become passe when it comes to awarding the Medal of Honor. We now award it only for preventing casualties, not for inflicting them.

Goddammit, I want to see some fuckin' carnage! 'Cuz that's what Jeezus would want.
By the way, if you read the first paragraph of your own article, Bryan, you'd see that Sgt. Giunta " rescued the sergeant who was walking point and had been taken captive by two Taliban, whom Sgt. Giunta shot to free his comrade-in-arms."
So shooting two enemy guys is not enough for ya? And according to the President's speech, "He leapt forward. He took aim. He killed one of the insurgents and wounded the other, who ran off."
Is that really not enough to satisfy your blood-lust?

So the question is this: when are we going to start awarding the Medal of Honor once again for soldiers who kill people and break things so our families can sleep safely at night?

I got nothin'! I just don't know how to respond to such an insane and awful question.

I would suggest our culture has become so feminized that we have become squeamish at the thought of the valor that is expressed in killing enemy soldiers through acts of bravery. We know instinctively that we should honor courage, but shy away from honoring courage if it results in the taking of life rather than in just the saving of life. So we find it safe to honor those who throw themselves on a grenade to save their buddies.

Oh, my God, I wish that was true! I think the world would be a better place if we really were squeamish about honoring violence and eager to honor those who save lives (or as you say, Just the saving of life.)

Jesus, in words often cited in ceremonies such as the one which will take place this afternoon, said, “Greater love has no one than this, that someone lays down his life for his friends” (John 15:13). So it is entirely right that we honor this kind of bravery and self-sacrifice, which is surely an imitation of the Lord of Lord and King of Kings.

Okay, stop. Just stop right there. That actually was pretty sane and you didn't sound like a total asshole. Just end on that note and. . . Oooooohhh.  . . you're gonna say more things, aren't you?

“Greater love has no one than this, that someone lays down his life for his friends” (John 15:13). So it is entirely right that we honor this kind of bravery and self-sacrifice, which is surely an imitation of the Lord of Lord and King of Kings.

However, Jesus’ act of self-sacrifice would ultimately have been meaningless - yes, meaningless - if he had not inflicted a mortal wound on the enemy while giving up his own life.

Oh, yeah. That was my favorite part, when Jesus is all "yo, St. Peter, throw me that sword!" And then he kills Pontious Pilate and he says "do unto others, Bitch!"
Okay, Okay, I know that by "the enemy" you mean the Devil, or "sin" or whatever, and by "Mortal wound" you mean, um, I'm not really sure. Because you're not saying that the Devil is dead, are you?

So, let me see if I got this straight. You're equating a symbolic victory in which the victor is the only one who dies with an actual real-life victory in which the victor kills the other guy?  And then the authorities get disarmed? I don't get it.
The cross represented a cosmic showdown between the forces of light and the forces of darkness, and our commanding general claimed the ultimate prize by defeating our unseen enemy and liberating an entire planet from his bondage.

We rightly honor those who give up their lives to save their comrades. It’s about time we started also honoring those who kill bad guys.
Seriously, Bryan, Jesus never killed anyone. I spent a lot of hours in Sunday School and Bible classes, and not once did Jesus ever kill anyone. He raised a couple of people from the dead, maybe that's what you're thinking of? He yelled at a few jerks, and knocked over some tables once, but he never killed anybody. I don't think Jesus was a big fan of killing. I'm pretty sure it's one of the things he said that we shalt not do. But I guess in your twisted, stupid, hateful little world, it's better to be a stone-cold killer than to be a bit, you know, "femmie?" A little "light in the loafers?" Better that you should live with the horror of having killed a fellow human being than that you take a chance on accidentally catching the gay. Because in your horrible little world, there's nothing worse than that.