Yesterday, the new Speaker of the House, Paul Ryan, summed up his House Republican agenda – vowing to pursue legislation that would frame a stark choice for voters in 2016.
“Our No. 1 goal for the next year is to put together a complete alternative to the left’s agenda,” he said.

Okay, that's how you know you have no ideas. When your entire agenda is "whatever they're doing, let's do the opposite."
Well, I shouldn't say "no ideas." Because Ryan does have a few terrible ones.

Although, to be fair, they're pretty much the same bad ideas that Republicans have been promoting since at least the 1980's.

Because when your number one fake domestic concern is the deficit, the first thing you want to do is take in less revenue. Now, sure it's never worked, can't work and won't work, but that's no reason to stop doing it now!

You know, if Ronald Reagan couldn't make Reaganomics work, what the hell chance do you think you have?

3. Slash spending on domestic programs like food stamps and education for poor districts.

Well, the downside is that this would make life even worse for people who already have it tough. But on the other hand, it would do virtually nothing about the deficit.
Wait, what's the upside again?


4. Turn Medicaid and other federal programs for the poor into block grants for the states, and let the states decide how to allocate them.

5. Turn Medicare into vouchers that don’t keep up with increases in healthcare costs.

Because fuck old people and their "medicine" and "doctors."

Sure, we could raise the cap, but wouldn't be easier to just make people labor into their seventies? I mean, what, they think they should be able to retire with dignity? Ha! Should have been born rich. Like, say, Paul Ryan.


7. Finally, let the minimum wage continue to decline as inflation eats it away.

Nothing makes a country great like having tons of working people living in dire poverty! 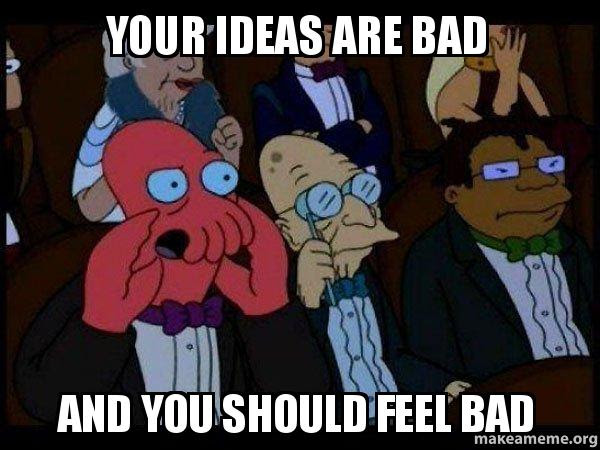