Conservative pundit Bill Kristol on Sunday urged people to judge NBA team owner Don Sterling by his “deeds,” and not to “go hysterical over two or three sentences” where he tells his girlfriend to stay away from black men.

Okay, fine. Fair enough, let's judge him by his deeds.

In November of 2009, Sterling settled the suit with the US Department of Justice for $2.73 million, the largest ever obtained by the government in a discrimination case involving apartment rentals. Reading the content of the suit makes you want to shower with steel wool. Sterling just said no to rent to non-Koreans in Koreatown and just said hell-no to African-Americans looking for property in plush Beverly Hills. Sterling, who has a Blagojevichian flair for the language, says he did not like to rent to “Hispanics” because “Hispanics smoke, drink and just hang around the building.” He also stated that “black tenants smell and attract vermin.” (source)

Trying to figure out the rules

Just trying to figure out what a right-wing asshole has to do to be abandoned by the FOX crowd.

If you are a deadbeat who encourages your followers to bring weapons of war to confront the United States government, they will #StandWith you. 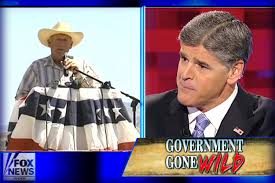 If you are a stunningly ignorant racist who thinks the blacks were better off before they got all these "rights," they will #StandWith you.

But apparently you can't be both.

Sean Hannity on Bundy ‘Negro’ Remarks: ‘Beyond Repugnant to Me’

Or is it maybe that you can wax nostalgic for Jim Crow and just be a good 'Merican, but longing for the days of slavery is just a bridge too far?


Then there's this:
Ross Douthat


The source of the potential trouble lies in a place where [Pope] Francis has arguably been most effective — in the distinction he’s drawn between the doctrinal and the pastoral, between how the church expounds its moral rules and how it approaches the human beings trying to live up to them


Francis could actually be considering a truly major shift on remarriage and communion, in which the annulment requirement is dispensed with and (perhaps) a temporary penance is substituted.

Such a shift wouldn’t just provoke conservative grumbling; it would threaten outright schism. The church has famous martyrs to the indissolubility of Christian marriage, and its teaching on divorce and adultery is grounded not just in tradition or natural law, but in the explicit words of Jesus of Nazareth.


This means that admitting to communion people the church considers to be in permanently adulterous relationships wouldn’t just look like a modest development in doctrine. It would look like a major about-face, a doctrinal self-contradiction.


So, Ross Douche-Hat, who inexplicably has his column published not in Catholicism Today, or the Right-Wing Christian Monthly, but by the New York Freakin' Times, is criticizing the Pope. Why is it suddenly okay to criticize the Pope? Generally, don't conservative Catholics like Douche-hat believe the Pope is infallible? Or is it like Presidents? When the President is one of your guys, then the office must be respected and we must rally behind our President in times of crisis, and the President's policies must never be criticized lest we embolden terrorists. But when the President is one of the other guys, then suddenly dissent becomes once again the highest form of patriotism and by dissent we mean things like questioning his parentage, casting aspersions on his religious beliefs and inviting a man who threatened his life to the goddamm state of the union.
Is that how it works for conservative Catholics, too? When you like the Pope, he is the infallible representative of God Himself, but when you don't like him, he's just some guy who doesn't understand about Jesus! Is that how it works? I'm really trying to figure out all these rules. It must be exhausting being a right-winger, having to keep up with all these rules. No wonder they're always in such shitty moods.

Posted by Professor Chaos at 6:08 PM No comments: