Random thoughts about he who must not be named.


Some deep thoughts, cheap shots and bon mots as Scott Ostler likes to say, about the Rump:

1: I don't know whether Trump has a piss fetish or not, but it would explain why he was so creeped out by Hillary taking a restroom break during the debate.
I mean, if Trump sees urination as a sexual act (and it's fine if he does, no kink-shaming here) it might make sense that he was bothered by the thought of a septuagenarian engaging in it.To him, it would be as if she was backstage using a vibrator. He might say something like "I know what she was doing back there. Don't say it, it's disgusting. Now if she was a
-year-old Russian hooker, then sure. That'd be hot. But an old lady doing it? Yuck!"

2: I think this is the narrative to push if we want nice things:
" Trump says he's going to provide health care for all, but I don't think he can pull it off. No way can he get that past Paul Ryan and Mitch McConnell. Those guys know what they're doing, they'll always be two steps ahead of him. I just don't think Trump is a skilled enough leader to get single-payer health care done."

Could work. Maybe. We definitely have nothing to lose at this point.

3: No one should ever interview Kellyanne again. Unless they begin with this one question: Can you explain to me the difference between "alternative facts" and lies? And then don't let up. Don't let her change the subject, don't let her spew nonsense, just keep asking "but how is that not a lie? Why would that not be lying? Isn't that just a lie?" etc. Do it for the full hour or until she storms off set. And then never have her on TV again. She has NOTHING of value to say. 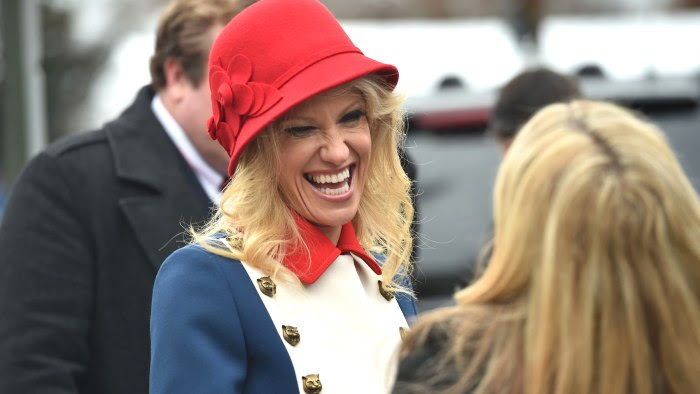 So, basically you guys put a preening, incompetent, unqualified narcissistic into the most powerful office in the world and it's our fault because we hurt your little feelings? Seriously?

All right, let's go over this from the top.
"It happened because you banned super-sized sodas."
Well, that's bullshit. Super-sized sodas were only banned in one city, New York, where none of you red-state rednecks were ever going to go anyway, by the Republican mayor Mike Bloomberg. And we all agreed that this was stupid. This was the one issue in the last decade that we could all, liberal and conservative, young and old, agree on - that banning large sodas was fucking stupid. But one Republican mayor did that and no one outside of the 5 buroughs was affected at all so what the fuck is your problem anyway?

"Because you branded people who oppose same-sex marriage as 'homophobic'"
Is there another term you'd prefer? If you think that gay marriage is somehow a threat to your hetero marriage, that is an irrational fear of the gay. In other words, that is homophobia. It's pretty much the dictionary definition of homophobia.
And if you don't think that gay marriage is a threat to hetero marriage and you still oppose it just on the basis of I don't know, because it makes you uncomfortable? then maybe homophobic isn't the right word for you. Maybe "giant asshole" would be a better term.


"Because you treated owning a gun and never having eaten quinoa as signifiers of fascism."
What? What in holy Hell are you even talking about? When has anyone ever called you a fascist for not eating some trendy food that, honestly, most of us have never tried. I know I haven't. And if you want to know what the "liberal elite" think about America's quinoa fascination, just Google "problem with quinoa." You'll see plenty of articles like

Can vegans stomach the unpalatable truth about quinoa?

Ethical consumers should be aware poor Bolivians can no longer afford their staple grain, due to western demand raising prices

What your organic market doesn’t want you to know: The dark truth about quinoa

As the gluten-free food grows in popularity, some are raising questions about the human costs of its production

So I don't know who you think is condemning you for not eating it. As for gun ownership and it's relation to fascism, you lost me there too. Many of us don't like guns. Most of us are okay with law-abiding citizens owning normal pistols or rifles for home protection and/or sport. What we object to is people toting around military-style assault weapons or automatic pistols with extended magazines that can kill large numbers of people in a very short time and don't really serve any other purpose. And we object to loopholes in the law that allow criminals and the mentally ill to bypass background checks and get their hands on firearms. And when we raise these objections, it is YOU guys who generally accuse US of being fascists and trot out easily debunked canards about Hitler and gun control.

"Because you turned 'white man' from a description into an insult."

That just never happened. You need to turn off FOX. They are lying to you. 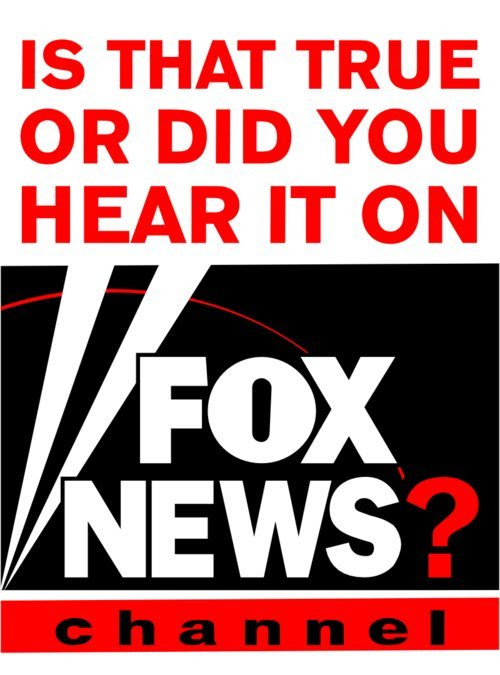 Okay, do you even know what a slur is? A simple descriptive term is not a slur. People who deny the obvious reality of the changing climate are deniers. Just as on a baseball team, one who pitches is a pitcher and one who hits is a hitter, so one who denies is a denier. That's just the definition of the word. And describing deniers as dangerous is not a slur either, since your denial contributes to our lack of action to prevent climate change, your willful ignorance is in fact a danger to us all. And I'm not sure what you mean by "eco-pieties," but if you mean that I'd rather not see Miami completely underwater or hurricanes in Atlanta, then yes, I am possessed of "eco-piety." I'd be a dman fool not to be.


"Because you treated dissent as hate speech and criticism of Obama as extremism."

No, that's what FOX told you we did. What we actually treated as hate speech was shit like this: 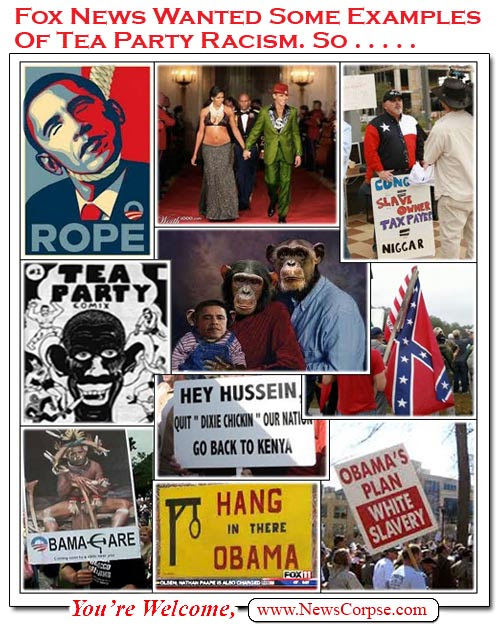 And what we called extremism was the constant threats of sedition, secession and political violence. 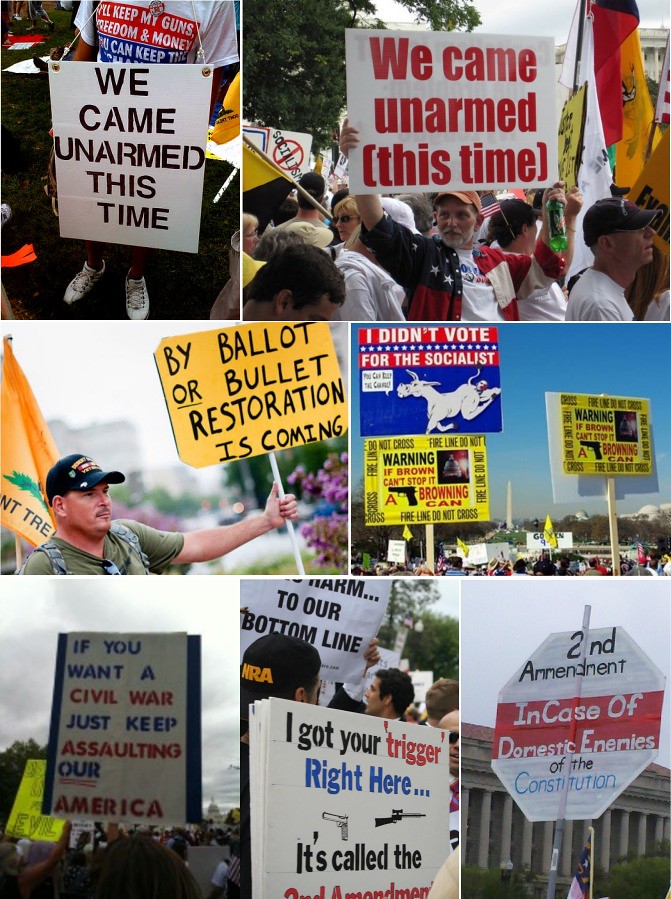 "Because you talked more about gender-neutral toilets than about home repossessions."


No, that's what Limbaugh told you we did. What actually happened was this: Did you think these people were demonstrating about restroom policy?
And when Obama did say that maybe there ought to be some way of helping out the people who were losing their homes, you guys started dressing up as Paul Revere and demanding your country back.


"Because you beatified Caitlyn Jenner."

No, that's what Bill O'Reilly told you we did. What we actually did was say "oh, Bruce is transitioning into a woman? Well, that's courageous of him to do it in public. Oh, wait, he's a publicity whore from a family of publicity whores and she's using her transition to get her own TV show. Oh, well, what else is on?"

"Because you policed people's language, rubbished their parenting skills, took the piss out of their beliefs."

Rubbished? Took the piss? Oh fuck me, you're not even American. Why don't you devote your energy to blaming liberals for the Brexit?

"Because you said criticizing Islam is Islamophobia."

No, that's what Sean Hannity told you we did. What we actually said was Islamophobia was this: 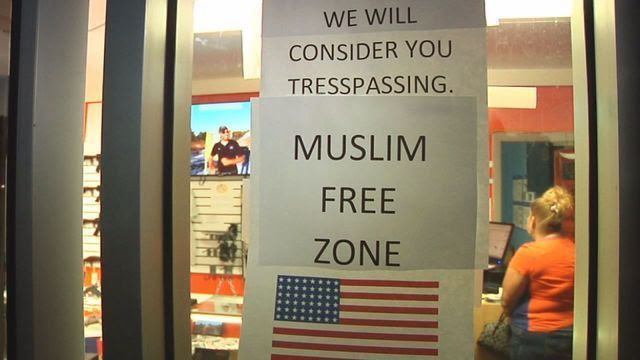 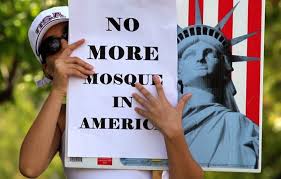 Anyway, it goes on for a bit, but if I'm understanding you correctly, you elected a racist because you were offended about being called racist. You elected an Islamophobe because you were bothered by being called Islamophobic. And you elected a monstrously unqualified, emotionally unstable sex offender because we hurt your little feelings? Fuck you. Fuck all of you. When Trump destroys this country, you're going down in flames right along with the rest of us. But at least you'll get the satisfaction of having stuck it to them damn liberals or whatever. Fuck you.