Yes, it has come to this.

Glenn Beck feels the need to ask that his lunatic audience members not kill anyone.

Glenn, you get this nut-bags all stirred up, talkin' 'bout a revolution, then one of them kills a doctor, then one of them kills some cops, now one of them gets arrested doing recon on an Air Force Reserve base, and you're going to act shocked, shocked that this violence could somehow be linked to you and O' Reilly? This violence is utterly predictable when you're spouting your paranoid conspiracy theories at people who are already unstable to begin with. (FYI, you can tell that someone is nutty by the fact that they watch your crazy fucking show, Glenn, you smarmy little prick. No one sane watches the Glenn Beck Cavalcade of insane made-up fear-mongering.)

Glenn Beck, get off the air. Seriously, before someone else gets killed. You're worried about another Timothy McVeigh? You're creating the next Timothy Mc Veigh! And going on the air and saying, "please don't kill anyone" is not going be enough.
Posted by Professor Chaos at 5:50 PM No comments:

It's the stupidest fucking mouth-breather in all of Carolina! 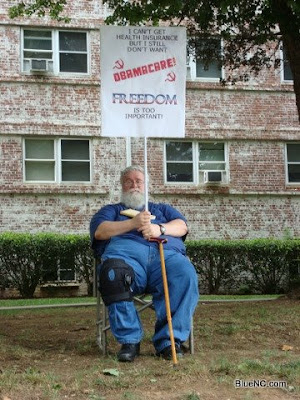 For the record, I have Nothing against the Carolinas. They've given us the Sedaris family, Steven Colbert, and Micheal Jordan. Top that, other states!
Posted by Professor Chaos at 5:37 PM No comments:

Rep. Pete King (R-NY) has his finger on the pulse of the voters!

Rep. Pete King: Health Care is Not a Major Issue Among the American People

Yes, he said that.

He then added that the French don't really care for wine, the people of Green Bay, Wisconsin don't really get in to football, and that people who voted for Pete King are totally not regretting it.
Posted by Professor Chaos at 5:06 PM No comments: