Michele Bachmann Continues to be the Stupidest member of Either House 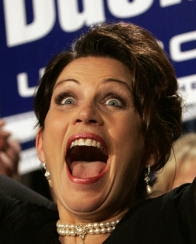 Michele Bachmann (R-Insanistan) is trying to scare people away from a National health care plan, and this is what she comes up with:


Michele Bachmann is so freakin stupid she makes my head hurt. I can not believe that the people of Minnesota actually thought that she was someone who should represent them in Congress. She actually gives a pretty good argument FOR a national health care plan while thinking that she is arguing against it. Then she warns that the government plan will put private insurers out of business, as if that should horrify us. Oh, God no! Not poor little Aetna! Not Health Net! Oh, the humanity!
Anyone who has has to deal with a health insurance company already wishes the SOB's would go out of business and their Executives should die broke, alone and unloved.

Then, because she is Michele Bachmann and there's only so long she can go without spouting loony conspiracy theories, she claims that once a person reaches 55 years of age, they will be forced to go to their doctor for euthanasia. Looks like someone thinks that "Logan's Run" was a documentary.

People of Minnesota: You need to rid yourself of this fatuous, slow-witted, deranged sideshow of a representative. Vote for anyone else in 2010. You're making Oklahoma look good and that's hard to pull off. 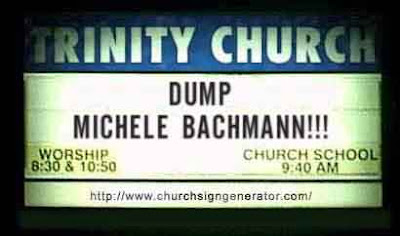