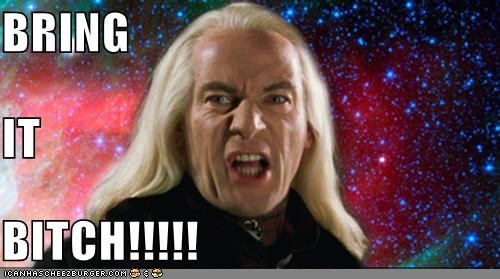 Anzor Tsarnaev, the father of the two suspects in the Boston bombings, called on his 19-year-old son, Dzhokhar Tsarnaev, to give up peacefully.
He also said, in an ABC report, that “all hell will break loose” in the United States if police kill him. He did not specify further in the ABC report.


Oh, bring it on, bitch! I will personally pay for your airfare from Shittown, Absurdistan to America so you can "break loose" all your "hell." What do you think you're gonna do, hmm? Blow something up? Yawn. Say hi to your son when Boston PD sends you to meet him. We're not afraid of you. Bring it, bitch!

With maps of US targets on his walls, North Korea's leader is boosting his warrior status with unprecedented sabre-rattling

I think the biggest threat from your nuclear missiles is that you might accidentally awaken Godzilla, and that's really more Japan's problem.

What little bitch just threw his shitty toy missile into my ocean?﻿

So, go ahead, Kim Jong Un, launch a "nuclear" attack on the US. Bring it, bitch!


Oh, you're throwing down the ultimatum, are you/ You're issuing deadlines to the government of the most powerful nation on Earth? They "come clean" or you'll go public with what you know? Well, bring it, bitch! We know you don't know shit. Whatever it is you're going to claim to know on Monday is something you made up or something the voices in your head told you about. No one believes that you have any kind of secret information. You're just a demented crackpot with a microphone. There are guys like you on street corners all over America spouting this kind of stupid paranoia. So, go ahead and reveal whatever information your 6-foot tall invisible rabbit has whispered into your ear. No one cares. You don't bluff? You make promises? Bring it, bitch!
Posted by Professor Chaos at 9:42 PM 3 comments: