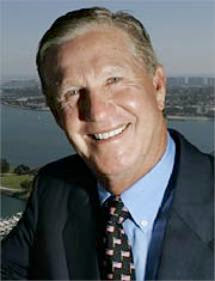 All he ever wanted to do was love his wife and have a successful marriage. His marriage was so important to him, that he spent $125,000 of his own money to get Proposition 8 on the California ballot just so he could keep the gay people from destroying the sanctity of his hetero marriage.

And proposition 8 passed, and all the same-sex marriages in California were dissolved.

So you'd think this would be the happily ever after part of the story, right?

It turns out the gay people are more resourceful than Doug had suspected. Even with their marriages annulled, they were still able to continue being gay! And being gay, they naturally went about figuring out new ways to undermine the institution of boy-girl marriage. 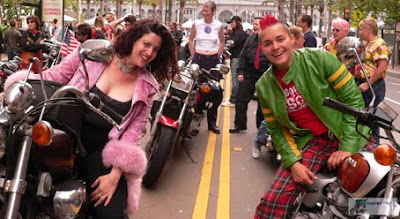 Even post-Prop 8, dykes continue to be on bikes!
So no one knows for sure what the gay people did to the Manchester's marriage, but they obviously did something, because:

Somehow, the gays got to them.

Damn it, gay people! Why must you ruin our marriages? What did we ever do to your. . Oh, yeah! Right! Touche', gay people. Well played.
Posted by Professor Chaos at 6:23 PM 1 comment:

How to be a Ludicrous, Preposterous Nut-Job.

It's easy! Just follow the example of Chuck Baldwin!

Why are internment camps being built?

Perfect! Now use the worst evidence possible to back up this claim.

Just a few weeks ago, I was aboard a cross-country flight when the passenger I was sitting next to (a total stranger) asked me to take a look out the window. He asked, "Do those look like internment camps to you?"
Nice! The "guy I sat next to on a plane" method, a classic! This technique is often used by global-warming deniers by adding the phrase "and he was a scientist!" but works equally well for backing up any absurd theory.

We were flying over Colorado, over extreme wilderness terrain, and, yes, right in the middle of nowhere, the buildings and surrounding features that I saw sure looked like internment camps to me.
One time I was on a plane and the guy next to me said "hey, doesn't that fluffy cloud look like a rabbit?' So I looked and OH MY GOD!!! GIANT FLYING RABBITS!!!!

Of course, flying at over 30,000 feet in the sky makes it difficult for any kind of detailed analysis to take place; that is for sure.
Now that's a rookie mistake. If you're going to get anywhere in the world of wingnuttery, you can never admit that your "evidence" might be at all flawed.

Then, a friend recently brought this URL to my attention:

This is an advertisement by the National Guard promoting the Military Occupational Specialty (MOS) of "Internment/Resettlement Specialist." Question: why does the National Guard need to recruit Internment/Resettlement Specialists? What do they know that we should know?
Well done. You can pretty much take for granted that your readership won't take the time to stop and think about the fact that National Guard units are deployed in two war zones and that capturing and transporting prisoners is a regular feature of warfare. Remember, if they're reading your posts, you can't possibly underestimate their critical-thinking skills.

Furthermore, I have had military personnel tell me that many of the US military bases that have been recently "closed" are also being prepared as large-scale "holding areas."

Obviously, the question that begs to be asked is, "Who is the US government planning to intern and resettle?"
Anonymous military personnel, eh? Way to be as vague as possible. Just forget that if these "military personel" exist outside of your imagination, and if they were telling you the truth that the obvious answer would be, um, "the guys from Gitmo, which is scheduled to close by year's end." Just leave the question un-answered and let the reader fill in the blanks with his own paranoid fantasies.

Then, of course, there are those who continue to deny that these internment camps exist at all. But then, were there not thousands of Germans who denied the existence of concentration camps during World War II?

Good! Nazi references are always effective. If you can work Stalin in too, your argument becomes even stronger.
You could also bring the argument closer to home by referring to another American scandal. Something like: "And aren't there millions of Americans who deny the existence of the aliens held in Area 51?" Or "Hey, millions of people insist on denying the existence of Sasquatch, yet there he is in those beef jerky commercials!" Thus, anything that large numbers of people deny is shown to be inescapably true.

Remember, If you state something as an undeniable fact, it becomes true!
Like this:

That our federal government is building large numbers of "holding areas" or internment camps seems to be an established fact. The only questions that remain are "Why?" and "For whom?"
Now the "fact" is only "established" by some guy on a plane, an ad for the National Guard, and the denials of the sane, but now that you have declared it to be an established fact, you may proceed as if it actually were. This is one of the primary rules of nutjobbery, any wild speculatory accusation which is presented as fact shall be treated as immutable truth.

At this point, the imagination can take us anywhere, (I think it already has) but it is not a little disconcerting when the same federal government that is building these internment camps begins categorizing Christians, conservatives, people who support the Second Amendment, people who oppose abortion and homosexual marriage, people who oppose the North American Union and the New World Order, people who oppose the United Nations and illegal immigration, and people who voted for Ron Paul or Chuck Baldwin (referring to yourself in the third person? why not! Professional athletes do it, and no one ever calls them douchebags)
as "extremists," or "potential dangerous militia members."
In fact, an argument could be made that by today's politically correct definition, America's Founding Fathers would be categorized as "paranoid," "extremists," or "potential dangerous militia members."

Of course, the founding fathers did raise an army, go to war with the established government, and declare themselves to be a sovereign, independent nation, so I could see where someone might mistake them for potentially dangerous militia members.

But no wingnut posting can be complete without attacking someone's patriotism. It doesn't have to be a specific person, it can be a group of people, or theoretical people, or whatever.
I would even go so far as to question the patriotism of anyone todaythat is not a little paranoid.

Now for the crowning achievement in wingnut douchebaggery, try believing shit you read on the internet:

The Internet is abuzz with news about the construction of internment camps all across America. . . all anyone need do to begin a serious investigation of the subject of internment camps is Google the phrase "FEMA Camps."
Now you've got 'em, 'cause If you have to accept that things you read on the internet might not be true, then you'd have to think that maybe there aren't hundreds of single women in your area who want to meet YOU and are totally not prostitutes at all.

So, if you follow these simple guidelines, you'll have an internet post that no one could help but believe. Let's see how our example worked out for Chuck Baldwin. Here's what he had to say:

I have had numerous readers contact me, saying that they have personally witnessed the transportation of construction materials used for internment camps
Damn, Chuck! You've got these stooges so shook up that seeing a cement truck drive by looks like proof that the gulags are being built.
Now, beginning wingnuts probably can't expect to get that kind of result right away, but if you keep at it, one day you may find your work gracing the pages of Renew America

The views expressed by RenewAmerica columnists are their own and do not necessarily reflect the position of RenewAmerica or its affiliates.
(See RenewAmerica's publishing standards.)

Oh, they have standards? Really? That must be new.

Posted by Professor Chaos at 5:21 PM No comments:

The legendary Les Paul passed away today at the age of 94. Not only one of the all-time great guitarists, Les literally invented the electric guitar and modern recording techniques like overdubbing. The word "Genius" gets tossed around a lot, but in Les Paul's case it is an understatement.

Here's Les paul performing at the age of 91 and still better than everyone else:

And Here's Les with Mary Ford back in the day:


Rest in Peace, Les Paul. There'll never be another one like you!
Posted by Professor Chaos at 5:01 PM No comments: