What is it with these people and their guns?

AUSTIN, Texas - Everyone from lobbyists to lawyers and journalists is rushing to get permits to carry guns inside the Texas Capitol, where legislators already often tote pistols in boots and purses or stow them away inside their desks.
A unique loophole in a new security procedure means a gun permit is like a special-access pass into the domed building, allowing people who are certified to carry a gun to bypass lines at the metal detectors that were set up after a shooting incident earlier this year.

So, they set up metal detectors after a shooting, presumably to prevent future shootings, but if you definitely do have a gun, you can just go right on through? How does that make any sense?
And why would you need to carry a gun into the State Capitol building? Isn't that one of the safest places you could be? Isn't it already well-guarded by trained law-enforcement personnel?

I don't get the whole concealed-carry fetish anyway. If I were walking around with a shootin' iron in my belt, I'd damn sure want people to see it. I would want muggers to take one look at me and say "not him, he's got a six-shooter!" Why would I want to pretend that I was unarmed? Do these people hope that criminals will try to attack them so that they can then pull their guns and go all Bernie Goetz on them? Okay, I probably just answered my own question.
Posted by Professor Chaos at 6:37 PM 2 comments:

For the last few days, on the way home from work, I've driven by this billboard: 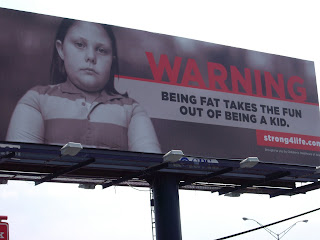 Holy shit! I mean, it's not just me, right? That is really horrible.
I mean, I get that childhood obesity is a problem. I get that young kids are getting type II diabetes at alarming rates, but do we really need this kind of fat-shaming?

Also, I'm pretty sure it's a lie. I was a scrawny kid myself, but I had a couple of friends who were fat and they seemed like they had about the same amount of fun as I did.

Yesterday I saw a poster on a bus shelter with that same little girl that read something like "Warning! It's hare to be a little girl when you aren't." (aren't little, I presume.) Which might be even more horrible.


So who is this "Strong4Life.com" anyway? I went to the web to find out.

This is the banner that greets you at their website:

The community has had enough! Enough with these fat kids!

I have had it with these muthafuckin' fat kids in this muthafuckin' community!
Then they have a selection of videos like this:

The point of which seems to be that if you are a fat mother with a fat kid, you should just hang your head in shame because you have failed as a parent!

And this one with the little girl from the billboard:

About the only other thing the website offers is the chance to "join the community" on Facebook. Apparently, the most important thing we can do to help these poor fat kids is to go on Facebook and talk about them? I don't know. I don't get it.
Posted by Professor Chaos at 5:12 PM 2 comments: