You Couldn't Make This Shit Up!

Three days after sending out an e-m,ail blast begging for sup[porters to donate $100k, which should be between-the-couch-cushions change for a supposed billionaire, one of Trump's coterie of weirdo spokespeople went on CNN to declare:

Money is not a problem for our campaign.

Honest to God, this is her LinkedIn profile picture!

Then she had this exchange with CNN host Brooke Baldwin:

“Guess what? Mr. Trump is a billionaire,” Goertz repeated. “Money is not a problem. Yeah, I’m sure all the papers are saying that. The papers need to say something about Mr. Trump: We are winning, he is the nominee in my mind.”
Baldwin noted that Trump was down 5 points in the latest CNN poll.
“That’s nothing,” Goertz scoffed. “

Wow!
That's like someone going on ESPN and saying "the Dodgers are leading the National League West." And then the host says "well, here's today's standings, and you can see that the Giants are 5 games ahead of the Dodgers." And then the first guy says "Pfft! Five games? Big deal!"

I mean, I know facts are completely optional in Trumpland, and GOPland in general, but how does someone who is supposedly a professional spokeswoman tell such a blatant obvious and easily-disprovable lie on national television? Okay, sure, it's CNN, but there are still some people watching in sandwich shops with the volume off.

Oh, and by the way, look at what this oddball lists as her previous professional experience on her LinkedIn:


Your entire professional resume consists if having appeared on stupid reality game shows, now you're a "senior advisor" to one of two people who could possibly be the next President! You couldn't make this shit up!


Oh, and speaking of shit up which you could not make, this is Trump's actual fundraising email: 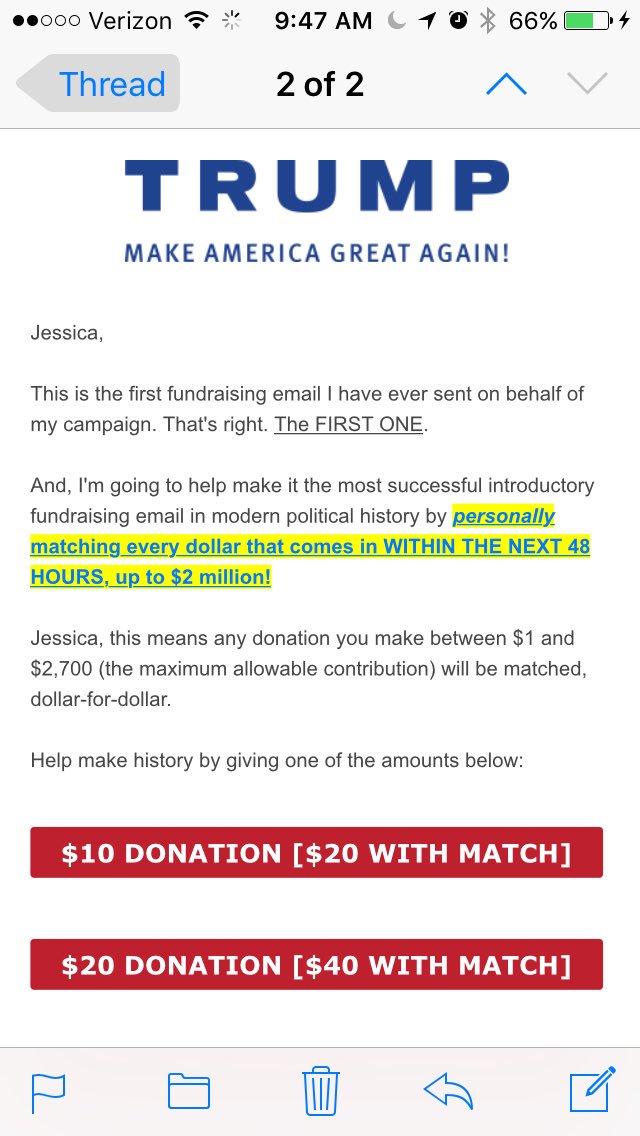 How is this matching funds bullshit supposed to be an incentive? Generally, when one does the matching funds thing, it's for funds given to a third party. It's not "for every dollar you give to me, I will also give a dollar to me." That's not helping. If anything, that just seems like you really don't need the little people's donations. If you have $2 million ready to toss into the pot, why the hell should I give you my 10 or 20 hard-earned bucks? Just so you can say that your fundraiser was "the most successful in modern political history?" ( Modern political history, mind you. Even Trump couldn't compete with Constantine the 4th's marketing prowess.)
Seriously, matching funds donated to yourself? You couldn't make this shit up!