Firswt of all, she spells her name "Nikki." Generally, that spelling is reserved for sex industry workers and the  bass player of Motley Crue.

But that's not the real issue. I'm pretty sure spelling doesn't count for much in South Carolina conservative circles.

But here's a fun story about Gov. Haley:

Well, up until recently she was a member of the board of trustees for the University of South Carolina.
Go, Cocks! 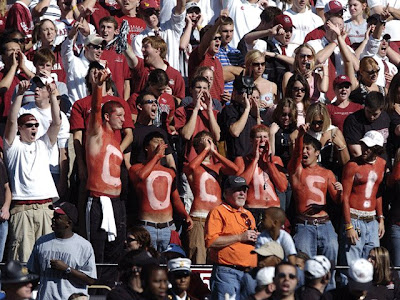 Not only was she a member of the board, she was also a major patron of the school. In fact, their business school is named the Darla Moore School of Business. So, it's probably safe to say she was comitted to the University and felt pretty passionately about it.

But don't take my word for it:

Miles Loadholt, chairman of the board, said Moore's contributions to the university have been priceless.

"The importance of Darla Moore's philanthropy cannot be overestimated," he said in a statement. "Her constant push for excellence not only at a state level, but in a global context, will be a standing legacy and among her many contributions to the university."

So why replace her? Well, there are two reasons. The first is that Ms. Moore hurt the governor's wittle feelings. (sideways frowny-face)

As Haley explains events, Moore lost her seat basically because she didn’t express sufficient interest in keeping it. She didn’t return Haley’s calls, as the governor tells it, and when Haley tried to meet with Moore, there was a three-week wait.

The governor told me she couldn’t wait. She has only one voting member on the board and, says Haley, “I have to pick one who will report to me and return my calls.” (source)

How very mature of you, Madame Governor!

The second reason? To reward a campaign donor.

So, sure it's fine to be an extremely generous donor and an asset to the University for over a decade, but how does that enrich me personally?

So much for the teabaggers getting in there and cleaning out corruption, eh?

By the way, here is Ms. Moore's response to her removal:

Her response to Haley’s insult was to offer the university another $5 million for an aerospace research center to be named for fellow Lake City star Ronald McNair, an African American astronaut who died in the Challenger explosion in 1986.

Yeah, I could see where you'd feel like you needed to get rid of her!

﻿
Posted by Professor Chaos at 6:19 PM No comments:

The video the Wisconsin GOP doesn't want you to see! - *gasp*

.This complete video, once on YouTube and then on the Talking Points Memo website, has been yanked from both, simply because of the heat a rookie republican congressman (and former reality tv star) got for daring to mention he's having trouble getting by on "only" $174,000, partly due to higher health care costs because of worse federal coverage than he was used to from Wisconsin as a District Attorney.

First the Republican Party in Polk County, Wisconsin, pulled the tape of Rep. Sean Duffy (R-WI) fretting about making ends meet on his $174,000 a year salary from its own website. Now they want it gone from the whole Internet.

For a couple hours, the local county GOP was successful. But we've put an excerpt of the video back up.

A day after TPM posted the video we obtained of Duffy talking about his salary at a Polk County town hall meeting earlier this year, the Polk County GOP contacted the video provider we used to host the video, Blip.tv, and demanded the video be taken down.

The tape caused a stir for Duffy, a first-term conservative best known for his past as a reality TV show star on MTV's The Real World. Democrats flagged the comments about his taxpayer-funded salary (which is nearly three times the median income in Wisconsin) and criticisms began to flow Duffy's way.

In the clip, Duffy is asked whether he'd support cutting his own salary. Duffy says he would, but only as part of a plan where all public employees' salaries would be cut. He then said that the $174,000 in salary (not including benefits) he receives is a squeeze for his family of seven to live on:

I can guarantee you, or most of you, I guarantee that I have more debt than all of you. With 6 kids, I still pay off my student loans. I still pay my mortgage. I drive a used minivan. If you think I'm living high on the hog, I've got one paycheck. So I struggle to meet my bills right now. Would it be easier for me if I get more paychecks? Maybe, but at this point I'm not living high on the hog.

No doubt Crooks and Liars will receive a similarly sternly worded cease-and-desist letter, and the clip will be pulled from here also. But for now, here is the clip the Wisconsin GOP are so scared of being seen. (Can this story get any more pathetic?)