So the Universe Does Revolve Around Me? Ha! You Were Wrong, Mom!

Apparently, there is a group who believes that Galileo Was Wrong! 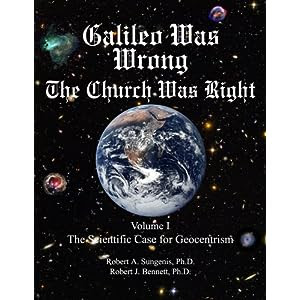 This is a real book, by the way. You can find it at Amazon.com.

Anyway, the people behind the Geo-Centrism revival are having a conference.

When I tried to take a look at their website to find out about this conference, I got this:

The server is temporarily unable to service your request due to the site owner reaching his/her bandwidth limit. Please try again later.

Because, I guess in order to expand your bandwidth capacity, you need someone with a working knowledge of science.

And here's a summary from Techeye.net

The big idea is that the truth of Geocentrism is known by the powers that be but they are hiding it. We guess it is because it proves everything that the Bible and the Church has said before Vatican II was completely right.

Dr. Robert Bennett is going to show scientific experiments indicating that the earth is motionless in space.

Also to be discussed at the forum:

The Common Cold: Caused by evil fairies or witchery?

Crop Failure: Can aught but witchery be to blame?

Attractive Women: Are any of them Non-witches?