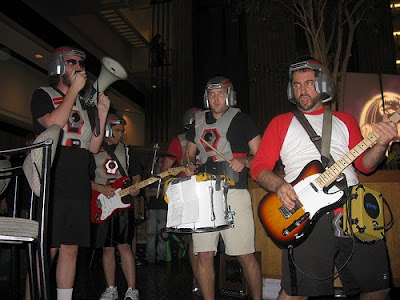 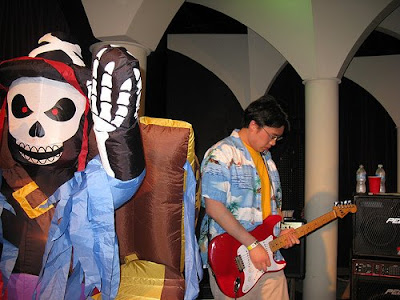 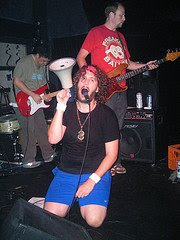 Atlanta's own Attractive Eighties Women need your help to record their new album.

Are they worth the money? You be the judge:

Go here (LINK) to donate, and tell 'em the perfesser sent ya!
Posted by Professor Chaos at 6:11 PM No comments:

Someone Save Sheppard Smith!

How long can Sheppard Smith survive on FOX with one foot in the real world?

First there was this:

Now it seems that his having a grasp of reality has earned him the wrath of the FOX watchers. Here are a few excerpts from the transcript of his latest show:

I read a lot of email around here, and the email, to me, has become more and more frightening. This is not a new thing. It’s been happening over the past few months. It’s been happening, you know, to some degree since the election process went along.

I’m going to read to you a little bit from one v — and I’m not going to read the name. But this is, I promise, a representative sample of the kinds of things we get here:
“Shepard, how dare you tell us to get over Obama not being a U.S. citizen. Where is the birth certificate? Where? He won’t show it, so why are you so trumped up to believe it? I cannot stand Hussein. He is a socialist-Marxist who is at fast rate destroying our country.”

If you are one who believes these sorts of things about the president of the United States — and I could read a hundred of them like this…I mean from today. People who are so amped up and so angry for reasons that are absolutely wrong, ridiculous, preposterous. Yet they are mad. They are very mad that I just called it preposterous…
And as if to prove him right, the wingnuts responded with e-mails to the official website of the lunatic fringe "Free Republic."

Let FoxNews know how you feel about this little angry queer.

I am DONE with FoxNews. They fire this asshole or I am gone.

Wow, I think that might be what we call delusions of grandeur. Do you have any idea how many viewers FOX has? Do you think Rupert Murdoch gives a flying fuck if one inbred mouth breather takes his business elsewhere? Ooh, I'll show them, I'll stop watching! Then they'll have to give in to my moronic demands!

We need to call Fox and complain. This is ridiculous! This guy is just your run of the mill jew hater..JUST LIKE THE MUSLIM TERRORIST THAT KILLED ONE OF OUR SOLDIERS!!

This stuff is being stoked by our president kissing up to terrorists and pulling away from Israel! Obama hates jews too!

Shep having a meltdown right now and mentioning the DHS memo like this now makes it legitimate and bringing up the guy’s military background. I wish I could reach through the TV and ring his scrawny little neck sometimes.

yeah, you should totally try that. If you hit the screen hard enough, you'll go right through it! Then you can wring some necks!
Shep Smith blaming people who “question Obama’s birth certificate…THIS MUST STOP!” and also referred to those who think Obama is a Muslim as “garbage.”
Actually, I think he referred to the crazy notion that Obama is a "secret muslim" as garbage. Not those who believe this particular brand of bullshit. But here, I'll say it for him. If you think that President Obama is a secret Muslim You are Garbage! There, how's that?
Posted by Professor Chaos at 5:41 PM No comments: