(via Think Progress)
The Heartland Institute has launched one of the most offensive billboard campaigns in U.S. history. The Chicago-based anti-science think tank is comparing all those who accept climate science — and the journalists who report on it accurately — to Charles Manson, the Unabomber, and Osama Bin Laden. 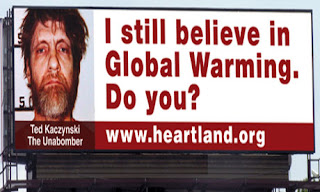 What is that even supposed to mean? That Global warming is such an obvious truth that even a nut like the Unabomber can see it?
No, it's the Heartland Institute, your number one source for science-denial since, I don't know when, I'm not going to bother to look it up.

Here's their explanation for this gross campaign:

These rogues and villains were chosen because they made public statements about how man-made global warming is a crisis and how mankind must take immediate and drastic actions to stop it.


So you can discredit a scientific finding by pointing out that some bad people believe it? Is that effective?

Gravity. Hitler believed in it.

Why did Heartland choose to feature these people on its billboards?

Because what these murderers and madmen have said differs very little from what spokespersons for the United Nations, journalists for the “mainstream” media, and liberal politicians say about global warming.

And everyone knows that murderers and tyrants are terrible at science! So, if they believe something, it necessarily follows that that belief is false.

Augusto Pinochet: murderer, tyrant. Believed in Jesus.
(or does believe, is he dead yet?)

The point is that believing in global warming is not “mainstream,” smart, or sophisticated. In fact, it is just the opposite of those things.

How is that the point? Believing in global warming is absolutely mainstream, so much so that even guys who live in prison, and so probably have very limited access to new scientific data, understand that it is true. And it doesn't matter whether or not science is accepted by the mainstream anyway. The mainstream is chock full of idiots, ignoramuses and nuts. 80% of Americans think that the government is hiding information about aliens.  Not the immigrant kind of aliens, SPACE ALIENS! Over 50% believe in ghosts.

The most convincing evidence so far.

Still believing in man-made global warming – after all the scientific discoveries and revelations that point against this theory – is more than a little nutty. In fact, some really crazy people use it to justify immoral and frightening behavior.

Name one! Name one person who has used his belief in global warming to justify some sort of immoral and frightening behavior!

Science made me do it!

Of course, not all global warming alarmists are murderers or tyrants. But the Climategate scandal and the more recent Fakegate scandal revealed that the leaders of the global warming movement are willing to break the law and the rules of ethics to shut down scientific debate and implement their left-wing agendas

That Is A Lie.

That is also a lie. You may be right about 60% of the public, but not most scientist. At least, not the scientists whose field of study is at all relevant, like say climatologists.

The people who still believe in man-made global warming are mostly on the radical fringe of society. This is why the most prominent advocates of global warming aren’t scientists. They are murderers, tyrants, and madmen.

What fucking world do you live in? None of these villains is a prominent advocate of, um, anything.
And as for the people who do "still believe" in man-made global warming, do these people sound like fringe radicals to you?

Anyway, they actually seem to have put more time into this explanation of their campaign than the actual campaign itself, because it's already over:

UPDATE: Heartland ended their gruesome failure today at 5 pm, but in a release, refused to admit it was a mistake or apologize. Heartland Institute President Joseph Bast tried to call this an “experiment” even though a series of billboards were planned (see below) and stated, “We do not apologize for running the ad.” So, apparently, no lessons learned for the disinformers. What caused them to fold, then? The Washington Post‘s Greg Sargent reported:

You know you are off the deep end of anti-science extremism when you’ve offended the sensibility of Sensenbrenner,