Fun With the Wall Street Journal

Someone left a copy of the Wall Street Journal lying around at Chic-Fil-A the other day, and since I had nothing else to read, I decided to flip through it.

Dude, I am so sorry!
The first item I see is this:
﻿Sociology and Other 'Meathead' Majors

Okay, so this guy doesn't like sociology. So what's his criticism of this field?

That great American democrat Archie Bunker used to call his son-in-law "Meathead" for his fatuous opinions, and Meathead was a graduate student in sociology.

That's really part of your argument against sociology? That a character on a TV show used to make fun of another character on that TV show? A TV show, by the way, the point of which you seem to have missed entirely. The whole joke is that Archie is generally wrong about everything because he is narrow-minded and prejudiced, and My God, have you ever seen All in the Family?

Archie also used to call his son-in-law a "dumb Polack." Should we use this to build an argument against Poles?

Part of the problem is the political correctness responsible for "Gender Studies," a politicized major that has its little echoes in many other departments, and that never fails to mislead.

When they said we were going to get to study women. . .
Well, I call that misleading!

More fundamental, however, is the division within the university today, in America and everywhere, between science and the humanities. Science deals with facts but the humanities also have to deal with values. This is where the problem of bad choices arises. We think that one can have knowledge of fact but not of values—the famous "fact/value" distinction.

The distinction so famous, you'ver never heard of it!


Science has knowledge of fact, and this makes it rigorous and hard.

The humanities have their facts bent or biased by values, and this makes them lax and soft.

This fact—or is it a value?—gives confidence and reputation to scientists within the university. Everyone respects them, and though science is modest because there is always more to learn, scientists sometimes strut and often make claims for extra resources. Some of the rest of us glumly concede their superiority and try to sell our dubious wares in the street, like gypsies. We are the humanists.

Wait. You're not in one of the "hard sciences?"

Mr. Mansfield, a professor of government at Harvard, is also a senior fellow of Stanford's Hoover Institution.

Government? A professor of government? Jeezus Christ, you're a social scientist! How is government any more hard or ridgid or. . .

Just as Gender Studies taints the whole university with its sexless fantasies, so economists infect their neighbors with the imitation science they peddle. (Game theorists, I'm talking about you.)

Okay, I'm a little confused. How can the study of gender be "sexless?"
And if it's "sexless," how is it a fantasy?


So quit mocking the Government Department, you asshole scientists!

Know How I Know?

1) Know how I know that Anthony Weiner is innocent?
Because Andrew Breitbart is involved.

In the same way that if Hugh Heffner is involved with something, it's going to involve naked women, if Andrew Breitbart is involved, it's a dishonest slander. Not that that's going to keep CNN from having him on and pretending he hasn't been shown over and over again to be a baldfaced liar. Damn liberal media!


Honest to God, how does the coversation in the newsroom not go something like:
"Hey, a congressman is involved in some sort of dong-related scandal!"

"Oh, that could be big news, who's the source?"

You might as well report stories form The Onion. At least there's an off-chance that they might accidentally be true.
But no, you bring this pile of sleaze onto your show to spout even more scurrilous allegations about Rep. Weiner supposedly having "relationships with young women?"

This guy is getting lots of young women? This guy? Really?

2) Know how I know that Gov. Rick Perry has ZERO chance of ever being president?

Because Bill Kristol thinks he would be "formidable."

Remember the last wingnut governor that Kristol thought would be a powerful national political force?

How'd that work out again?

“If [Hillary Clinton] gets a race against John Edwards and Barack Obama, she’s going to be the nominee. Gore is the only threat to her, then. … Barack Obama is not going to beat Hillary Clinton in a single Democratic primary. I’ll predict that right now.” —William Kristol, Fox News Sunday, Dec. 17, 2006

So, even if Gov. Perry hadn't flirted with the idea of secession, even if he hadn't done this:

Texas, which may balance its budget by firing thousands of teachers, plans to commit $25 million in state funds to Formula One auto racing each year for a decade. 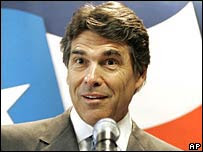 He would still have no chance just because the laws of nature dictate that anything coming from the mouth of William Kristol is necessarily  going to be incorrect. If God Himself had planned on making Rick Perry president, he would have to change his plans after hearing William Kristol put his stink on Perry.

Kristol said "formidable?"
Augh, now I have to send Perry to a crushing, humiliating defeat!
Posted by Professor Chaos at 11:20 AM No comments: