Does Nancy Pelosi even want to win?


In what alternate universe does Nancy Pelosi live?

Pelosi Warns Democrats: Stay in the Center or Trump May Contest Election Results


Does Ms Pelosi honestly think that there is a scenario in which Donald Trump loses the election and doesn't contest the results? For God's sake, he spent a year contesting the results of the election he WON!

There is no way - NO WAY - that Trump will ever admit defeat. He will never shake the hand of whichever Democrat defeats him in 2020 and say "congratulations and good luck." He will probably have to be forcibly removed from the Oval Office by the capitol police.

Or he may go peacefully. And spend his remaining years telling anyone who will listen about how the deep state and the Democrats stole the presidency from him. But if he loses, there is no way in Hell he just accepts defeat.

I mean, for God's sake, he won't even admit to having been a shitty businessman who lost a billion dollars of his father's money. He's out there saying that he lost that money intentionally for tax purposes because he's so smart.

I meant to do that!


“If we win by four seats, by a thousand votes each, he’s not going to respect the election,” said Pelosi in an interview with the New York Times.

He doesn't have to respect the election (And he won't). He just needs to make a funny landing when he's tossed out on his ear.

And take Pence and Bolton and Mnuchin with you!

“He would poison the public mind. He would challenge each of the races; he would say you can’t seat these people,” she added, and referenced the 40 House seats gained by Democrats in 2018 midterm elections.

You know what, though? He didn't do that. He didn't challenge the legitimacy of the various Democratic election winners. Because they aren't him. So he doesn't give a shit about them. Donald Trump only cares about people whose name rhymes with Schmonald Schump.
And also, so what if he did? The only people who would take that seriously are the 35% of Americans who already think that Hillary Clinton was running a child sex ring out of a pizzeria when she wasn't having Seth Rich murdered and that some mysterious stranger with a "Q" level security clearance is sending them coded messages on Reddit. Those people still think that Barack Obama wasn't really president because Hawaii is part of Kenya.


“We had to win. Imagine if we hadn’t won — oh, don’t even imagine. So, as we go forward, we have to have the same approach.”


Sitting in her office, Ms. Pelosi . . . offered Democrats her “coldblooded” plan for decisively ridding themselves of Mr. Trump:
. .  .do not risk alienating the moderate voters who flocked to the party in 2018 by drifting too far to the left.
“Own the center left, own the mainstream,” Ms. Pelosi, 79, said.

“Our passions were for health care, bigger paychecks, cleaner government — a simple message,” Ms. Pelosi said of the 40-seat Democratic pickup last year that resulted in her second ascent to the speakership. “We did not engage in some of the other exuberances that exist in our party” — a reference to some of the most ambitious plans advocated by the left wing of her party and some 2020 candidates, including “Medicare for all” and the Green New Deal, which she has declined to support.

Oh, right. Of course. Of course you managed to learn exactly the wrong lesson from 2018. You sure wouldn't want to alienate the elusive "moderate" voters with a radical plan like the Green New Deal which is only supported by. . . **quick Google search**. . .

So Nancy Pelosi thinks that it is vital for Democrats to not only defeat Trump, but to do so by a wide margin, and part of her strategy to achieve this wide margin of victory is to run away from a policy that is supported by OVER EIGHTY PERCENT OF AMERICANS?!?!?!?
And this is who's in charge of the party?


Okay, so maybe she's wrong about the Green New Deal. What about opposing Medicare for All? Surely that must be a smart political stance, right?

70 percent of Americans support 'Medicare for all' proposal

So, instead of running candidates who support policies favored by 70 - 80% of voters, you want to do what, again? 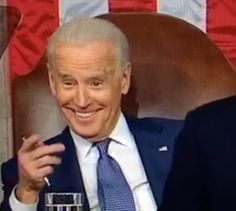 Joseph R. Biden Jr. “took off because people know him,” she said. “They trust him.”


No. See, they either know him or they trust him. Not both. People who know Joe Biden know about shit like this:

I like how @JoeBiden told Obama that he didnt want his endorsement.
I really like how he used Obama's voice in his first Campaign video, instead.

Shows us the real Joe Biden #SlimyJoe #BidenIsARepublican
Give us a real democrat #BERN #FeelTheBern2020 pic.twitter.com/30wr4u0TLP
— Rocks~1968 All Over Again (@julynewmoon) April 30, 2019

So, you're dealing with an electorate that is 70 percent in favor of Medicare for All, and you want to trot out a guy who's been looking to CUT Medicare for basically his whole career? And you're supposed to be the reasonable one?


Oh, and does it occur to you that we are now doing politics in the #MeToo era?


When asked whether Mr. Biden would pay a political price for his grilling of Anita F. Hill during the 1991 confirmation hearings for Justice Clarence Thomas, Ms. Pelosi shook her head in the negative and waved a hand dismissively.

Honest to God, Madam Speaker, just open up Twitter and search "Anita Hill." You are so out of touch with the electorate.


More than anything, Ms. Pelosi is focused on pursuing center-left policies she thinks will help her party out in 2020 — a focus on pragmatic improvements to health care,

Oh my God. People do not want "pragmatic improvements" to healthcare. We want what the rest of the modern world has. We want single payer. How do you not get this? And we are sick and tired of being told that it isn't "practical" or "pragmatic" or "feasible" when we know good and damn well that it is. We know they do it in Canada, the UK, Australia, the Netherlands, etc etc etc and we know the only reason we don't do it here is because our politicians are too afraid of upsetting the billionaires who run the insurance companies.

You want to beat Trump? Good. So do I. So does every decent person. You don't do it by trying to play down the middle. You know who tried your approach of "owning the center-left" and not alienating the "moderates?" Hillary Clinton. How did that work out again? She lost. And before anyone comes back with "actually she won, because she got 3 million more votes. . ." yes, I know that. But as long as we have this verkackte electoral college, you can get 3 million more votes and still lose if you don't get enough of those votes from the "swing states." And the way you get those voters from the swing states to show up and pull the lever for you is to offer them something to vote FOR, not just a villain to vote against. You have to offer something that they want. And what they want is Medicare for All and a Green New Deal. If you can't figure that out, maybe you're in the wrong line of work.

Oh, and P.S. Joe Biden has run for President at least twice and caused barely a ripple. The only memorable thing about either of his campaigns was his being caught plagiarizing. Joe Biden is not a horse you want to back. Not if you want to win.