Every year, it seems one of these wingnuts calls for a boycott of Girl Scout cookies, forcing me to buy even more to make up for them.

AOC WAS A GIRL SCOUT … JUST SAY NO TO THE COOKIES

Trying to imagine the monsters who could say "no" to these little faces!


March 8 is officially International Women’s Day, but it is the catalyst for week-long events held throughout this country and around the world. Sounds harmless, if not downright inspiring to many unsuspecting women and girls who want to celebrate the right to be all that they can be. Unfortunately, it comes with a lot of baggage you may not want for your daughter or yourself.


I'm not clicking on that link. You click on it.


This annual event was begun in 1909 in New York by the Socialist Party of America. In 1917, it became a national holiday in Russia and was primarily celebrated by the socialist movement and communist countries until 1975 when it was embraced by the United Nations.

This years theme is “Balance for Better” aimed a building a “gender balanced world.” What could possibility be wrong with that? Nothing, unless it is artificially enforced and government-imposed on women who prefer not to be forced into jobs they don’t want or the full-time workforce at the expense of their families

Yes. Yes, that is exactly what would happen. If we were to ever achieve a truly gender-balanced society, housewives everywhere would be getting dragged from their houses screaming "NO! My husband is a doctor! I don't need a job! I want to stay home with my babyyyyyy!!!!" And the jackbooted government balance thugs would throw back their heads with cruel laughter "hahahaha! She wants to stay home with her baby! Well, you should have thought of that before you worked towards a gender-balanced community. To the workplace with her!"

As if forcing women to work outside the home against their will would ever be anyone's goal! Ha! As if!

. . . forced into jobs they don’t want or the full-time workforce at the expense of their families, which is the goal of many radical feminists.


Oh. I stand corrected. Shame on you, "radical feminists!"

Now for any movement to achieve worldwide success and sponsorship, it has to wrap itself in a cloak of righteousness, virtue and morality. IWD achieved that goal, in-part, by partnering with WAGGS, the World Association of Girl Guides and Girl Scouts.


It is no small coincidence that the Girl Scouts are out in force this month selling cookies on street corners, in front of grocery stores and other places of business. For many years, I would buy at least one box from every girl I met, even if I had a dozen or more boxes at home.
The Girl Scouts were an important part of my formative years, and I sold hundreds of boxes of these cookies myself, so I considered it payback, paying it forward so to speak.


Oh. So you used to be a normal person?
What the hell happened?

Today’s Girl Scouts are a far cry from those of my youth, which trained us to put God and country before everything else. Today, God in the Girl Scout promise has an asterisk, meaning the great I AM and His moral absolutes can be replaced by anything, including oneself.

So. . .they stopped tryng to indoctrinate young girls with religious and patriotic propaganda?
Dear god! I mean, what if a little Muslim girl was to feel comfortable joining the scouts? Or a Hindu? Or what if  little girl whose parents have opted not to raise her ion any particular religious tradition was able to join the scouts and not feel ostracized or unwelcome? Can you imagine the horror? 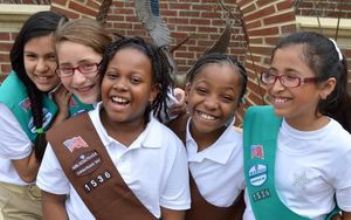 No, don't look. It's too terrifying!


Country, also, has taken a backseat. The emphasis is on global citizenship, which is fine unless you stop to consider that most of the world is not free and the world’s values are often at odds with our own.

Yeah, I mean most of the world doesn't even tear immigrant children away from their parents and lock them in cages!
And did you know that in much of the world it is actually considered immoral to allow someone to die from an easily curable disease just because they don't have enough money? Would you want your daughters to pick up "values" like those?

Okay, so can we just skip ahead to the AOC part?

In fact, the Girl Scouts are celebrating the victory won by their alums in the 2018 midterms on its website, beginning with their star, Alexandra Ocasio-Cortez, who attributes much of her success to what she learned as part of this organization. Now Girl Scout alums make up 72 percent of female senators and 60 percent of the women in the 116th Congress. Although the website tries to strike a bipartisan tone, it is no accident that, among this year’s freshmen, Carol Miller is the only Republican


Yeah. . . I'm not sure you're making the point you seem to be trying to make. The fact that there are many fewer women on the Republican side of the aisle than the Dem side says more about your shitty party than it does about the Girl Scouts.

Also, I clicked on that link and not only is Ms Ocaso-Cortez not the first alumna listed, she is not even the first member of Congress mentioned. The list begins with two new Senators, then lists Congressional Representatives alphabetically, starting with Iowa's Cindy Axne. AOC is the SEVENTH member listed. Ninth overall. It's not a very big point, but why would you lie about this? Why say the Girl Scout website "celebrates. . . beginning with their star Alexandria Ocasio-Cortez" when they absolutely do not begin with her?


When feminist Betty Friedan was put on the national governing board the Girl Scouts began purging their materials of all positive references to homemakers.

See, now that I know you've lied at least once, I have no way of knowing whether this "purge" actually happened or not. I mean, I could probably research it, but I left college a long time ago and no one can make me do research anymore. Anyway, if this so-called "purge" did happen, I say brava! If little girls want to grow up to be hausfraus, more power to 'em, but they hardly need an organization pushing it on them.

Ugh. How many times does this need to be debunked?
Girls Scouts is an organization of and for little girls. They are NOT involved with Planned Parenthood. Planned Parenthood is a wonderful organization, but it would be wildly inappropriate to discuss topics such as birth control  with these little angels.

So before you decide to embrace an International Women’s Day celebration or buy the cookies, ask yourself, “Will the country be better off with more representatives like the young socialist Alexandra Ocasio-Cortez?”