thereWe spent parts of last Friday and Sunday evenings at Black Lives Matter rallies here in Atlanta. And I can tell you as a dorky middle-aged white guy, I never once felt at all threatened, unsafe, or unwelcome. There was no hint of violence or hatred in these demonstrations. So if there are violent clashes in the future, it won't be these folks who are to blame.

The people who will be to blame will be those people who seem intent on stirring up a "race war" of some sort. People like former US Congressman and current piece of shit Joe Walsh, who infamously tweeted this after 5 cops were murdered in Dallas:

It's shocking. Even after all these years of seditious threats from various right-wingers, this still seems shocking. This could not be a more obvious call to racially-motivated violence. Not since the Manson Family scrawled "PIGS" on the walls of the Sharon Tate's home has there been a more blatant attempt to start a race war. 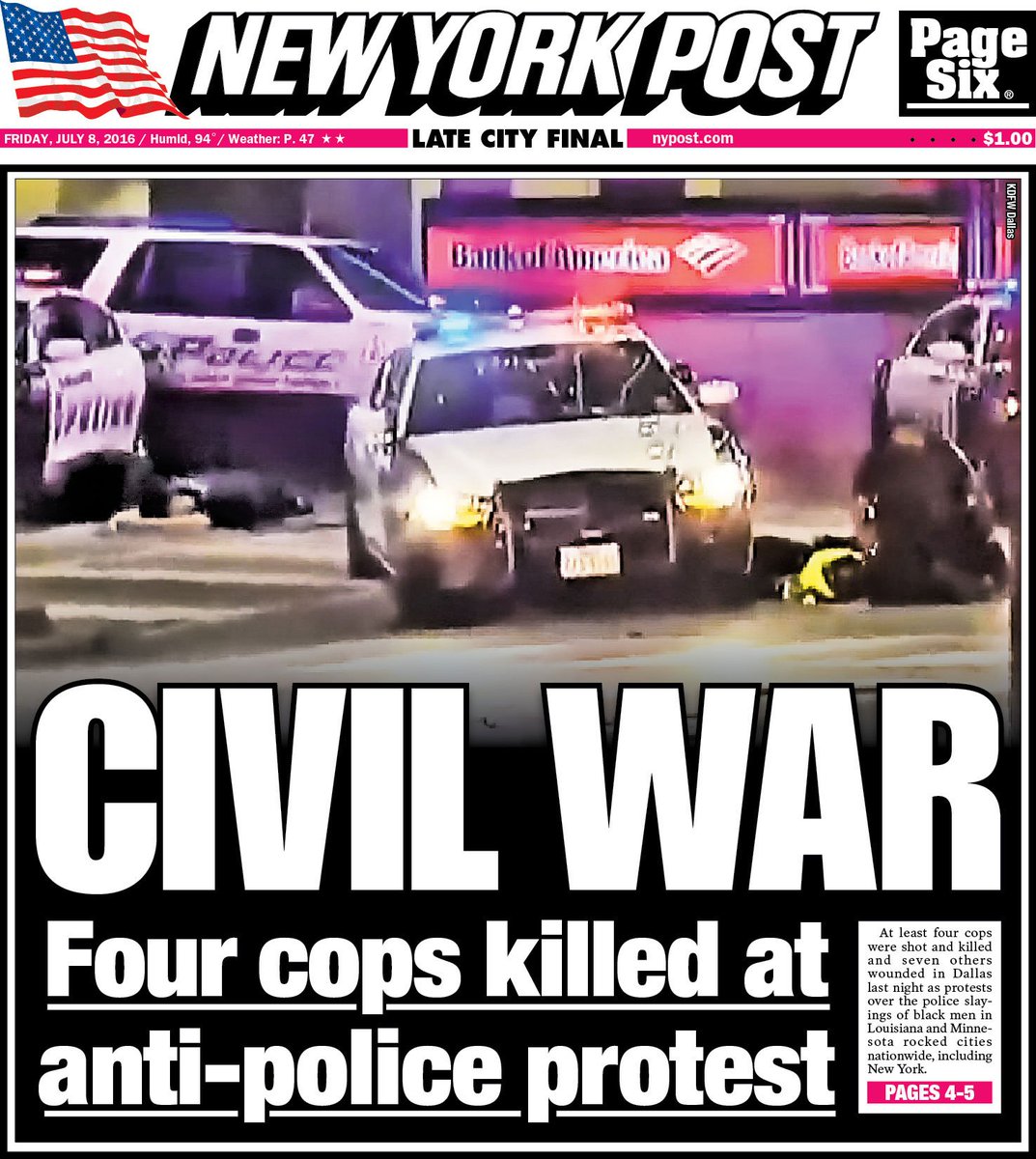 Then there's this little piece of shit "reporter" trying unsuccessfully  to goad BLM protestors into violence.


The sense of superiority and condescension is just sickening as he asks the woman in the beginning of the video " I asked you why you are (unintelligible) the police and why you're here. Tell me why you are here." He sounds like a cop interrogating a suspect,  or a middle-school vice-principal demanding to see a hall pass, demanding an answer as if  this woman is required to answer to him like he's some sort of authority figure.

I will say this though, kudos to the St Paul police department who sent officers on bicycles wearing polo shirts instead of the militarized body-armor-wearing shock troops most departments use to police peaceful demonstrations.

But the most sickening of all is former New York Mayor and current bag of scum Rudy Giuliani.

On this Sunday's Face the Nation, he had this to say about black lives:


Jeezus, here we go again. I don't know where this thought process comes from -  a: that it's no big deal that cops kill black people because black people are also sometimes killed by other black people, and b: that it's just somehow absurd to hold police officers to a higher standard than Chicago gangbangers.


So he's going with the old "people who talk about racism are the real racists" canard? Jeez, it's like these racist pricks all get their talking points from the same -- oh, right!

Then this arrogant open sewer of a man has the balls, the unmitigated gall, to lecture black parents:

If you want to deal with this on the black side, you’ve got to teach your children to be respectful to the police, and you’ve got to teach your children that the real danger to them is not the police, the real danger to them 99 out of 100 times … are other black kids who are going to kill them. That’s the way they’re going to die.

Jeezus Christ! First of all, "you've got to teach your children to be respectful of the police?" Why is it assumed in this country that being disrespectful to a cop is grounds for being murdered? This is America. Once, many years ago, I found myself in an auditorium with a sitting United States President, Ronald Reagan. (long story) A group of us booed him, chanted anti-GOP slogans,. and at one point all raised our hands with our middle fingers extended. And the President of the United States, the most powerful man on Earth, couldn't do a damn thing about it. Because this was America. Well, technically, he did do one thing, he zinged us when we were chanting "We Like Mike" in reference to Micheal Dukakis, he said "see, his supporters can't even find the right rally" which, credit where credit is due, was a pretty good zing. But that was it. No one beat us or arrested us or shot us. Because this was America, where you don't have to be respectful if you don't want to be.
If you're stopped by a police, sure it's smart to be respectful. Also, in a lot of cases, it's the right thing to do because he's just a person doing his job. But if you are being stopped, harassed, treated like a criminal because of the way you look, that cop is really not worthy of your respect. And showing a lack of respect to an authority figure has never been a capital offense in this country.

But what makes the whole "teach your kids respect" bullshit even more disgustingly offensive is that this is exactly what black parents do. Ask any black parent, they'll tell you. Here are a few things that, according to this article on Gawker, black parents have to tell their sons:


Get stopped for a traffic violation: Use your Sunday school manners. Keep your hands where they can be seen, and above all else, do not argue.

Ask the police before you reach for your license. Ask the police for permission to get your insurance card and registration out the glove box. Do not answer any questions. Just do as you are told.

You answer their questions if they ask you with 'yes sir' and 'no ma'am' unless it is incriminating, then you exercise your right to be silent. Don't talk back, don't even slouch, pull up your pants. Be polite, no sudden movements.


And this prick, this champion of police brutality ( Remember "Giuliani Time?") has the audacity to sit there and lecture black parents about teaching their kids "respect?"


And then he wants black parents to tell their kids that the real danger to them is other black kids?

I’d also say, be very careful of those kids in the neighborhood and don’t get involved with them because, son, there’s a 99 percent chance they’re going to kill you, not the police. And we’ve got to hear that from the black community.

So this vile pigfucker wants black parents to sit down with their kids and say "Son, remember to avoid people who look like you. We black people are tho real danger to you. You know how we are, there's a really good chance that if you hang out with horrible black people like say, your mother and I, or your siblings or any friends from the neighborhood, there's a really good chance one of us will murder you. That's just how we are!"

There are a lot of people about whom I might say "he makes me sick," and usually that's just a figure of speech, but Rudy Giuliani actually makes me physically nauseous. And as long as he continues to lead his living dead existence with enough breath to vibrate his vocal cords, the networks will keep inviting him onto their airwaves and pretending that he isn't a loathsome despicable excuse for a human being.
Posted by Professor Chaos at 7:02 PM 5 comments: