Because I paid more taxes than General Fucking Electric.

And so did you, assuming you paid more than zero.

(from the NY Times)

The company reported worldwide profits of $14.2 billion, and said $5.1 billion of the total came from its operations in the United States.
Its American tax bill? None. In fact, G.E. claimed a tax benefit of $3.2 billion. 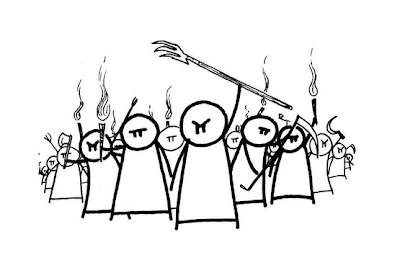 Where's an angry mob when you need one?

How much money does GE get from government contracts? How much do they get paid to build weapons to knock down Iraq, and how much are they getting paid to participate in Iraq's "reconstruction?" I don't know, I don't have time to research it, but obviously, it's way too much. If this company is unwilling to pay a cent towards making the US a strong nation, why the hell should it get to profit off of us?

Its extraordinary success is based on an aggressive strategy that mixes fierce lobbying for tax breaks and innovative accounting that enables it to concentrate its profits offshore.

And yet, according to Think Progress:


This year, 14 unions representing more than 15,000 workers will negotiate a new master contract with General Electric. Among the major concessions GE has signaled that it will ask of union workers is the elimination of a defined contribution benefit pension for new employees, a move the company has already implemented for its non-union salaried employees. Likewise, GE is signaling to the union that it will ask for the elimination of current health insurance plans in favor of lower quality health saving accounts, a move the company has already implemented for non-union salaried employees as well.
In addition, General Electric may ask some workers for a wage freeze. Since the recession began in 2007, GE threatened to close plants in Schenectady, NY and Louisville, KY unless workers took wage concessions and adopted two-tier wage structure.

Otherwise, how could they afford to pay all those accountants and lawyers to help them cheat on their taxes?

G.E.’s giant tax department, led by a bow-tied former Treasury official named John Samuels, is often referred to as the world’s best tax law firm. Indeed, the company’s slogan “Imagination at Work” fits this department well. The team includes former officials not just from the Treasury, but also from the I.R.S. and virtually all the tax-writing committees in Congress.

Oh, and it's probably going to get worse:


Such strategies, as well as changes in tax laws that encouraged some businesses and professionals to file as individuals, have pushed down the corporate share of the nation’s tax receipts — from 30 percent of all federal revenue in the mid-1950s to 6.6 percent in 2009.
Yet many companies say the current level is so high it hobbles them in competing with foreign rivals. Even as the government faces a mounting budget deficit, the talk in Washington is about lower rates. President Obama has said he is considering an overhaul of the corporate tax system, with an eye to lowering the top rate.

And Jeff Immelt, the CEO of GE, the man whose company stiffs the taxpayers while screwing its workers? That guy? He's the chairman of the president's Council on Jobs and Competitiveness.

You're doing a heck of a job, Jeffie!

Posted by Professor Chaos at 8:32 PM No comments: