Joan Swirsky Is One Crazy Tea-bagger!

Joan Swirsky is one crazy tea-bagger! Even amongst the tea-bagger community, she stands out as one of the most bug-eyed, poo-throwing, mouth-foaming lunatics you're likely to run across. How crazy? Well, let's look at one example.

According to the most recent Gallup poll:

Barack Obama’s recent job approval ratings have hovered around 60%. Since they remain above the historical average of 55% approval, he is arguably still in the honeymoon phase of his presidency. Obama's initial approval rating was 68%, generally higher than what other recent presidents had at the beginning of their terms. He averaged 63% for his first quarter in office. Now well into his second quarter as president, his approval rating has stayed above 60% for the most part (Gallup.com)

The majority of Americans — including the Obama constituency of Blacks, Hispanics, gays, feminists, and liberal pundits, et al. — are now having Buyer's Remorse! The only people not cringing at every news cycle and weeping with regret are the radicals in Congress and the union organizers who hope to ride the Obama gravy train into the Socialist "paradise" they've been yearning for — and planning — over the past several decades.
So, apparently, congressional radicals and union organizers make up over 60% of the US population! Either that or Joan Swirsky is running for mayor of crazytown! Oh, Joan, have I got a running mate for you! 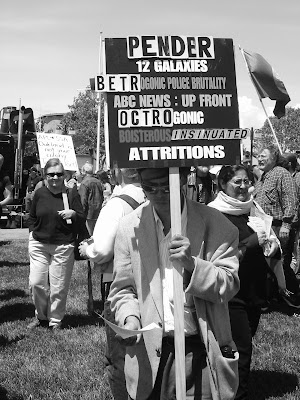 Oh, never mind. He says you're too nutty for him.

But anyway, let's look at the rest of her article starting with the title:

"Domestic terrorists" gear up for July 4th tea parties
On April 15, over a million people — who had already smelled the contaminated coffee of the Obama regime's galloping socialism-cum communism-cum totalitarianism — attended thousands of Tea Parties across the country.
Okay, I think that "million" is probably pretty generous, but even if that is an accurate number, that's one million out of a country of over three hundred million, which means that about a third of one percent of the population showed up for a series of rallies that had been relentlessly promoted by FOX News and talk radio and featured various right-wing media personalities making guest appearances, so let's not act like this represents some major movement or something. seriously, more people tuned in to a rerun of Smallville last night. (source)

when a > 0 and the b is greater than 1, the graph will be increasing (growing).

For this example, each time x is increased by 1, y increases by a factor of 2.

Such a situation is called
Exponential Growth

What your "movement" has been experiencing is not so much exponential growth as a quick fade into well-deserved obscurity. Oh, sure you're going to raise your ugly, dunce-cap-covered heads again on the Fourth, but you are never going to be relevant. You know why? because you are the political equivalent of a UFO convention. You're a bunch of delusional, paranoid nincompoops preaching to your own irrational choir, and those of us who have a grip on reality just roll our eyes at you.

. . .increasingly horrified at Obama's breakneck efforts to destroy free-market capitalism, inflict decades of debt on future generations, spit on the U.S. Constitution and the Bill of Rights, employ a Hitler-like force of ACORN brown-shirts (read what Dr. Paul L. Williams has to say about them here) to manipulate the census and intimidate critics, compromise our military and intelligence services, and ultimately bring about a caliphate of repressive Muslim (Sharia) "law" to the United States of America.
Wow! where to begin?

"Decades of debt?" You do understand that we've been running enormous deficits ever since Bill Clinton turned over the keys to Boozey McSimpleton, don't you? Funny how the so-called "fiscal conservatives" never seem to worry about deficits when they're actually in a position to do something about it. As soon as they're out of power, Oh My God, the DEFICIT!!!!!! 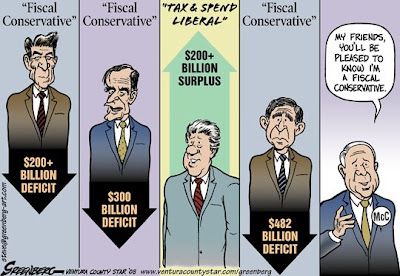 "spit on the Constitution and the Bill of rights?" Refresh my memeory, was it Barack Obama who gave us the PATRIOT Act? Was it Barack Obama who authorized warrantless wiretapping of US citizens? Was it Barack Obama who decided that he could just ignore treaty obligations, eliminate habeus corpus and declare anyone, even US citizens "enemy combattants" and send them off into the black hole of Guntanamo if he decided that that's what he wanted to do?
No, that was the last guy. Where the hell were you teabagger morons then? Now that there's a new president that you've decided you don't like, you imagine that he's attacking your civil liberties and threatening to bring about some bizarre admixture of godless communism and Sharia law. This is all in your head. Seriously, what has Barack Obama done to damage the Bill of Rights? You can't name anything, can you?

Sure enough, a day before the Tax Day demonstrations — which Obama's Press Secretary Robert Gibbs said the "president" knew nothing about — Homeland Security Secretary Janet Napolitano issued a fatwa that declared the extraordinarily peaceful Tea Party attendees de facto "domestic terrorists" — including our military!
That is just so patently ridiculous, it's hardly worth mentioning. But, look. Besides the Fact that Ms Napolitano had fuck-all to do with the report, you just said that the report came out the day before the "tea parties" So how could the report comment on tea party attendees? Do you understand the linear time-line that the real world runs on? And Nowhere in the report does it refer to our military as domestic terrorists. It does mention that domestic terrorist groups may try to recruit returning military personnel. That's completely different. That's like if I told you, "hey keep your daughter away from that dude in the raincoat, he's a child molester," and you say "Oh, my God, you just called my daughter a whore!"

What other ridiculous accusations do you want to lob at President Obama?

[he]Condones the Iranian dictator building nuclear weapons, but slams Israel for building housing.
See, I think you may have dreamed that first part. President Obama has been very clear that he thinks it is important to keep Iran nuke-free. And yes, he did criticize Isreal for building housing on someone else's land. Isreal keeps expanding its territory further and further into Palestine, and for some reason, we're all supposed to cheer for them. Apparently it has to do with some nutty "end-times" scenario or something, but anyway what Obama criticized was Isreal bulding settlements in Palestinian territory.

Stays mute for 10 days as the same Iranian madman incarcerates and slaughters protestors, at the same time as he (Obama) eliminates funding for pro-democracy programs inside Iran.
Do you honestly believe that the protestors in Iran would be helped by US support. The best thing that could happen for the Ayatollahs and Mullahs is to be able to paint the protestors as puppets of the Great Satan. (that's us)

Attacks those who fight terrorism, while letting terrorists go free.
Yeah, neither of those things have happened.

Puts us on the path to a European-dominated (and failed) financial-regulatory system.
Um, I'm not sure what you mean by "European-dominated" (I don't have the time to keep up with all the latest conspiracy theories) but you do realize that we're in the mess we are now because of 20-odd years of de-regulation, right? You do know that, don't you? It was letting the bankers, traders and assorted gamblers run their business however they saw fit that led to the collapse of companies like AIG, Merryl Lynch, Bear-Sterns, etc. Although I guess that to some people, that kind of financial disaster is preferrable to having the dreaded "regulations"! Look, we don't trust people to just do the right thing, do we? No we have laws against murder and robbery and assault, etc, etc, etc. We don't ever say, oh, hell let's se-regulate people and let them do what they want. The free market will keep people from committing crimes. Of course not! So why would you expect that that approach would work any better with corporations which have no soul, no conscience, no sense of shame or remorse, and exist for the sole purpose of returning a profit to their shareholders? It's completely unrealistic to expect that corporations will behave as good citizens without being forced to. Yes, some would, just like many people would not go on killing sprees if the laws against murdere were recinded, but some folks would.

Jeezus! How much longer is this article?

Makes end-runs around the Constitution with an avalanche of Executive Orders and the appointment — ala Stalin — of over 20 Czars.
Ok, two things. One, "czar" is afigure of speech. I believe Reagan appointed the first "drug czar" and there have been others since, and none of them were Romanovs. Second, Stalin appointing czars? That's a laugh! The Soviets deposed the czar. You don't have to be an historian to know how stupid that comparison is. Just because both "Czar" and "Stalin" are words that have to do with Russia doesn't mean that you've made a cogent analogy.

Manipulates the spineless, now state-run leftwing media (ala Putin and Chavez), to spread his hate-America message.
There is no state-run media, you moron. Maybe you're thinking of the last guy who paid columnists to write favorable articles and planted a gay pornographer/male escort in the White House press room. But even that is not "state-run media." Also there is no leftwing media. Well, there is, but it's The Nation, and The Village Voice, and Z magazine, not NBC or the New York times or whatever. The media is a business like any other. It probably shouldn't be, but it is. So the media is biased not to the left or right, but in favor of whatever makes it money. Which means that it will emphasize stories that it thinks will increase readership and eliminate stories that might piss off advertisers. The advertisers, of course, are mainly large corporations, so the media tends to have a pro-big business anti-labor slant, but that's about it. And by the way, if the media is so "leftwing," why would the alleged socialist have to manipulate them? wouldn't they just naturally be on the same side?

Pushes with equal fanaticism to deprive Americans of their Second Amendment right to bear arms.
See, this is only happening in your fevered immagination. Seriously. Obama has not proposed any gun-control legislation. Really. You need to get out of the bubble. If all your "information" comes from listening to Rush Limbaugh and watching FOX, you're going to start believing all their paranoid fantasies. Then you end up like this: 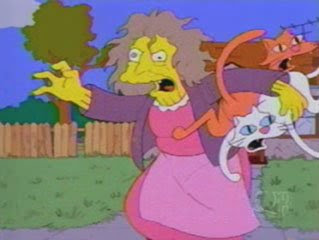 Anyway, this insane article goes on for quite a while longer, but I just don't have the strength. If you want to see the rest of it click here. But I warn you, this takes you into the belly of the birther/teabagger conspiracy beast.
Posted by Professor Chaos at 7:11 PM No comments:

I had to see it to believe it!

ANCHORAGE, Alaska -- Gov. Sarah Palin will resign her office in a few weeks, she said during a news conference at her Wasilla home Friday morning.

What the hell is she up to? There's no way she's resigning because she realized that she's ridiculously unqualified to hold public office. And there's no way she's resigning to spend more time with her props, I mean kids. She's obviously found some way to get her mug in front of the cameras even more than it already is. Daytime chat show? NFL sideline reporter? Co-hosting The View? What could it be? One thing for sure, it will be head-hurtingly stupid!

Oh, my God! She's beginning her run for 2012 already! That's why she's quitting! What an unbelievably self-absorbed narcissist!

Posted by Professor Chaos at 3:45 PM No comments: