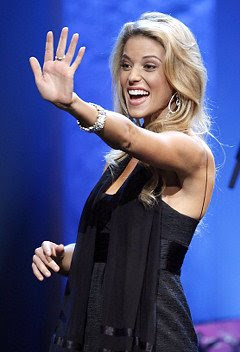 At first, I felt kind of bad for her. It didn't really seem fair to ambush Miss USA contestants with political questions. I mean, it seems like a safe assumption that young women who consent to being paraded around and judged like livestock at a county fair probably don't have a lot of clear, well-thought-out opinions on the issues of the day.

And it seemed like she didn't necessarily have a problem with same-sex marriage, just felt like it wasn't her cup of tea, what with her enjoying winkies and all.

"I think it's great that Americans are able to choose one or the other. We live in a land where you can choose same-sex marriage or opposite marriage," she said at the pageant.

See, so that seems like something a reasonable person might say, although I would think that "opposite marriage" would probably be divorce, but i don't want to nitpick.

"And you know what? I think in my country, in my family, I think that I believe that a marriage should be between a man and a woman. No offense to anybody out there, but that's how I was raised."
So at this point, I'm thinking, Ok, everyone's entitled to their opinion, no big deal, I didn't really think that there was any reason to vilify the little airhead.

And I thought it really wasn't her fault that the right wing chose her as a sort of cause celebre.
Then I read this:

Miss California USA Carrie Prejean announced Thursday she will star in an anti-gay marriage ad sponsored by the controversial National Organization for Marriage.

Sorry, channeling Perez Hilton for a second there!
Oh, and this:

Prejean later said she thought she had lost the contest because of her stance.
Really? Because i was thinking maybe you lost because it's hard to win a beauty contest looking like this: 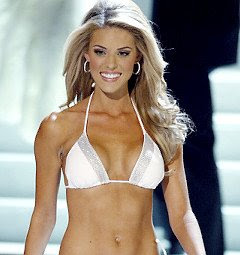 Neither Real, Nor Spectacular

"I was attacked for giving my own opinion on stage at a Miss USA contest, and I'm going to do whatever it takes, Matt, to protect marriage," Prejean, 21, told NBC "Today" show host Matt Lauer.

"The National Organization for Marriage basically just respects, um, you know, marriages and people who support it," she said. "That's what I'm here to do today, protect traditional marriage."

Really? Is that what they do? Just respect Marriage? Have you ever heard of Orson Scott Card? No? Well, most people haven't, he's evidently a fairly popular science fiction writer. There's no reason you should really be all that familiar with him, except that he sits on the board of the National Organization for Marriage. Why is that important? Because he says things like this:

Laws against homosexual behavior should remain on the books…to be used when necessary to send a clear message that those who flagrantly violate society's regulation of sexual behavior cannot be permitted to remain as acceptable, equal citizens.
And this:

How long before married people answer the dictators thus: Regardless of law, marriage has only one definition, and any government that attempts to change it is my mortal enemy. I will act to destroy that government and bring it down, so it can be replaced with a government that will respect and support marriage, and help me raise my children in a society where they will expect to marry in their turn.
Kinda scary, no? And also kinda ironic, since Mr. Card happens to be, wait for it, a Mormon!

Biological imperatives trump laws. American government cannot fight against marriage and hope to endure. If the Constitution is defined in such a way as to destroy the privileged position of marriage, it is that insane Constitution, not marriage, that will die.

Hey, Card! You're really going with the "biological imperative" thing? Cuz, if you're a male, your biological imperative is to mate with as many females as possible to ensure the continuation of your blood line and the survival of the species. You know, like a Mormon. One male - one female lifelong mating pairs are rarely seen in nature (wolves come to mind)
The only reason humans are able to make marriages work is that we are able to overcome our biological imperatives, so let's not pretend that there is some scientific basis to your hatred of the gay people.

Where were we? Oh yeah, Miss California. Hey Miss California, Shut the hell up. No one cares what a second-rate beauty queen/cosmetic surgery demo model has to say about anything of any importance, OK? Do us all a favor and stick to cutting ribbons at Orange County strip malls, and fending off Howard Stern.