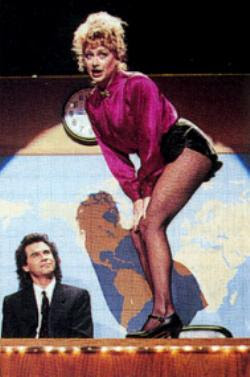 I remember Victoria Jackson taking up space for six years on Saturday Night Live back in the 80's. And i remember her breakthrough starring role in the film Casual Sex? in 1988 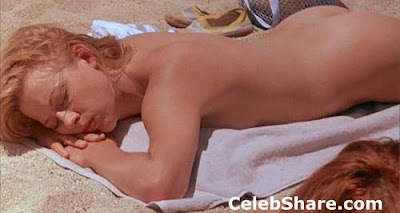 . I never really thought she was funny. Even when she played "Woman in Church" on the Larry the Cable Guy Christmas special, I didn't see the full breadth of her comedic talent. Then back in March, she showed up on FOX shouting crazy shit like:

My motivation is gone, because he will punish me if I'm successful. That's how you start communism, is just take -- Cuba. Obama wants to be Castro.

And I thought, well she must be joking. Because she can't seriously be blaming Obama for her lack of success, because that would raise the question of who was to blame for the whole 1992 to the present thing.
And she couldn't possibly have been serious when she said:

Well, I've never been involved in politics. 'Cuz it's just neh neh neh, neh neh neh. But all of a sudden it was, it was: Oh, Hillary Clinton is a socialist, she wants to socialize medicine. Well, I'll have to vote against her. And then all of a sudden a communist appears! Out of nowhere! And that's when I started to get involved. So I did research. Uh, black liberation theology, his church, is Marxist. And his professors are Marxist. Redistribute the wealth --
But Hannity was buying it hook, line and sinker. And I thought, my God! she's a cross between Stephen Colbert and Andy Kaufmann!
And now the prank is being stretched to Joaquin Phoenix level. 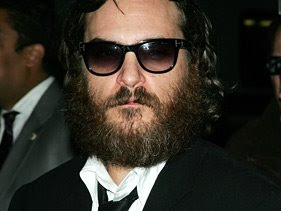 And people are still falling for it. People actually believe that someone could seriously say:

Now he’s going to kill sick people and old people. Did you know that Cap & Trade will allow the government to regulate how long we take a shower? And that the “New Health Plan”, happy, happy, will allow the government to decide who lives and who dies?”
No one could possibly believe shit like that and still be a functioning member of society. This has to be an elaborate prank, right? She's joking, isn't she? She's performing a caricature of right-wing paranoia, right? Look at her latest missive on some website called "Free Republic."

Victoria Jackson: Down is Up, Unfair is Fair and Ignorance is Bliss

I woke up in the middle of the night and realized the trick.

You see, evil doesn’t just show up. It disguises itself as something nice; so you’ll let it in. It tricks you.

Murdering babies is called Pro-Choice. Unfair Censorship is called The Fairness Doctrine. Outlandish Taxes and the Death of Freedom is called Cap & Trade. Sounds like Fish & Chips. You gotta figure out the trick.

See, there's no way that could be serious. Even Ms. Jackson has got to know that the "Fairness Doctrine" was abolished by the Reagen administration, that no one is talking about bringing it back, and that it was the furthest thing from censorship. Also, she's gotta know that Cap and Trade sounds nothing like Fish & Chips. I mean, she's not deaf.

I’d been wondering why the liberals are so passionate about this Health Care thing. It couldn’t be because they actually care about sick, poor people. If they did, they would visit hospitals, and give ten percent of their gross salaries to Compassion International and World Vision
See, nobody could really think that visiting hospitals would be as helpful to sick people as having decent healthcare. And I'm sure she must know that Compassion International doesn't do healthcare. Here's what they do:


So giving money to them wouldn't have any effect on sick Americans.

No, there’s gotta be a catch. I guess this question was sitting in my brain and during my sleep, my brain was working on it, because when I suddenly awoke at 3 a.m. I had the answer.

Social Security and Medicare are broke. Baby boomers, like me, are getting old and will soon be asking for it. Socialized medicine makes people die.
Right, which is why all those European countries with Socialized medicine have longer life expectancies and lower infant mortality rates that we do.

Hitler did this. He killed the weak, the sick, the old, and babies and races/religions he didn’t like. Hitler also controlled the media. (Where’s the public debate between scientists on “Climate Change/Global Warming?”)
Hey, yeah! And where's the debate on this so-called theory of "gravity", hmm?

So… kill off the weak. That’s the plan. Tax the workers to death. Erase the middle class. Sounds like the evil governments we studied in high school long ago. The evil governments were : kings, oligarchies, facist, socialist, and communist. Now it’s called the Obama Administration. Sounds like candy or a rock band.
Mmmmmm, what a delicious treat! Let's name this candy "Obama Administration!" It's sure to be a big seller! Oh, wait, ther's already a rock band using that name. I smell a commercial tie-in!

You know, I’ve been speaking at Tea Parties lately. No one seems to know or care that our country just turned Socialist.
I have to admit, I also don't know things that aren't true. I really should pay closer attention to current non-events.

Posted by Professor Chaos at 6:29 PM No comments: