So here is a new product that I can't imagine anyone really wanted:

Which is basically a flesh-colored bikini top (if you're Caucasian) with nipples painted on it.

I don't know who the target market is for this. I mean, aren't most women  already annoyed by men (#NotAllMen) staring at their breastses anyway? Why give them extra reason to ogle?

And here's the really weird part. It's not being marketed by some sort of Frederick's of Hollywood sleaze merchant. The organization selling these tops apparently thinks they're doing Goddess's work.

Sounds like good advice, but what does it have to do with wearing fake nipples? Hell if I know.


The TaTa Top is far more than nipples on a bikini top. As a brand we work to promote questioning the social norm and digging deeper when it comes to society's expectations.

Apparently, it has to do with the #FreeTheNipple campaign, which is a thing that exisits on social media and may have been started by Bruce Willis's daughter?

Scout Willis has started a movement in NYC after she famously strolled topless in public and tweeted a picture of her selfing using #FreeTheNipple.


Although, if she is Bruce's daughter, I have to think there's a good chance she didn't realize she was topless until someone told her and she slurred "oh, yeah, I totally meant to do that! Free the Nipple, man!"


Now, I certainly have no problem with the ol' baby feeders. They're perfectly lovely and definitely not "dirty" or " lewd" or whatever, but is this really something that a lot of women feel strongly about? In this day and age, when women still earn something like 75cent to a man's dollar, when rape culture not only exists, but seems to get worse and worse each day, when reproductive choice is a pipe dream for women in many states, who thinks that what women really need to fight for is the right to walk around topless?

Do very many women even want to walk around topless?

I'm pretty sure that if you walked up to 100 women on the street and said "hey, did you hear? They changed the law, you can take your top off in public now," about 99 of those 100 women would say something along the lines of "in your dreams, lech!" while reaching for their pepper spray. 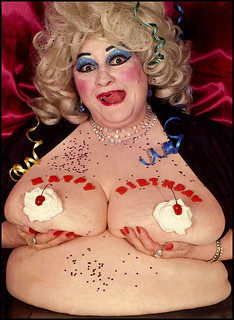 But maybe if you are the wealthy daughter of Hollywood royalty, maybe this is the biggest complaint you have. No one is paying you less than they should because you don't ever have to have a real job. If you ever need to terminate a pregnancy, you can take the private jet to whichever state has the fewest Republicans running things and be in and out and back home for dinner. So maybe the biggest complaint you have is "no one ever gets to see my tits." Or maybe "not enough people are paying attention to them. I mean me. Paying attention to me."

Maybe it runs in the family.