So, did I forget to mention we were going out of town last week, cuz I kinda feel like I forgot to mention that. But anyway, I'm back in town and back in business. So what did I miss while I was gone?

Well,  Oklahoma figured out a new way to prevent women from controlling their own reproductive systems protect the unborn.


This week a bill is sitting on Oklahoma Governor Mary Fallin’s desk waiting for a signature that allows the religious Republicans to revoke the license to practice medicine of any doctor “caught” providing a constitutionally-protected and legal medical procedure.


Honestly, you kinda have to respect that level of deviousness. Well, not respect exactly, but. . . who knew Oklahoma Republicans could be so cunning? I know it's been the approach lately that since you can't make it illegal, just make it impossible to get, but this really takes it up another notch. This could even pass Constitutional muster, since you technically don't have any law against abortion, you just make it a violation of medical ethics. Brilliant! Disgusting and evil, sure, but pretty fucking brilliant.

The evangelical Republicans claim that eliminating a woman’s right to choose is not targeting women or doctors, or that revoking or chasing doctors out of state will not affect the state’s already woeful lack of physicians by enacting an unconstitutional ban. Instead they claimed revoking doctors’ licenses and eliminating women’s choice is how they are combating poverty, drug addiction, erosion of the family and myriad other social issues they claim are destroying Oklahoma’s economy. According to state Representative David Brumbaugh (R), religious Republicans had to do something for the economy quickly because “If we take care of morality, God will take care of the economy.”


Yeah, that's why the economy of the US was pretty much a permanent boom when abortion was illegal.

Thank God we don't have gay marriage or things would really be tough!

So what else happened last week?

Apparently, a bunch of knuckle-draggers went batshit over the most innocuous ad imaginable.
The ad looked like this: 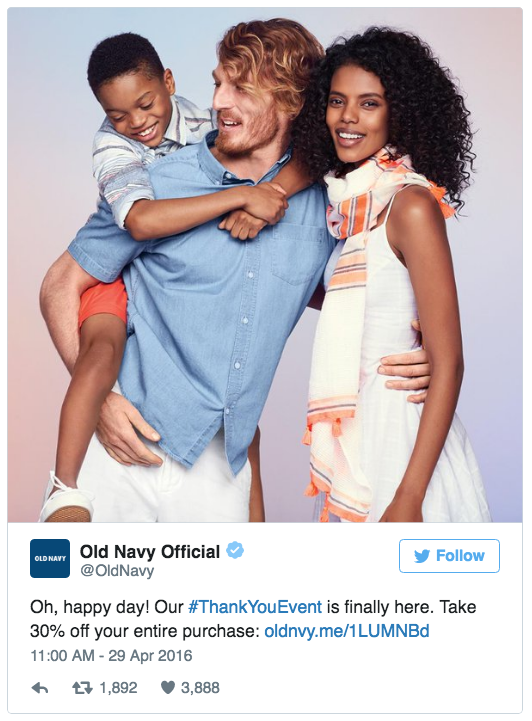 When I saw this ad, I didn't really think much of it. I didn't even think "good for Old Navy, putting an interracial family in their ad." Like most normal people, my only objection to this photo was " no way, she's way out of his league!"

But, because this is 2016 America, there was an ugly hateful reaction from the Twitter troglodytes.

Jeezus! Who even uses the word "miscegenation" anymore without it being accompanied by the phrase "back in those days. . ."
Also, I'm not sure from which direction mixed-race marriage is being shoved down anyone's throat.
I mean, who's the most famous couple in the world right now?


Even fictional couples tend to be pretty monochromatic. 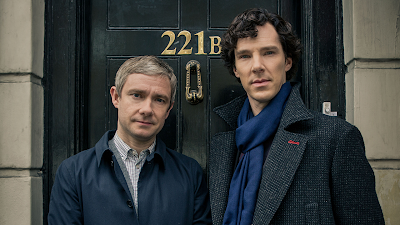 Um, yes. Hence the non-white baby in the photo. No one is arguing the genetics of white babies, whom Old Navy obviously hates - as do we all.

Look at that little jerk!

Honestly, I'm not even sure what this person's objection is supposed to be. Like every baby shown in every ad has to be white or it's genocide? And the kid in the ad isn't even a baby at all. He looks to be about 5 years old. But the important thing is that we all learned a little bit about heredity and genes. It takes two white parents to make a white baby. Good to know. Now whenever you see a white baby you can confidently state "hey, baby, I know that both of your parents are white. I'm pretty much a geneticist."

Right, because a white guy marrying a black lady is pretty much the same thing as committing a horrific crime against a child. And of course it all comes back to people using the bathroom that matches their naughty bits, because that's the right-wing outrage du jour. 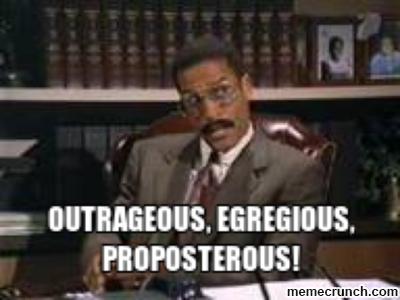 What else? Well, Congressional Republicans have reached yet another all-time low of shamelessness.

On Thursday Republicans in Congress voted to overturn a rule, proposed by the Obama administration, which requires investment advisers to act in the best interest of the person they are advising.

Wait. So there's a rule that says that financial advisors should please refrain from fucking over their clients, and the GOP Congress looks at that rule and says. . .what, exactly? What even is the objection to the don't-cheat-grandma-out-of-her-life-savings rule?

I couldn't find anywhere that they even bother trying to rationalize this position. All I could find is that they supposedly have their own bills that will do the same thing but better and way cooler than dumb old Obama's rule.

Well, there's plenty more that went on last week, but we'll have to continue this tomorrow because I'm tired and you can't make me. Did that even make sense? Probably not. But I'm too sleepy to edit.