How is this guy still on the air? 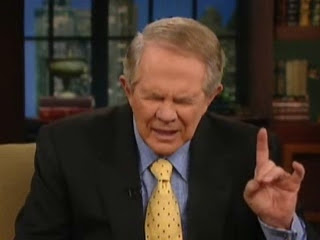 This guy is one sick motherfucker!


During The 700 Club's "Bring It On" segment, a viewer asked the TV preacher why God let Christians suffer while Hollywood celebrities enjoyed so much wealth.

Okay, first of all, those two groups are not mutually exclusive. I don't know how many Hollywood celebrities are Christians because I don't care, but I'd be willing to bet it's a pretty healthy percentage. I'm sure if I could stand to watch an awards show, I'm fairly sure I'd see a lot of Hollywood celebrities thanking God for helping them win some dumb trophy. Also, there are members of every religious group suffering. It's not like God or Fate or the Universe is picking on Christians. You don't think there are a lot of Muslims suffering in places like Iraq or Syria or Somalia?
But anyway. . .


Wait, what?
Is this lunatic really saying "Hey, cheer up! They may be rich now, but they're going to Hell?"
And the reason they're going to Hell is because God put them onto this slippery slope to eternal damnation? Like, they're going to be sent to an eternity of torment and it's not even their fault? It's God's fault for putting them on the Super Fun Happy Slide?

Also, the caller didn't mention anything about gay celebrities. And I'm pretty sure that most of the wealthy Hollywood celebrities aren't even gay. Who are the biggest stars in Hollywood right now?
Tom Hanks? Married to a lady.
Brad Pitt? Probably not married, but definitely making babies with a lady.
Tom Cruise? Well. . . . it's none of my business, but he certainly isn't "living this gay lifestyle." He's a serial marrier of ladies.
Who's the biggest LGBT star in Hollywood? Neil Patrick Harris? Ellen Page? The guy from Big Bang Theory?
Why does everything have to be about the gay with these preachers?


"And on the way, by the way, look at how many people commit suicide," he continued. "Some of the well-known famous people, they shoot themselves or they overdose on drugs or they have multiple marriages. And they're not happy because they don't know the Lord."


How many celebrities do you think are committing suicide?
I can only think of a couple. Robin Williams comes to mind. Heterosexual Episcopalian  Robin Williams.
Philip Seymour Hoffman committed suicide. He was a heterosexual Catholic, but still somehow managed to not be happy despite "knowing the Lord."
I don't know whether Heath Ledger was religious or not, but he was certainly hetero. (Insert your own Brokeback Mountain joke here)

Any way, the point is that Sicko lunatic Pat Robertson is telling people that they should feel better about their own lives because the rich and famous are probably going to commit suicide and will definitely be spending eternity in Hell. How in the Hell is this guy still on the air?