Oh, My God! They Exploited Kenny! (You Bastards!)

A young man named Kenneth Gladney is being held up as a martyr by the anti-healthcare folks because he was supposedly "beaten and kicked by union thugs" at a town hall meeting.

Although he was too weak to speak after his beating on Thursday, black conservative Kenneth Gladney attended the SEIU rally. Kenneth was beaten, kicked and called racist names by Russ Carnahan’s SEIU supporters after a town hall meeting on Thursday.
This would be a really sad story if it were, um you know, what's the word, um, TRUE!

Here, via Sadly, No! is video of the incident. You can see Kenny fall down, get back up, and confront someone about "Why did you hit my hand?" He's obviously fine in the video, but now he's being paraded around in a wheelchair. Pathetic!


But that's not the funny part.

A bunch of teabagger idiots showed up to protest at the local SEIU offices. The offices were closed. They protested anyway.

On Saturday, Gladney sat in a wheelchair, his knee bandaged, holding a flag that read: “Don’t Tread on Me.” Others who gathered at the union offices held signs with a slightly different version of the message: “Don’t Tread on Kenny.”

The union offices weren’t open, and the union didn’t send members to attend. The Associated Press

But that's not the funny part.

[Gladney's lawyer] Brown finished by telling the crowd that Gladney is accepting donations toward his medical expenses. Gladney told reporters he was recently laid off and has no health insurance.

That's right, even if your injuries are totally fake, you still get a bill from the Emergency Room where you went to give your fake injuries the veneer of non-fakeness. And the new poster boy for leaving corrupt, greedy insurance companies in charge of our health care? H doesn't have insurance, and is reduced to BEGGING STRANGERS for money to pay his medical bills! 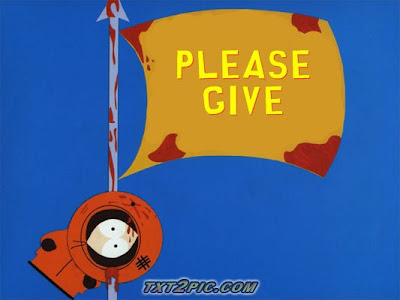 See, this would never happen in Canada, Or England, or France, or Germany, or Japan, or Sweden, or The Netherlands, or pretty much any civilized country but the good old U.S. of A. Uh-oh. I think I just made it not funny anymore!
Posted by Professor Chaos at 5:54 PM 2 comments: