'Joe the Plumber': 'Put a fence on the damn border and start shooting'

PRESCOTT, Ariz. -- The man nicknamed "Joe the Plumber," during the 2008 presidential campaign told crowds in Prescott the solution to securing the border is putting up a fence and shooting at illegal crossers.
He first made the remarks Friday night at a campaign event for Republican state lawmaker Lori Klein, who is now running for a state House seat in District 1.
"For years I've said, you know, put a damn fence on the border, going to Mexico and start shooting," Samuel "Joe" Wurzelbacher told a crowd at a fundraising dinner.

He reiterated the comments the following day at a "Patriot Rally" with Klein, saying: "I'm running for Congress. How many congressmen or people running for Congress have you heard, put a fence up and start shooting? None? Well you heard it here first. Put troops on the border and start shooting, I bet that solves our immigration problem real quick."

Because sneaking in to the country is obviously a capital offense.

Email ThisBlogThis!Share to TwitterShare to FacebookShare to Pinterest
Labels: Joe the plumber

Soledad O'Brien has had enough of this bullshit

Soledad O'Brien has had enough of being lied to. 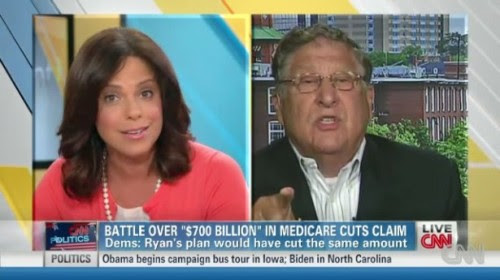 he chairman of presumptive Republican presidential nominee Mitt Romney’s national steering committee on Tuesday angrily shouted for a CNN anchor to “put an Obama bumper sticker on your forehead” after she tried to fact check Republican claims about Rep. Paul Ryan’s (R-WI) plan to overhaul Medicare.
CNN’s Soledad O’Brien pointed out to Romney surrogate John Sununu that the candidate’s plan would turn Medicare into a voucher system much like the budget proposal offered by his vice presidential pick, Paul Ryan.
[…]
“I understand that this is a Republican talking point because I’ve heard it repeated over and over again,” O’Brien observed. “These numbers have been debunked, as you know, by the Congressional Budget Office. … I can tell you what it says. [Obama’s plan] cuts a reduction in the expect rate of growth, which you know, not cutting budgets to the elderly. Benefits will be improved.”
“Soledad, stop this!” Sununu shouted. “All you’re doing is mimicking the stuff that comes out of the White House and gets repeated on the Democratic blog boards out there.”
“I’m telling you what Factcheck.com tells you, I’m telling you what the CBO tells you, I’m telling you what CNN’s independent analysis says,” the CNN host explained.
“Put an Obama bumper sticker on your forehead when you do this!” the frustrated surrogate shot back.
“You know, let me tell you something,” O’Brien said. “There is independent analysis that details what this is about. … And name calling to me and somehow by you repeating a number of $716 billion, that you can make that stick when [you say] that figure is being ‘stolen’ from Medicare, that’s not true. You can’t just repeat it and make it true, sir.”
(via Romney surrogate to CNN host: ‘Put an Obama bumper sticker on your forehead’ | The Raw Story)

CNN: You can't just repeat it and make it true.
Posted by Professor Chaos at 10:43 PM 2 comments: