Senator James "If I don't understand it, it can't be true" Inhofe's Facebook page is proudly featuring photos of his horrid little grandchildren in a homemade igloo.

Ordinarily, kids playing in the snow should be adorable,but this is the Inhofe family, so you know it's going to be something awful or stupid or both.


And sure enough, here is the title of this set of photos:

Classy move, Senator. Getting little kids involved in your smear campaign against science!

Because Al Gore invented global warming and it's cold today, so he has to, um, live in an igloo? Or something, I guess?

Honk if you love Global Warming? I don't even get that one.

So here, I think, is what we're supposed to take away from this demonstration:

1) It's cold today, so Global Warming can't be real.

2) If you mock the messenger, the message becomes untrue.

4) Ignorance is a virtue.

5) Children needn't respect their elders if those elders believe in science, or are otherwise weiners.

6) Every legitimate scientist in the world is wrong because Grandpa says so.

Honest to God, Inhofe is such a dunce it's barely worth pointing out how wrong he is. 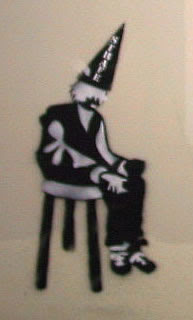 First of all, pretending that Al Gore came up with the idea of Global Warming is like saying that the Rolling Stones invented the Blues.

Secondly, the fact that the DC area is having a lot of snow is not only not evidence against global warming, it's actually one of the things you'd expect to see on a planet whose climate is getting warmer.

As National Wildlife Federation climate scientist Amanda Staudt notes, winter storms are getting fiercer even as the season gets warmer. “The last few years have brought several unusually heavy snowstorms as warmer and moister air over southern states has penetrated further north, colliding with bitter cold air masses,” she explains.

Warmer air holds more moisture. More moisture means more precipitation. It's pretty simple, I don't know anything about climatology, and I can understand this simple concept.

Plus, NASA just announced this:

2009 was tied for the second warmest year in the modern record, a new NASA analysis of global surface temperature shows. The analysis, conducted by the Goddard Institute for Space Studies (GISS) in New York City, also shows that in the Southern Hemisphere, 2009 was the warmest year since modern records began in 1880. . . January 2000 to December 2009 was the warmest decade on record.

So, even if we use the Inhofe method of anecdotal evidence (Uh, seems pretty cold to me, so fuck you, Al Gore) the evidence of the last decade overwhelms the data of these last few days being snowy.

Honest to God, Oklahoma, aren't you embarrassed to have this obtuse windbag representing you? Can't you find anyone else to send to Washington? Don't you know that when people see this asinine ignoramus with "R-OK" next to his name that they laugh at you? Seriously, you've gotta find someone else.

Or this guy. Sure, he's an inanimate object, a pen and ink drawing, but at least he won't spew the kind of ridiculous BS that makes your state a laughingstock.

Posted by Professor Chaos at 4:39 PM No comments: