Who's got two thumbs and is the most corrupt state in the Union? This Georgia!


Look out, New Jersey! Step aside, Illinois. The great state of Georgia is staking its claim to the title of Most Corrupt State in the Union.


We had a n election a little while back. You probably heard about it. Potential rising star Stacey Abrams ran for governor against slimy smarmy shady Republican Brian Kemp. 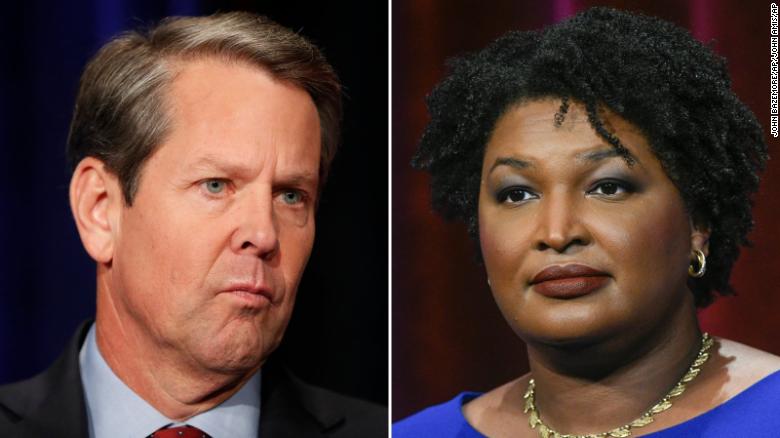 The reason that you might have heard about the governor's race in our humble little state is that Brian Kemp, in addition to being one of the two candidates,was also at the same time, serving as Georgia's Secretary of State. I don't know how things work in your state, but here in Georgia, the Secretary of State is in charge of elections. So one of the two candidates for governor was the person who decided how many voting machines were allocated to each precinct, how much early voting would be allowed and who would be considered an eligible voter. And he smugly refused to hand over any of those duties to someone else. Now, this may come as a shock to you, but as it happened, heavily Democratic districts somehow ended up with fewer voting machines while, coincidentally, many voters with black-sounding names found themselves inexplicably removed from the voting rolls.

Now we find out that the votes were counted not by election workers, but by one of those shady-as-hell voting machine companies. ES&S. (whose business address is, I just discovered, 11208 JOHN GALT Blvd.)

Yes, ES&S was given a $300k contract BY BRIAN KEMP to count the votes in Brian Kemp's election which was overseen by Brian Kemp. And by a felicitous turn of luck, the winner was Brian Kemp. And no one is going to ever do anything about it.

Can it get worse? hahahaha of course it can! We're talking about Twenty First Century Republicans!

Okay, Georgia is one of those states where you have to show a driver's license to vote. Because otherwise, I would just put on a variety of different wigs and false moustaches and pretend to be all my neighbors and co-workers, casting votes for left-wing candidates in their names. And no one would be the wiser!

Anyway, there are in Georgia some people from Puerto Rico. I don't know how many, probably more since the big hurricane, but there are some. And these people from Puerto Rico are, as you know but your conservative relatives do not, American citizens. Meaning that they can vote once they get Georgia driver's licences. Which should be a pretty simpole thing to do. I moved here from California and went to the DMV or whatever they call it here and basically traded in my California license for a shiny new Georgia one. Simple. Buuutttt, I guess someone figured out that Puerto Rican people might not be all that eager to vote for a party whose standard-bearer they last saw hucking paper towels at them while their island was drowning.

So now there's this:

When I came here from California, I was asked ZERO questions about local politics, geography, sports or music. I am a white guy, but that's probably just a coincidence.

We now have a bit more information on this state Department of Driver Services policy. Specifically, we have the 43 potential questions that the DDS has put together in a “Puerto Rican Interview Guide.”

Okay, how is that even legal? How are they even allowed to have an interview guide for a specific ethnicity? I mean,. I know no one cares about the law or the rules any more since the 2016 election, but holy fuck, this seems blatantly illegal. I hope someone is getting lawyers involved.

A copy of the guide was provided by attorneys for Kenneth Caban Gonzalez, who says he’s waited 600 days for his Georgia driver’s license – and still doesn’t have it.

The DDS document says the material contained within was “taken from Diplomatic Security Service PR Interview Guide,” but it’s not clear whether that’s a federal source.


Well, the Diplomatic Security Service is definitely a federal organization, but the Georgia Department of Driver Services has no business coordinating with them or using their materials. I assume that this "interview guide" is intended to trip up Cuban spies who are trying to pass themselves off as Puerto Ricans for nefarious purposes. The state licensing bureau should have no aithority to "interview" anyone on their place of origin.

Now, as we were saying, the “Puerto Rican Interview Guide” has its trick questions:

-- “Where is Caguas Beach? Caguas is the largest inland city and has no beach.”
-- “How long is the San Juan-Fajardo train ride? There is no train.”
-- “How do citizens of Puerto Rico vote for President of the U.S. They cannot vote for the U.S. President.”

So the point of this is, what? To try and get a wrong answer form someone who maybe doesn't speak great English and might misunderstand the question so that you have an excuse to deny that person a driver's license?

Updated at 6 p.m.: Shevondah Leslie, the DDS director of communications, just called to say that the “Puerto Rican Interview Guide” was never authorized by DDS authorities, but was unable to say in whose possession the document was in when it surfaced during the lawsuit discovery process -- last December, before Kemp took office.

So no one even knows how or why they have this thing? I mean,we know why. but they don't even have a rationale?
And Kemp may have had nothing to do with this, but Georgia has been run by slimy crooked Republicans since we moved here. )Our last governor was the unscrupulous Nathan Deal. Before Deal, it was Sonny Purdue who is currently serving as tRump's Secretary of Agriculture).


“Governor Kemp expects state employees to follow the law and treat every constituent with dignity and respect. Our team has spoken with DDS Commissioner Spencer Moore and asked him to conduct a full investigation into these claims.”

Oh, good! Because if you really want to get to the bottom of soemthing like this, the best way is to have the agency investigate itself!
Problem solved!