How is this not a bigger story?

This is Patrick Little:

He looks like a typical alt-right douchebag and in most ways he is.
But there is one difference between Patrick Little and your average Pepe.

Patrick Little is running for the Senate. In California.
Is he going to win? No. BUT, he is currently in the lead for the Republican nomination!

How "alt-right" could he be and still be the front-runner for one of the two major political parties in California you ask? Well. . . this much: 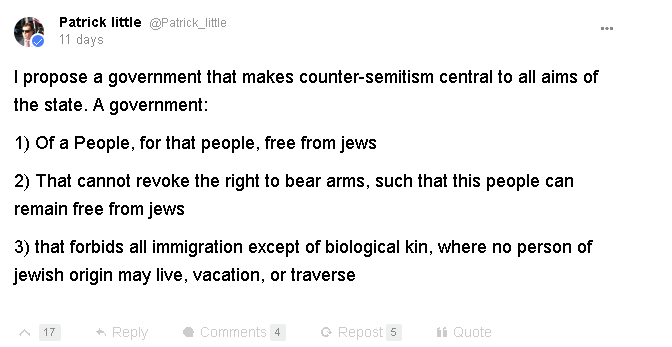 Now I get that it's not exactly news that this country is lousy with neo-Nazis. And if you've ever lived in California, it comes as no surprise that California has its fair share of skinheads (I lived in Orange Count for a while. You'd see "death to race-mixers" decals on signposts fairly regularly.) And it's not surprising that in the era of Il Douche, more of these sick fucks are turning up to run for office. But how is it not major news that a god damn Nazi is leading in the polls in the most populous state in the Union?


According to "The Hill," the California Republican Party has issued a tepid condemnation of Little:

The California Republican Party has denounced a Republican Senate candidate who has denied the Holocaust happened and called for a country "free from Jews."

“Mr. Little has never been an active member of our party. I do not know Mr. Little and I am not familiar with his positions,” Matt Fleming, communications director for the California Republican Party, told Newsweek. “But in the strongest terms possible, we condemn anti-Semitism and any other form of religious bigotry, just as we do with racism, sexism or anything else that can be construed as a hateful point of view.”


Yes, a desire to exterminate Jews could be "construed as a hateful point of view."

But I can't find any statement from the National party or any member of the GOP leadership, or anyone with any name recognition. Apparently the Mitch McConnels and Paul Ryans either can't be bothered, or are too aware of their need for the skinhead vote, or just have no problem at all with a god damn Nazi representing their party on the California ballot.


So there is one small silver lining here. I was disappointed that Kevin de Leon wasn't making much headway in his primary challenge against Diane Feinstein, but at least I will get to watch this anti-Semitic piece of shit get crushed by a Jewish woman.