Rep. Eric Swalwell: "I pledge to lead our country with a team of rivals, a blended cabinet of Republicans and Democrats, not because it will be easy -- and we may have to send out a search party to find more Republicans who can put country over party." https://t.co/PFoTN6OcbT pic.twitter.com/Qz6Or8920U
— The Hill (@thehill) April 15, 2019


Who thinks this is a good idea? Or that it's even possible?
Eric Swalwell is apparently a United States Congressman (he has the title "Rep." in front of his name) and he still has no idea how things work in DC?


Swalwell is making gun control the key theme of his campaign and good for him. That is an issue that needs to be addressed and dealt with.

In his remarks, Swalwell laid out specific agenda items, including a ban and buyback program for assault weapons and universal background checks for all gun purchases.


Great. But do you think you're going to acheive any of that by working with Republicans?
First you're going to need to find a Repuiblican that hasn't posed with an assault rifle as part of his or her campaign material. 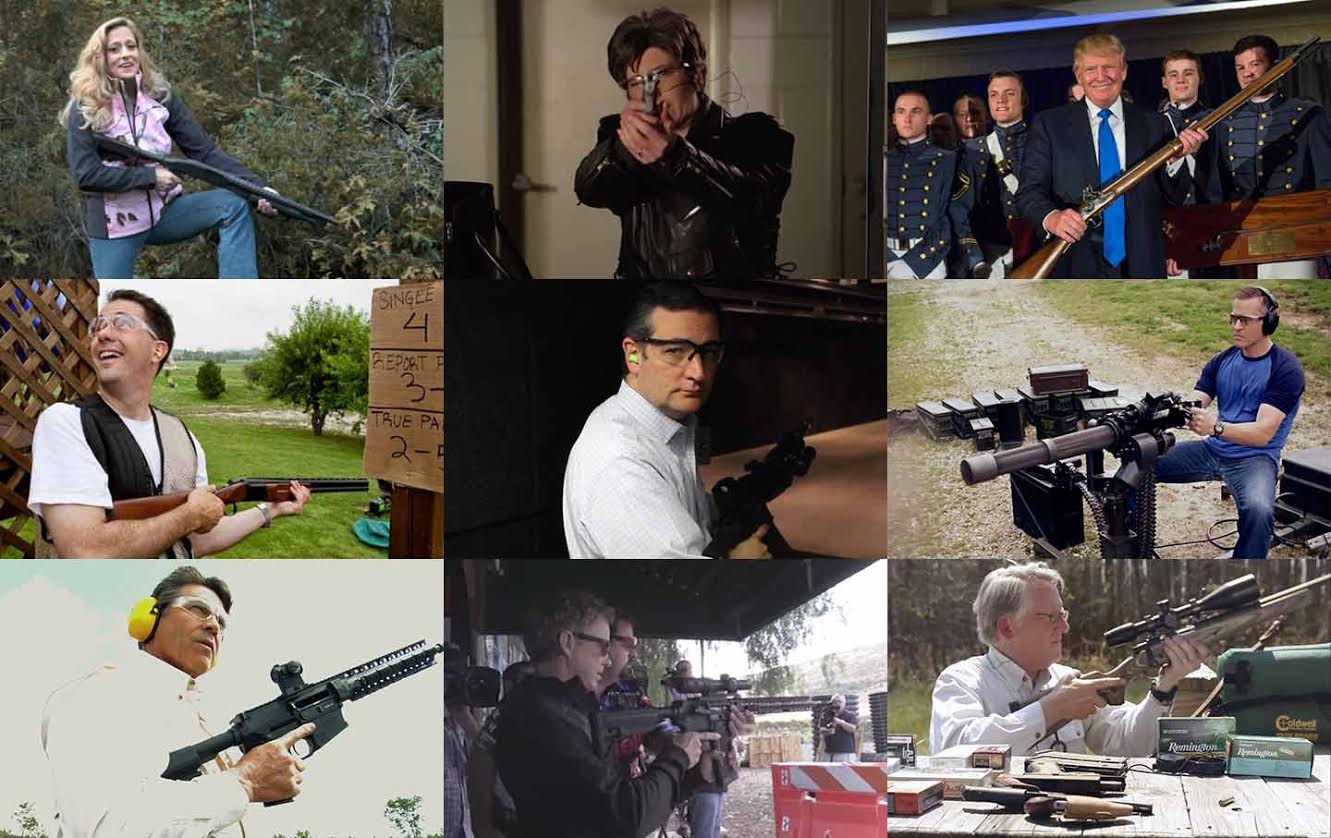 Why would you think that you could find Republicans willing to serve in your cabinet for any purpose other then to sabotage you at every turn?

This guy has been in Congress since 2012! (I looked it up) And he STILL thinks that there is some way forward involving bipartisanship? Does he think bipartisanship is still a thing that exists? Is he too young to remember Newt Gingrich taking bipartisanship out behind the Capitol building, strangling it, dismembering it, then defiling the corpse while smiling for the C-Span cameras?

Dude, you've been in Congress for 6 years. In all that time have you never met Mitch McConnel?
Do you not remember the Obama Administration? Do you not remember McConnell stating that his main goal was to prevent Obama from being re-elected? And then he and John Boehner threw monkey wrenches into the gears at every opportunity. Remember the ACA? Obama took a Republican plan, conceived by the Heritage Foundation, implemented by Mitt Romney, and offered it up as a bipartisan solution to our nation's healthcare woes. Dis it get a single Republican vote? No, it did not. Have the Republicans made every effort to sabotage and disable it? Yes, they have. Did they vote over and over again to repeal it? You bet.  Why do you think they did that? Do you think they had any legitimate objections to the program? Did they actually believe there were "death panels?"  Of course not. Just like they didn't actually believe that they were standing on some sort of principle by refusing to even consider anyone that Barack Obama might appoint to the Supreme Court.

I would be more baffled by where this instinct towards reaching across the aisle and finding common ground comes from, except for a podcast I've started listening to. It's hosted by Dave Anthony and Josh Olson and it's called "The West Wing Thing."

The theme of the podcast is that, while the West Wing was an excellent television show, it has had a pernicious effect on Democratic politics by convincing a generation of liberal politicians, campaign workers, pundits and party operatives that the Jeb Bartlett presidency is something to emulate. That if you just get enough really smart Ivy League grads together, they can work out any problems while being wise enough to not attempt to go "too far." Timid incrementalism recast as "practical Idealism," a term which means nothing. 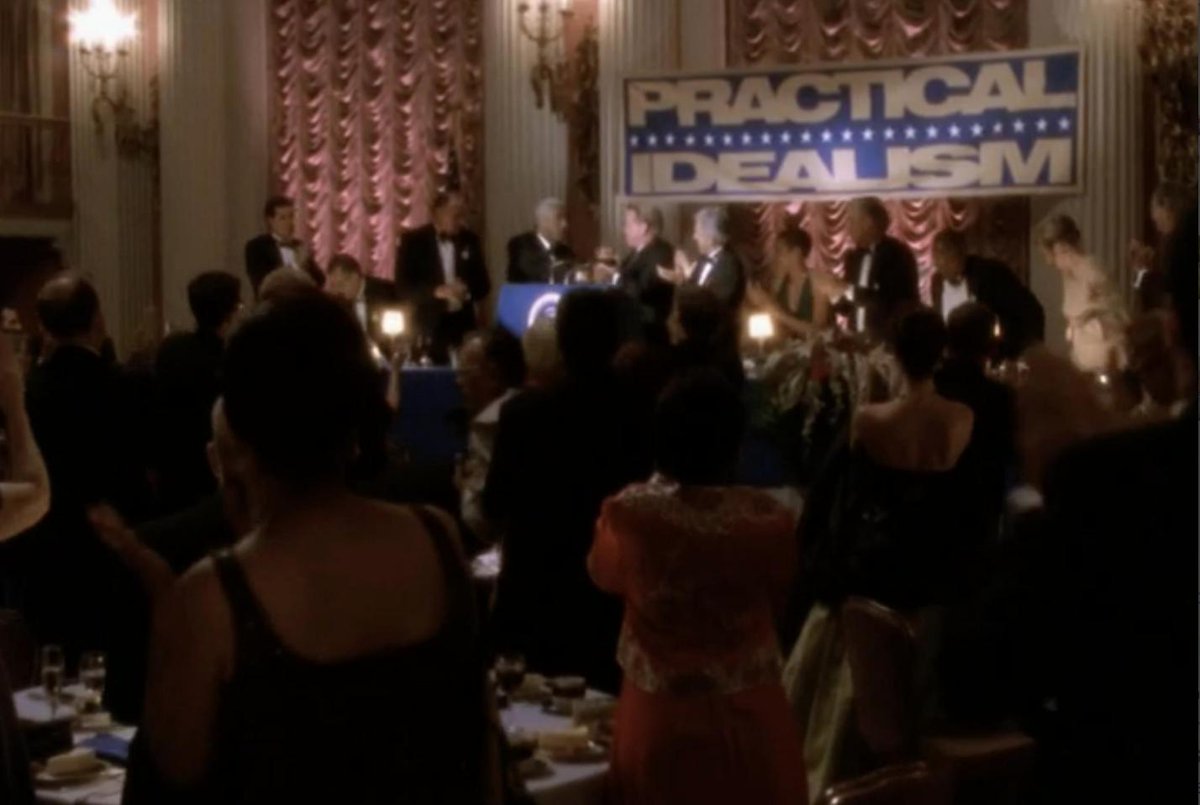 On the most recent episode, (Episode 4) they played a clip of Leo (Jon Spencer) explaining to a Congressmember why their gun control bill had been watered down to the point of ineffectiveness. Leo says, and I'm paraphrasing here, "Come on, you know how this works. We got to make progress inch by inch!"

Now, in the real world, progress can not be made "inch by inch." I mean, it can. It just shouldn't. There's not a lot of point to saying that we'll eventually have universal healthcare like other civilized countries after we're all dead. Maybe your grandkids will see it in their lifetimes. You need to go big. That's something that Barack Obama never seemed to understand. If you want to get the ACA passed with a public option and mandatory Medicaaid expansion, you don't offer that up as your opening bid. You begin with saying that you want a system modeled on the UK's National Health. Then you have room to negotiate down. And maybe you get that public option that would have made the ACA worht a hell of a lot more than it is. And maybe you get Medicaid expansion that GOP governors can't refuse just because it has a Democrat's name on it. You have to come in with big ideas. "Practical Idealism" is not going to accomplish anything. Especially with this crop of Republicans.


As if the world couldn't get any worse. 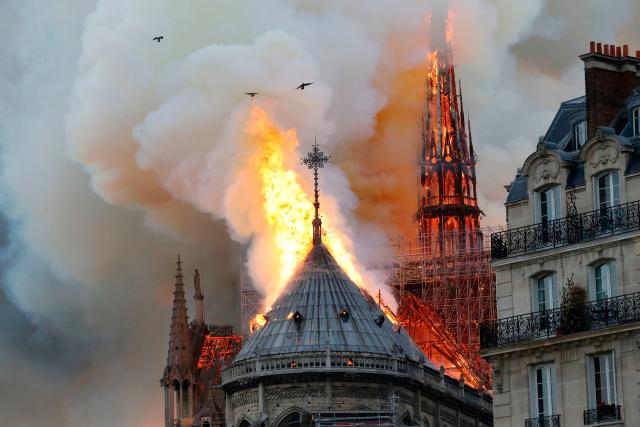 It looks like we are losing one of the iconic works of European architecture. 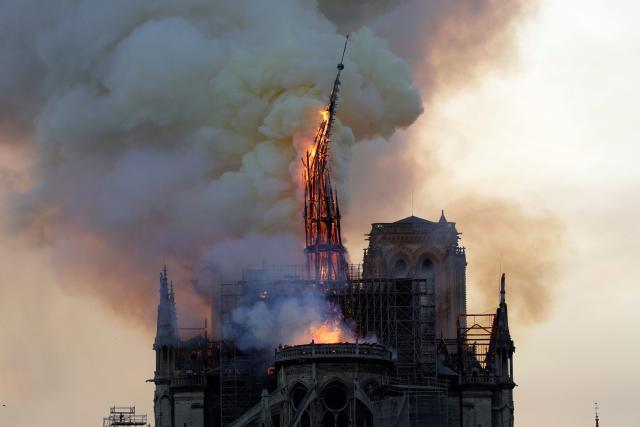 And of course the Oaf in Chief had some "thoughts" on the subject.

So horrible to watch the massive fire at Notre Dame Cathedral in Paris. Perhaps flying water tankers could be used to put it out. Must act quickly!
— Donald J. Trump (@realDonaldTrump) April 15, 2019

Because, sure, the Fire Department of Paris needs your advice. Because it never would have occurred to them that they need to "act quickly."
Also, you know who knows more about fighting fires than you, President Dolt? The professional fire fighters of the Paris Fire Department. (Also, probably anyone who's seen an episode of Adam-12.)

As a matter of fact:

France's civil security agency says "all means" except for water-dropping aircraft were deployed to tackle the blaze, per the Associated Press. The defense agency said those were unsuitable for fires like the one at Notre Dame because dumping water on the building could cause the whole structure to collapse.

Now, to be fair, I wouldn't have known that either. BUT, I would have known that I don't know how to fight fires and that the professional fighters of fire in Paris didn't need me chucking my 2 cents in.

Anyway, this is hitting me harder than it should. Apparently, no lives have been lost. But to see a symbol of this great city, a structure which has withstood wars, revolutions, and everything nature could throw at it for nine centuries, just going up in flames. It hurts. It's just so sad.